The other day someone online, noting how often I reference my deconversion, told me my story was unremarkable.

And I thought “Of course. That’s the whole point“.

I reference it specifically in my defenses of outspoken, confrontationalist, evangelical atheists who offend liberals’ sensibilities and are accused of theological ignorance because so much of the pushback we receive treats us like we are pig-ignorant elitist outsiders to religion rather than people who were intensely religious, have their own religious experience, and have earned the right to their judgments and their criticisms of the religions that dominated their minds and hearts and “spirits” for so much of their lives.

I forefront this because otherwise tolerant liberals think nothing of telling apostates that we’re the one set of people who are not entitled to our views on religion. I forefront this to connect atheism directly to my own personal religious experience for those who supposedly think that religious experiences deserve to be respected no matter what they are. I want to say to them you can’t dismiss us former believers’ rights to air our grievances. You scoffingly wonder why this bothers me so much? Why I won’t just let it go and leave the religious alone? Why don’t you care about the ways they are using every intellectually, emotionally, and spiritually manipulative tactic they can so that their religion controls our every thought, our every feeling, our every relationship, our political views, our ethics, our very sexuality and gender themselves. Religions can be an all consuming, all controlling, overpowering forces in people’s lives. People who succumb to this do not just have a character flaw. We are systematically miseducated in our moral consciences and our reasoning habits. They nurture our childish superstitions rather than train us out of them. They teach us how to rationalize instead of how to think skeptically. And they terrify us about the prospect of life outside the church. Our earnest consciences yearning to be good, our deepest family relationships, our communities all conspire to brainwash us into thinking these religions are the be all and end all of everything.

Then when we deconvert, they try to bully us back into the fold, they mischaracterize us and say things to us that make it sound like they never knew us at all. They attack our integrity. They sneer at us. They try to silence us. They tell us we’re a bad influence on others. They threaten to cut us off. Sometimes they even do it; disowning us, divorcing us, driving wedges between us and our kids or our parents. And when none of this takes, then they have the fucking audacity to ask us why we can’t just let it go. Why do we care so much about what we don’t believe in? This is their last ditch strategy when we can’t be reconverted and we can’t be shut up. They try to gaslight us as crazy for caring about something we don’t believe in. And the mainstream media and the liberal untroubled by religion looks at us and just sees needlessly angry “smarter-than-thou” people who are too intolerant to allow the benighted masses their harmless little fantasies without calling them “stupid”. We need our stories to be a regular part of the public discourse to put lie to these mischaracterizations of us.

They spend decades of our lives drumming into our heads and hearts that what they have to say is the most important thing in the world, that our very souls hang on it. And when they can’t control us anymore, when we rebel and think for ourselves, when we start exposing their lies with none of the deference they’re accustomed to, they try to tell us it makes no sense we would care about any of this or about their role in the world.

I write about my deconversion because when I deconverted I had no longstanding atheists to help me with the difficult process of deprogramming from my cultish conditioning. While I was afraid of deconverting I had no role models on the outside letting me know it was okay to not be a Christian, that life went on on the other side where I had been utterly brainwashed not to countenance that as even possible. I write for apostates and other atheists who benefit from my skills at articulating their own thoughts in reply to what they have to put up with and arguments they are inundated with. And I write because I want to be part of the movement to create and more widely disseminate the alternative philosophies and rituals and community resources that can give people a place to land when leaving faith and can provide robust alternatives to meet people’s “religious” needs so they don’t turn to theistic, authoritarian, faith-based religions, believing they’re the only game in town.

I don’t write about my deconversion because I think it is unique.

I write about it precisely because it’s not.

You can find my series on my deconversion here. 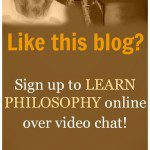