Dear Fellow Atheists, STOP Saying Christians Believe God is a Bearded Man in the Sky. They Don’t. May 10, 2014 Daniel Fincke

So, I’m an atheist blogger and a professional philosopher. So this puts me in the unenviable position of having to deal with ignorant atheists who not only disparage philosophy but disparage sophisticated theology without understanding it. And honestly it makes me wince sometimes. I believe we can do better. We can make better arguments that address Christians’ real positions, rather than beat up on straw man versions of their arguments.

And it’s important to note that Christians don’t believe in such silly and absurd things like that God is a man in the sky with a beard. I used to be a devout Christian and I never thought any such silly thing. God is ineffable. God cannot be material. God cannot, as sophisticated theology and philosophy teaches us, be “a” being at all. God is, rather than ineffable ground of all being or Being Itself. God is that from which all other beings derive their essence and that by which they are instantiated in reality. To call Him merely “a” being would be absurd since that would imply He was just one of the beings rather than that inexplicable, self-existence in which, and through which, all those beings have their being.

And Christians are very knowledgable about theology. They understand all this. The average person in the pew would leave Christianity tomorrow if you told him its true meaning was that there was an old man in the sky with a beard who has human emotions and thinks human-like thoughts. He would laugh you right out of his house if you talked about God in such anthropomorphic terms. A sophisticated theologian would fail you for being about 2,000 years behind the curve on human knowledge if you indicated you thought about God as being anthropomorphic like that. God is not a human just because we use human metaphors to describe God any more than I am a rock just because my best friend says to me, “Dan, you are my rock in times of trouble.” And we atheists need to understand that Christians are not ridiculous. They only ever mean to speak metaphorically about God. When Christians refer to God as “father” they don’t mean anything so literal as that God was a man who had sex and conceived them through that. They obviously say God is a father only in order to express in human terms that the “Ground of all Being” is the source of our being. This has been known for centuries of Christian thought.

And of course when they pray, they don’t expect the Ground of All Being to alter reality for them as though it responded to their whims. When they pray to God it’s just their way of expressing their gratitude and meditating upon the Ground of all Being and its eternal emanation of reality. They’re not silly enough to believe that all they need to do is ask for something and the Ground of all Being is going to say, “yes, ma’am, I’ll get right on it” like it’s their servant jumping to action at their every beck and whim. Pointing out to them that prayers don’t get answered with any more regularity than mere wishes do misses the point. Prayer is not about getting what you want, it’s about being close to God. That’s all.

And they don’t believe in the nonsense about heaven being a bunch of harps and pearly gates and clouds. They fully understand that “heaven” just means being in the presence of the Ground of all Being eternally. Hell is just the absence of God. No red demons with yellow horns and spiky pitchforks there! Refuting silly cartoon ideas about heaven or hell as physical places just shows atheist ignorance.

And since God must be an eternal, non-corporeal, non-temporal being from which all reality comes, it is a straw man when atheists confuse a human being for God and accuse Christians of literally thinking that this corporeal, temporal, being can be God:

Give Christians some credit. They’re not superstitious philistines. They know it’s impossible for God to be a human being. They know he doesn’t have a beard. They know he doesn’t live in the sky. They know God can’t literally be a “he” at all! When in Acts 1:9-12 Jesus flew up into the sky and disappeared when he passed through a cloud–that’s not a real story! Reading it like a real story makes it sound like the early Christians were ancient ignorant people who really believed heaven was, you know, “the heavens” in the sky. But we know, and Christians throughout all time have known, that that’s not true. Heaven’s not a real place. Jesus wasn’t a God. Jesus didn’t fly there. Jesus was a metaphor for God, like a lot of people are.

This has to be what we assume Christians believe–ignoring the few small handful who don’t get theology. Because it’s crucial we as atheists be charitable and not pick on silly versions of Christian beliefs. And if you say Jesus was God you’re saying God, the Ground of all Being, could have been a temporal and corporeal being. And that’s just philosophical hogwash as any philosopher would tell you. So it must not be what Christians really believe. It must be an anthropomorphism that Christians grew out of centuries ago. A childish thing they’ve put away. Let’s attack what Christians really think. God is not a human with a beard who lived 2,000 years ago. He didn’t have a fleshy body that could be crucified. He’s an amorphous ineffable metaphysical abstraction called the Ground of all Being or Being Itself, as Christians really think.

And again, this all makes it triply silly when we atheists ask Christians why if prayer works praying can make no empirically observable difference in the world. Christians know Jesus wasn’t God. They know God itself is just the Ground of all Being. And so they know that when Jesus said, “Whatever you ask in My name, that will I do, so that the Father may be glorified in the Son. If you ask Me anything in My name, I will do it” what he meant was “Talk about the things you want to the Ground of all Being, pretending it is a person like you and will grant your wishes. Then those times when coincidentally what you wanted to happen happens say it was an answered prayer. But when what you pretended to ask for doesn’t happen or when atheists ask why prayers show no discernible effects say, ‘I’m just trying to be close to the Ground of all Being, you philistine atheist nincompoop.'”

And we atheists keep falling for it! We’ve got egg all over our faces!!

So, atheists, it’s time to be charitable. Stop making a straw man of Christians. They know God is not an old bearded man who lives in the sky. That would be ridiculous. Nor could he be a 2,000 year old man who lived on earth and promised that he could, without qualification, fulfill every request made in his name. Nor did that “godman” (a philosophically contradictory concept) die, rise from the dead, or (most laughably of all) fly up to a “real place” in the sky called “heaven”.

It’s time to up our game. It’s time to acknowledge Christians only really believe in the ineffable, inconceivable ground of all being, being itself, that never intervenes in history, does not “literally” care about them like a “father” but just is “the source which emanates their being” and never answers their prayers. And when they say they’re “going to heaven” that’s not a place with things and people from their lives and endless joy. That’s “being with the ground of all being”. Whatever that is.

May 10, 2014
Empowerment Ethics: “How Can We Find External Criteria To Assess Morality’s Truth and Authority?”
Next Post 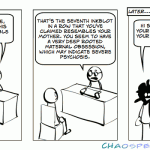 Nonreligious
Why a secular safe space is still important...
Camels With Hammers