The following originally appeared on Secularite as part of my “Empowerment Ethics” series, which now appears on Camels With Hammers.

In my last two posts, I have talked about various things people mean when they say morality is subjective. There are more meanings to cover, but for now I would like to address an interrelated problem that is often confused for the issue of subjectivity, and that’s the relativity of morality. In what ways is morality relative or not relative, and what are the implications of recognizing morality’s relative degree of relativity?

There are a number of meanings of relativity that get confused.

Sometimes what people are saying when they say that morality is relative is actually compatible with a view that morality is rationally and objectively discussable. If we affirm that moralities are justified ultimately by how they conduce to the objective thriving of humans (or “persons” or “sentient beings”, or something similar), then at any number of points, moralities may have to take into account the varying preconditions of thriving for different individual or collective groups of morally relevant agents or recipients of actions. So, if a certain person or group (A) will thrive more if treated in one way (or permitted to act in one way) and if another person or group (B) will thrive if treated in the exact opposite way or allowed to act in the exact opposite way, then there would be a moral reason in favor of treating A and B oppositely or allowing them opposite permissions and prohibitions (assuming there were no other morally mitigating reasons that overrode these factors).

Also, to an extent, morality may be seen as not just dealing with thriving in objective terms but as being about increasing subjective fulfillments where these do not conflict with other more important goods. If we take it that, all things being equal, states of greater subjective of psychological fulfillment are better than states of lesser fulfillment, and if we recognize that subjective preferences vary idiosyncratically in some ways that really admit no judgments of better or worse, then we can allow that it is better sometimes to treat one person (or set of people) in one way that will increase their actual fulfillment and another person (or set of people) in an exact opposite way that will increase their satisfaction, assuming all other moral considerations are equal.

We can have rational arguments that go somewhere, that involve evidence, logical consistency and coherency, and figure out objectively better means of creating a particular being or group’s greater overall thriving or subjective states of subjective fulfillment. (A harder question is whether we can make an objective, rational choice between greater thriving or greater subjective fulfillment when these goods are competing. Or even if we can make a choice between greater subjective fulfillment and possibly competing other kinds of desired subjective states like subjective contentment, feelings of ecstasy, the emotionally rich experience of feeling a range of things including sometimes pain, etc. Or there may be dilemmas about how to choose among competing objective ways to thrive when not all can be feasibly chosen given limitations of time and resources. In future posts, I will argue there are ways to settle such competing aims questions more or less rationally. For now, it is sufficient just to posit that there are at least these multiple objective thriving and subjective experience goods and that morality has something to do with both of them and can be relatively justified at least by aiming at one of them while not harming the others overall, without overriding and compensating justification.)

The relativist objections to morality could take a couple of forms. Some people, I think overly simplistically, think that morality must be absolutist in character; that it mustinvolve prescriptions that apply to everyone the same and so the slightest acknowledgment of the need for situationalist judgment or consideration of the varying routes that exist to different people’s thrivings and desirable subjectives states are the death knell to all objectivity and rationality in morality. This is foolish. It’s based on a bad conception of morality that makes it impossible to defend by defining it in the least practicable way. In actual practice moralities are flexible and situationally sensitive in many cases and from a normative standpoint they should be. We can use objective considerations of the objective means to individuals’ thrivings and subjective fulfillments as guides to shaping our moralities. This is a rational endeavor. Saying that one drop of situationalist, contextualist relativity or one bit of reference to the different subjective states of mind of different people that vary their needs and wants invalidates all moral reasoning as fundamentally irrational and incapable of objective discussion is unjustifiable absolutism. We can have rational discussions that are relative to contexts and use rational means of taking into account those contexts.

In fact, most scientific reasoning takes this form. Determining an objective fact like my weight involves knowing the relation between my mass and the earth’s mass and the gravitational relationship between the two. It’s a “relative” fact in the sense of being contextually determined. And depending on the frame we use it can be seen differently. Were I in an elevator and the cable snapped, and the elevator went into freefall, then relative to the elevator frame I’d be weightless, even though relative to the Earth frame I’d have the same weight and someone on the ground would say it’s my weight that’s accelerating me. (I thank Adam Freese for writing this example for me.) Talking about “weight” is not irrational just because it involves employing frames of reference in order to be meaningful and can be seen differently with different frames of reference. So long as there are deeper rational consistencies underlying the various frames cohesively, what is specified with each frame can be called “objectively” or “rationally” true, even though it involves some context-relativity in specifying its truth.

So long as thriving and/or having enriched subjective states of mind (however these are ranked or defined) are basically good for organisms and so long as empirical, logical, theoretical, and other valid reasoning processes can be adduced to determine and promote what maximizes them (and to determine and combat what minimizes them), then the presence of relativizing factors does not defeat the idea of rationally or objectively better and worse moralities.

In light of this, we can allow that sometimes differing individuals’ moral codes or, even, whole cultures’ or eras’ differences in moral codes can each be relatively good relative to their own conditions of thriving or psychological enrichment, even when they are substantively opposite to each other in terms of their explicit commands, practices, attitudes, etc. Also we can still have rational bases to sometimes critique other people or cultures according to how demonstrably their moral views and practices actually lead to their own maximal thriving or psychological enrichment or in fact undermine it, in spite of all their psychological attachment to their current morality. We can also concede that certain people’s or culture’s codes may make them thrive or subjectively pleased while arguing they only do so in ways that are deeply inconsistent with the maximal overall thriving and the psychological flourishing of the greatest number and, so, in the greater picture are less rational and more in need of change.

Even purely on the level of subjectivity, people do not always know what they really want. Peter Railton talks about “objectified subjective interests”. If I want a particular drink because I am ill and want to feel better, but it will not make me feel better whereas a different drink will (or it won’t make me feel as better as the other drink will) then it is fair to say that what I really want is different than what I think I want. If I psychologically I have thoughts of wanting x because I believe it is the means of securing y, then I don’t really want x but whatever it is that brings about my having y. If that’s in fact z, then my desire for x would be a desire for z were only I informed. In that way z is my real desire. If anyone does ultimately desire the maximal thriving consistent with maximal psychological fulfillment in some way, then in any number of cases they might be said to actually want the opposite of what they think they want and actively have feelings of longing for. Of course, we must be careful here, as many an authoritarian has presumptuously, self-servingly, and/or non-empirically decided they know others’ real goods better than they themselves do. This truth is a temptation to an overestimation of our abilities to second guess other people’s real desires or needs according to our own. But, it is still true that people’s perceptions of the actual means to fulfilling their own desires is far from infallible, and there can be more rational, more empirical, more logically provable means of correcting people’s misperceptions with a higher degree of objectivity and justification, if we are actually rationally scrupulous.

There are more twists to relativist and subjectivist objections to moral rationality and objectivity. I will deal with more of them in future posts.

Not satisfied with some aspect of my moral philosophy yet? Click the question or challenge that is closest to yours:

What is Empowerment Ethics?
Who Is Anyone To Tell Others What To Do?
How Can We Find External Criteria To Assess Morality’s Truth and Authority?
Is Empowerment Ethics Atheistic?
Can Morality Mean Something Other Than Absolutist Morality?
Is Morality Just Subjective?
Are Individuals’ Moralities Merely Personal?
Is Morality Relative?
Does Everyone Mean Something Different By The Word ‘Good’?
Are Moral Issues Too Subjective To Argue Over?
Can Atheists Condemn Rape Without Theistic Moral Absolutism?
Is Morality Just Culturally Relative?

I am a philosopher who specializes in ethics. For years, starting in my doctoral dissertation and then continuing right here on Camels With Hammers, I have been drafting, defending, and developing my own spin on the perfectionist and humanist ethical traditions that I call “Empowerment Ethics”. I write about everything from the most abstract foundational issues related to the nature of value and morality themselves (what philosophers call “metaethics”), to the most pressing moral controversies of our time, to how to live a good life in practical terms. The post above was an entry in this larger series. For a regularly updated full list of posts in this series and a very brief, 5 paragraph long, primer on what “Empowerment Ethics” is about as a moral philosophy see and bookmark this permanent page. A more thorough overview of the views can be found in my post My Systematic, Naturalistic Empowerment Ethics, With Applications To Tyrants, the Differently Abled, and LGBT People. 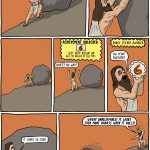 Deconversion: Brett McCracken Gets It Completely...
Roll to Disbelieve
Related posts from Camels With Hammers