The Deep Web and the Dark Web

NPR has a great feature on the so-called “hidden internet” where everyone from drug dealers, arms dealers, human rights activists, domestic violence victims, law enforcement, the US Navy, and many others operate anonymously. You can listen to it here and/or read the transcript.

Being completely clueless about this stuff aside from some vague ideas and a viewing of House of Cards’ second season this whole segment was fascinating and eye opening. Most surprising to me (though it should not have been, upon reflection) was the origin of the deep web:

Like the Internet itself, Tor was created by the government. Developed at the U.S. Naval Research Laboratory, its initial purpose was to protect the communications of the U.S. military, Sandvik says.

“But the challenge here is that if you have this anonymity system and [all] traffic going into the system is the U.S. Navy and everything popping out is the U.S. Navy, then you’re not that anonymous,” she says. “So by opening up this system to everyone, different groups of people can hide in a big crowd of anonymous Tor users.”

Sandvik says because of how Tor was developed, emphasizing privacy by design, there is no way to figure out who’s using Tor or if those users are using it for illicit activities.

Learn much more about how to get to the deep web and what awaits you there.

Your Knowledge of the Deep Web?

May 26, 2014
Honest Trailers: Star Wars Episode II: Attack of the Clones
Next Post 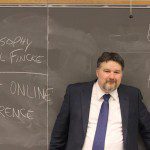 Nonreligious
It's All A Lie.
Camels With Hammers

Nonreligious
Join The Campaign Against #TwitterTheocracy Today
Camels With Hammers

Nonreligious
Use Facebook To Pinpoint When Your Life Fell...
Camels With Hammers