Join The Campaign Against #TwitterTheocracy Today 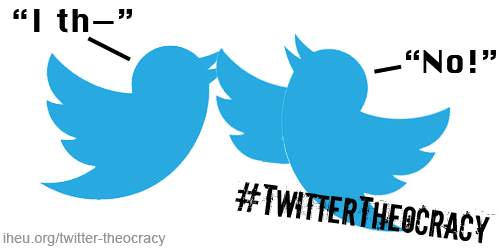 The Ex-Muslims of North America are trying to harness the power of hashtags to draw attention to an important betrayal of the rights of conscience by a government and a complicit social media giant:

Campaign against #TwitterTheocracy on June 10th 2014

Twitter has agreed to use its ‘Country Withheld Tool’ to block “blasphemous tweets” in Pakistan, thus becoming complicit in suppressing free speech, and in aiding Pakistan’s blasphemy laws.

Over the past month, Twitter accounts have been suspended and tweets have been blocked in Pakistan; a Twitter user has recently been jailed in Turkey for a “blasphemous” tweet. In Pakistan and other theocracy-based states, blasphemy laws are key tools used by those in power to actively persecute minorities. We urge Twitter and all other international companies and organizations to uphold human rights-based standards of conduct, particularly when it comes to freedom of expression.

We at Ex-Muslims of North America (EXMNA) are committed to the United Nations’ Universal Declaration of Human Rights Article 19, pertaining to freedom of expression. Alongside AA, AAI, AHA, Black Non-Believers, Camp Quest, CFI, RDFRS, SCA, SHJ, SSA and other secular allies, we are organizing a day of protest on June 10th to highlight the role Twitter is playing in aiding and promoting anti-freedom, anti-human-rights, theocratic policies.

On June 10th, tweet hashtag #TwitterTheocracy and speak up about how Twitter has chosen to side with theocratic regimes instead of those who are trying to resist those regimes.

There was a time when Twitter was rightly lauded for the role it played during the Arab Spring, facilitating communication between those resisting oppressive governments. In fact, Egypt’s dictators tried to disable Twitter, and then internet access completely, before being overwhelmed by the protests that began at Tahrir Square. Governments in Tunisia and Iran tried similar tactics to suppress protests against those oppressive regimes.

Lately, Twitter seems to have moved away from its ethical, pro-human-rights stance, and caved to the demands of oppressive governments. By using its ‘Country Withheld Tool’ to enable government authorities to censor content, Twitter is aiding the enforcement of laws that violate both the UN declaration as well as the secular values of the separation of church/mosque and state.

We at EXMNA, and our secular allies, understand the complicated position in which Twitter and other international companies and organizations find themselves when operating in countries with oppressive regimes. However, Twitter users, secularists, and those who care about human rights expect Twitter to be better than oppressive, theocratic regimes. Twitter was forged on the principles of open communication. Now, it has compromised the principles of freedom of expression in selected regions of the world. We must stand against this selective hypocrisy.

We urge you to use your freedom of expression, and tweet using the hashtag #TwitterTheocracy on June 10th, 2014. Along with tweeting the hashtag, we ask that you sign our petition, to call out Twitter’s complicity in censoring dissenters and aiding the theocratic agenda in Pakistan and elsewhere. If you care about freedom of expression and human rights, please speak up, join this campaign, and share this page with your friends and social networks.

This campaign is by

Twitter shouldn’t be an arm of theocracy used to punish “blasphemers”. Speak out against #TwitterTheocracy. Read the #TwitterTheocracy tweets already being posted and join in. Please participate any way that you can. For my detailed defense of blasphemy rights, including my attempts to reconcile them with my stances in favor of civility in disagreements, please read My Thoughts on Blasphemy Day since 2009. 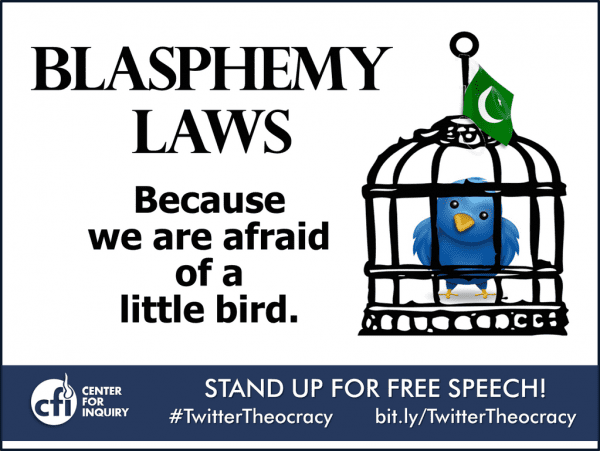 June 10, 2014 Dear Mr. Ambassador, Representative of Pakistan (Re: #TwitterTheocracy)
Recent Comments
0 | Leave a Comment
Browse Our Archives
get the latest from
Nonreligious
Sign up for our newsletter
POPULAR AT PATHEOS Nonreligious
1

Nonreligious
What Kind of Minority is an Ex-Muslim?
Camels With Hammers