One Atheist’s View of Christmas

This is a post by guest contributor Martin Hughes.

First, let me say that I don’t really mind calling December 25th “Christmas.”  This is in spite of the fact that, historically speaking, December 25th was once called “Dies Natalis Solos Invicti,” which was basically a holiday in the name of the Roman sun god Sol Invictus that marked the winter solstice, and that December 17-25th was a Roman holiday called “Saturnalia.”  Ok, fine; I’ll still admit that, for around 1600 years, a substantial number of people have been calling it “Christmas” (with various degrees of prominence).  I still think the name “Dies Natalis Solos Invicti” is a bit charming, I’m intrigued by descriptions of “Saturnalia,” and I like the idea of celebrating the beginning of winter, but really — it’s no big deal.  I’m an atheist, but I get that the holiday is usually called “Christmas” in this country.  Alright.  It’s just a word.

The attitude many Christians exhibit around Christmastime, though, is somewhat confusing to me.

Here’s the thing:  Most Christians claim they believe Jesus is the Son of God.  That’s a big deal for me, as I looking in as an atheist.  I know enough about how immensely huge the universe is to know that God, if He ever existed, would be a really, really, really powerful being.  I’d be a peon.  A nobody.  Not even deserving to be called a “threat,” really.  Like, really, compared to this God, I’d be really, really, really small.

This God, as Christians seem to portray Him, seems to be someone who could defend Himself, right?  He doesn’t seem to need help, does He?  I mean, He’s God.  The thought that God would be remotely diminished by someone saying “Happy Holidays” instead of “Merry Christmas,” or by a nativity scene being taken off the courthouse lawn — to me as an atheist, it seems almost comically ludicrous.

I know that might be an offensive position to take regarding the yearly “War on Christmas” drama, but it’s honestly how I look at it.

Now, moving on…I don’t believe in God, so if you do — I disagree with you, but fine.  You can have your religious traditions without my loud disapproval.

But when a Christian insists that I pay homage myself to those religious traditions, or fights hard for them to prominently influence the public sphere, I become concerned.  No, it’s not because I’m offended that Christians are protecting a God I don’t believe in.  It’s that I know that God, if He is really who Christians say He is, doesn’t need protecting: God would great enough to protect Himself.  So this clamoring doesn’t seem to be for God, who, I believe, doesn’t exist; it seems to be for people, who do exist.

In other words…the louder a Christian is concerning the “true meaning” of “CHRISTmas,” the more I take the less charitable of two different views regarding how I see the Christian’s belief in God.

One of these views is that a Christian believes in God because they think God is real. If God is real, then, He doesn’t need protecting.  So the more people strive to protect Him as if He’ll be hurt if they don’t, the less I tend to think they believe in Him because He’s real.

A second view is that a Christian wants psychological comfort and/or political/social influence, and that the desire exhibits itself in a belief in God — a belief that must be protected at all costs.  So the protection of “God” isn’t really there to defend a real, living God here.  The protection would be about a Christian defending their own psychological comfort, realm of influence, and desires.

Thus, I tend towards the second view when Christians strive to belligerently defend God’s prominence in the public square regarding Christmas; the insistence seems a way to defend their own interests, and not so much the interests of the God they claim to believe in.

One might try to say that the insistence on “Christ” is about convincing people to be Christian, except for the fact that calling the holiday “Christmas” has no rational value.  It’s not something I didn’t know before that’s suddenly going to convert me into a Christian.  It has no value in proving who Jesus was (or wasn’t), or if the Bible is true, or any Christian creed whatsoever.

So, again, the emphasis on “Christmas” being called and treated as if it is “CHRISTmas” in the public square doesn’t seem to be about convincing atheists or protecting God.  It seems to be about personal power, control, and shielded insecurities.

So when it comes to that, I fight back.  I feel a bit obligated to.  As an atheist, I don’t want people to be prejudiced against me when I join the public sphere.  I don’t want religious attitudes to be forced in the public arenas that control my day to day life, which is why I have a (hopefully understandable) aversion to, say, nativity scenes on courthouse lawns.  Frankly, when this happens it basically seems as if the Christian is saying, “our justice system favors Christianity and is biased against other groups.” 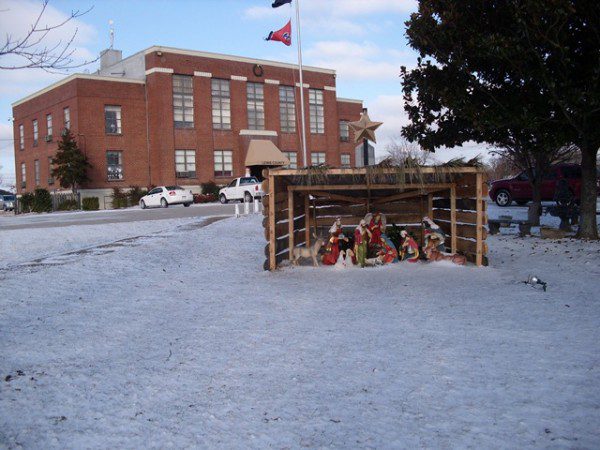 On a more personal, practical level: When people say “Merry Christmas” I really don’t mind.  But when people say “Merry CHRISTmas!” with emphasis and the knowledge that I am an atheist, I get the sense that they are trying to judge me and force their ideals on me because of the name of a holiday, and it seems ridiculous.

And regarding attitudes towards the way I, personally, choose to celebrate (or not celebrate) the holiday: When someone implies, with an emphasis that “Jesus is THE reason for the season” or something like that, that I can only celebrate Christmas by celebrating Jesus, I see that not as protecting Jesus (who, again, doesn’t need protecting), but as them trying to control what I do and don’t do on December 25th.  To be more specific — if you make it clear that you’re looking down on me because I have, say, a Winter Solstice party instead of a Christmas party, that’s not helping God at all, and it’s not converting me to Christianity.  It’s basically making you look like a jerk.  If you insist on making Christianity prominent in public places to emphasize that “Christmas is about Christ,” you don’t seem to be helping Christ (even if He did exist) — you seem to be helping yourself.

So, all that’s to say that this “War” that happens whenever Christmas comes around here in the United States doesn’t have to happen again.  Christians, this is fairly simple for you — just celebrate how you see fit; God, if He exists, should be able to defend Himself in the public square, right?  And ask yourself — is my insistence on “Merry CHRISTmas” really about defending an all powerful God?  Or is it about defending myself?

Of course, there’s nothing wrong with defending yourself, so long as you do so with honest, empathetic, rationally consistent motives.  Personally, I think an honest view of our desires and attitudes can move us forward more productively than faith in a God who doesn’t exist. I just don’t think it’s healthy for culture or for individuals to use God as a cloak for power and control that unnecessarily marginalizes some awesome people.  Hopefully that makes sense.

This was a guest post by Martin Hughes. Unless otherwise noted, Camels With Hammers guest posts are not subject to editing for either content or style beyond minor corrections, so guest contributors speak for themselves and not for me (Daniel Fincke). To be considered at all, posts must conform to The Camels With Hammers Civility Pledge and I must see enough intellectual merit in their opinions to choose to publish them, but no further endorsement is implied. If you would like to submit an article for consideration because you think it would be in keeping with the interests or general philosophy of this blog, please write me at camelswithhammers@gmail.com.

December 11, 2014
Why is Eric Garner's Unjust Death the Black American's Problem?
Next Post