Depression: Pedaling With The Brakes On

Depression: Pedaling With The Brakes On September 24, 2015 Daniel Fincke 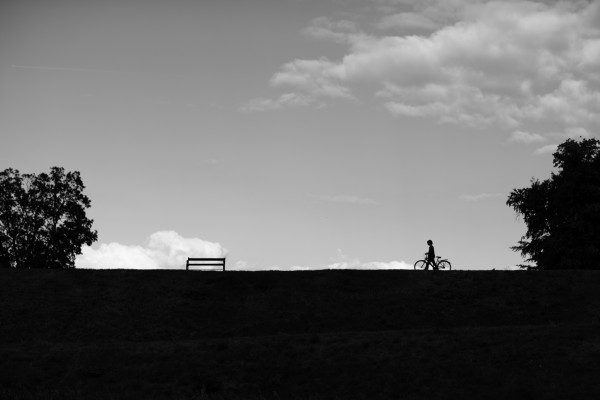 I learned to ride a bike when I was a child, but didn’t have much opportunity to practice during my teen years. So the next time I had the chance to go on a ride, at eighteen years old with a small group of people, I was nervous about starting again. I also didn’t have a very clear frame of reference about how easy or how hard it should be.

So I borrowed a bike. I took some time to adjust the saddle and then my group left. After a few seconds, they turned back, realizing I was lagging behind. They asked if anything was wrong. I said that it was just hard to go very fast. They laughed and said it wasn’t that hard. It’s just riding a bike and you never really forget how. And so I tried my very best to keep up. At the halfway point we all stopped to do some birdwatching. I said I was tired and not sure if I could keep going. They told me to stop whining and enjoy the ride. Wasn’t it a beautiful day? Then they suggested that perhaps I really needed to get some more exercise. I didn’t think I was less fit than the others in the group. Sure, I didn’t exercise much, but as far as I knew they didn’t either and yet none of them were struggling. So I pressed on. Not only was I the last one in the group to arrive, but when I did, I was huffing and puffing and my face was red. I complained again. So someone checked my bike out. One of the brakes was broken and basically on all the time, for the entire ride. Just looking at me, people assumed I was riding a perfectly functional bike and that something must be terribly wrong with me for being so slow, so exhausted, on such a simple bike trail.

September 13, 2015
In Which I Vent About Kim Davis (and Announce My New Philosophy Class Times)
Next Post

The Two Factions Forming in the...
Roll to Disbelieve
Related posts from Camels With Hammers

Nonreligious
What to Make of our Natural Dispositions to...
Camels With Hammers

Nonreligious
Mutual Kindness As The Key To A Successful...
Camels With Hammers

Nonreligious
The Smarter You Are, The More Trusting You...
Camels With Hammers
TRENDING AT PATHEOS Nonreligious