How The Force Awakens Disappointed Me (Spoilers Galore)

Lex and I got to see The Force Awakens tonight because it premiered in France today. I was going to first write a spoiler-free review but I was so hyped up with my frustrations that I wanted to vent them up front and I can’t really explain what’s wrong with the movie without talking about it in detail. So this video is my fresh out of the theater ranting with Lex response to the things that the movie did, and didn’t, do that I found really off-putting. So it’s as blunt with spoilers of the movie as you would find in any rant from someone who just saw the movie with you.

Come discuss this post with Lex and me and the movie, or Star Wars in general, with us by joining the Camels With Hammers closed Facebook group for people who have seen the movie or don’t mind learning spoilers.

If you’re rather read than watch, my full list of Star Wars analysis is here:

The Force Awakens is a Lazy Cop-Out (Spoiler-Free Review)

Why Anakin’s Turn To The Dark Side Made Sense 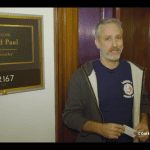 December 16, 2015 The Force Awakens Is A Lazy Cop Out (Spoiler-Free Review)
Browse Our Archives
get the latest from
Nonreligious
Sign up for our newsletter
POPULAR AT PATHEOS Nonreligious
1

Semantic Paraphasia: The Things We Can't Help (LSP...
I often mis-say specific words. I know the word I want and...
view all Nonreligious blogs
Copyright 2008-2021, Patheos. All rights reserved.