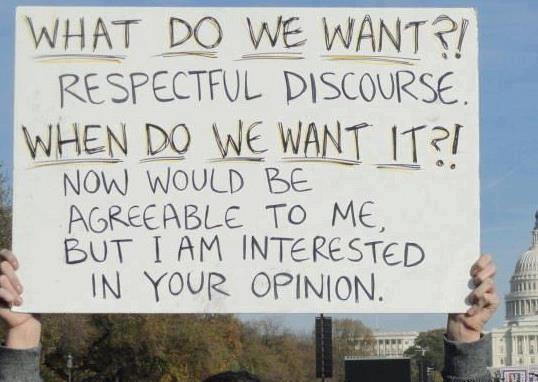 I am convinced that civil behavior in arguments is a moral necessity in most cases. I hold myself to this civility pledge that I published in February. I hope and expect that my readers will do their best to live up to its ideals as well. Here are my moderating procedures. Below find links to numerous posts on the ethics and practice of civility, many of which address common objections to my views. I have included at the bottom numerous links on better arguing from Chana Messinger’s blog The Merely Real.

I Am Not Against Emotions. I Am Against Insulting Epithets.

“But People Aren’t Logical Robots, We Need To Shock Them, and They’ll Call Us Uncivil Even If We Are Civil”

No, You Can’t Call People Sluts.

“But Aren’t Some People Actually Stupid?”

I am not against “dirty words”. I am against degrading words that have malicious intent and functions built into them.

Elitism, Incivility, and the Word Stupid

You Don’t Kill Hateful Words’ Powers By Ignoring Them

Do Marginalized People Need To Be Insulting To Be Empowered

What Kind of a Rationalist Wants to Verbally Abuse People into Submission Like an Authoritarian?

Intent Is Not Magic. But It Still Matters.

Why I Usually Don’t Blog About Interpersonal Conflicts

We Need Both Safe Spaces AND Philosophically Open Ones

Debate is Not Pointless

Feminism, Civility, and Ron Lindsay’s Welcome To Women in Secularism

The Truth, The Whole Truth, And Nothing But The Truth–But With No Name-Calling

Who Are You Calling Stupid?

I Don’t Really Give A Fuck About Tone, Per Se

I Am A Rationalist, Not A Tribalist

Can You Really Love Religious People If You Hate Their Religiosity?

My Thoughts on Blasphemy Day

Moral Offense is Not Morally Neutral

In Defense of Taking Offense

The Ethics of Challenging Each Other’s Identities

“How Is It Fair To Question Other People’s Identity-Forming Beliefs While Demanding Respect For One’s Own Belief-Formed Identities?”

Bullying or Debating? Religious Privilege or Freedom of Speech?

Lord Cthulhu Comes to Camels With Hammers: An Interview with PZ Myers

Making My Comments Rules Explicit: “Don’t Bully People With Insulting Names” and “Make Personal Charges Against Others Only In Egregious Cases”

How I Friend, Unfriend, Block, and Enforce Civility on Facebook

An Example of Steelmanning: The Issue of Gay Marriage and Polygamy by Chana Messinger

Being Charitable by Chana Messinger

When I Say Charity, I Really Mean Due Diligence by Chana Messinger

When to Consider Reconsidering Your Position by Chana Messinger

Don’t Make it About Identity by Chana Messinger

All-or-nothing is All Wrong by Chana Messinger

The Privilege of Charity Part 1 by Chana Messinger