”Did God Have a Wife?”: Asherah, Heavenly Mother, & Mother Earth

In the theologically conservative Protestant Christianity of my childhood, the sacred was always imagined as masculine: God the Father Almighty, Lord Jesus Christ the son, both of whom were represented on Earth by an all-male clergy. As I grew older and learned more about other Christian traditions such as Roman Catholicism, I was fascinated by their devotion to Mary, the mother of Jesus as also the mother of God, given their belief in the divinity of Jesus. And although she was, in some senses, a feminine image of the divine, there remained the issue of her supposedly perpetual virginity: seemingly women could only be sacred images if they were sexless.

What a set-up for unnatural gender dynamics! A single father (who is divine) has an encounter with a human woman, who remains a virgin. But together they have a son, who is said to be fully human and fully divine. And that son, whom tradition calls us to imitate,  remained celibate his entire life. Not exactly a model for so-called “traditional family values.” I remain convinced that anyone who thinks that there is a simple biblical vision of “one man, one woman, and 2.5 children” for family values has read the Bible only through a highly selective lens.

For now, allow me to share just one of the many surprising discoveries I found, when I began studying the Bible closely for myself. While reading through 1 and 2 Kings, I noticed six different passages that referred to “Asherah,” a name that was previously unfamiliar to me:

It turns out that Asherah is an ancient Canaanite Mother Goddess, “who was associated with living trees and hilltop forest sanctuaries, and who could sometimes be symbolized by a wood pole or an image of a tree” (Dever 100 – 102).

In the congregation of my childhood, I remember learning about the contest in 1 Kings, which sets the 450 prophets of Ba’al and the 400 prophets of Asherah against the prophet Elijah. As the story goes, Elijah succeeds in persuading his god Yahweh to miraculously light a stack of wood that has been soaked with water, which according to the Bible proves that Yahweh is a true god. But the prophets of Ba’al and Asherah are unable to light their fire, which according to the Bible exposes Ba’al and Asherah as false gods. The reason I remember this story is the slightly traumatizing scene in verse 40, where Elijah commands that all 450 prophets of Ba’al be captured and killed. And although I heard that story many times, what I never noticed prior to paying attention to Asherah references is that it is only the prophets of Ba’al are killed. Reading between the lines, the prophets of Asherah “were probably spared [because] her cult was widely tolerated, despite the misgivings of some purists” (211).

Taking into account the Hebrew Bible, along with many  archeological discoveries related to Asherah, and references to her in other Ancient Near Eastern literature, it appears that Asherah was the “principal female deity of the pantheon in Canaan in pre-Israelite times” and “the consort of the chief male deity El” (210). That Canaanite deity name “El” continued to show up in many places, including names like Israel (“one who wrestles with God”), Samuel (“Name of God”), Emmanuel (“God with us”).

Now, there is a much more detailed story to be told here that involves how four major sources — nicknamed in modern times J, E, P, and D — were edited together into what we know today as the first five books of the Bible (Genesis, Exodus, Levitcus, Numbers, and Deuteronomy). But suffice it to say that in one of those sources (known as the “J-Source”), God is consistently referred to as Yahweh Elohim, which is usually translated into English as “LORD God.” And from the very beginning of the J-Source in Genesis 2, God is consistently called Yahweh Elohim. But in the E-Source, God is exclusively called Elohim (rendered in English as “Lord”) until Exodus 3, when, according to the E-Source, there is a surprising — and seemingly first-time-ever — revelation to Moses that God’s real name is “Yahweh.” But that alleged secret would be a surprise to the community who wrote the J-Source, who knew “Yahweh” was God’s name from way back in the Garden of Eden.

Over time, Yahweh, who was originally one among many tribal gods, rises in popularity (especially among the 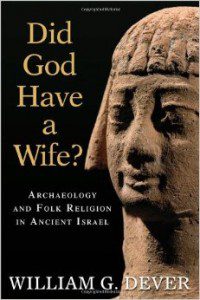 literary elite) such that eventually his identity merges with El, the chief male deity of the Cannannite pantheon. But even with Yahweh’s ascent among the elite individuals responsible for the writing and editing of the Hebrew Bible, that text retains trace evidence of the popular devotion among the Israelite people to the ancient Canaanite Mother Goddess, Asherah. If you are interested in going into more depth, an accessible introduction is Did God Have a Wife? Archaeology and Folk Religion in Ancient Israel by the renowned biblical archaeologist William Dever.

Dever does an excellent job at emphasizing the difference between the after-the-fact, highly selective, idealistic version of Israel’s history that is written down by the literary and priestly elites into the final version of the Hebrew Bible that we have inherited — contrasted with the much messier and more diverse reality on the ground of how religion was actually practiced by most common folk, which included devotion to the goddess Asherah (69-72).

To give three more brief examples of how the Hebrew Bible testifies to the polytheism of many common people prior to the Babylonian exile in 587 B.C.E., Exodus 20:3 has God telling the Israelites, newly freed from slavery in Egypt, “you shall have no other gods before me.” There is not a denial that other gods exist, merely a prohibition from putting them as more important than Yahweh. Similarly, Deuteronomy 32:8-9 says, “8 When the Most High apportioned the nations, when he divided humankind, he fixed the boundaries of the peoples according to the number of the gods; 9 the Lord’s own portion was his people, Jacob his allotted share.” Again, the existence of other gods is clear. Likewise, in Joshua 24:15, Joshua says to the Israelites, “choose this day whom you will serve, whether the gods your ancestors served in the region beyond the River or the gods of the Amorites in whose land you are living; but as for me and my household, we will serve the Lord.”

In considering the consequence of this move from a polytheism that included both male gods and female goddesses to a monotheism that says there is only one true God, who is gendered male, a good general rule-of-thumb in religious studies is that a religion has crossed into a dangerous patriarchal fundamentalism when the Sacred Masculine archetype of Father Sky devolves into a literal Sky Father: worship of a Zeus-like male human figure, who is imagined to actually live in the sky and sit in judgment of humanity.

The archetype of Father Sky is about the sacred practice of looking up in awe and wonder at the beauty of the cosmos, which is meant to balance the Sacred Feminine metaphor of Mother Earth. But whenever a literal “Sky Father” theology reigns, men are literally the beneficiaries. And don’t be fooled by the propaganda that, “We cloister our women at home, forbid them from driving cars, and keep their bodies covered because we respect them so much, want to protect them, and put them up on a pedestal.” As the late feminist theologian Mary Daly often said, “Where God is male, male is God.”

Or to consider the parallel of my favorite underreported belief from Mormon theology, according to the official doctrine of the Church of Jesus Christ of Latter Day Saints, God (“Heavenly Father”) is married. And my hope is that “Heavenly Mother” will continue to embolden feminists in Mormonism. Indeed, back in 1977, during the Mormon General Conference, an organization called Mormons for the Equal Rights Amendment hired a plane to fly a banner over the Salt Lake City LDS Tabernacle that said, “Mother in Heaven Supports the ERA” (Bowman, The Mormon People, 234ff).

So, in the spirit of Asherah, Heavenly Mother, and Mother Earth, I will end with a challenge — a vision, really — from the feminist philosopher of religion Grace Jantzen — words that feel particularly resonant in this holiday season, when a domestic terrorist attack was committed against a Planned Parenthood facility two days before the first Sunday of Advent, which in the Christian tradition is the four-week season leading up to the Feast of Christmas. Jantzen writes that:

a traditional philosophy of religion (and western culture generally) is preoccupied with violence, sacrifice, and death, and built upon mortality not only as a human fact but as a fundamental philosophical category. But what if we were to begin with birth, and with the hope and possibility and wonder implicit in it? How if we were to treat natality and the emergence of this life and this world with the same philosophical seriousness and respect which had traditionally been paid to mortality and the striving for other worlds? ….  Such a feminist approach is philosophically viable, and opens up new ways of considering religion, human flourishing, identity, and difference, and ecological concern. (1999:2)

Let us answer “yes” to all the hopes, possibilities and wonder of this life and this world that we have here and now with one another.

December 21, 2015 Why You Should See 2,700 (Not 12) Stars at Night: Reclaiming a Spirituality of Dark Skies
Recent Comments
0 | Leave a Comment
Browse Our Archives
get the latest from
Carl Gregg
Sign up for our newsletter
POPULAR AT PATHEOS More Voices
1 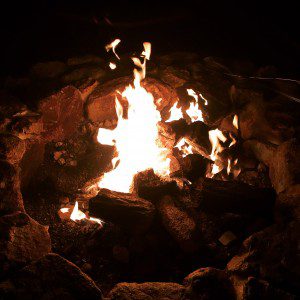