I have posted previously about my interest in pragmatic approaches to meditation. Such approaches seek to balance the best of traditional Buddhism with all that we know here in the early twenty-first century. One significant figure in this movement (broadly speaking) is Chögyam Trungpa, who died in 1987 at the far too young age of 48 from health complications followings a heart attack. You’ll sometimes hear a title added at the end of his name, Chögyam Trungpa Rinpoche, a Tibetan honorific that means “precious one.”

Today he is remembered as an inspiring, charismatic, and controversial teacher. Drawing from his online biography, he was the “11th descendent in a line of important teachers in one of four main schools of Tibetan Buddhism. And he helped promote a “non-sectarian” approach within the Tibetan tradition, which sought to “bring together and make available all the valuable teachings of the different schools, free of sectarian rivalry.”

In his early years, he received a thorough, traditional monastic education and was named the head of a group of monasteries in Tibet. But a major turning point came in 1959, when he twenty years old. The Chinese Communist party took control of Tibet, and he was forced to flee his native country. Along with a few other monks, he was able to escape over the Himalayas to India. (Tenzin Gyatso, the 14th Dalai Lama, was forced into exile the same year.)

Trungpa moved to England in 1963, where he studied “comparative religion, philosophy, and fine arts at Oxford University.” In 1967, he moved to Scotland and founded the first Tibetan Buddhist practice center in the West. “Shortly thereafter, a variety of experiences—including a car accident that left him partially paralyzed on the left side of his body—led to his decision to give up his monastic vows and work as a lay teacher.” 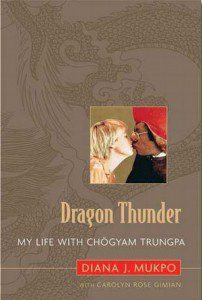 During his lifetime, he published fourteen books. The first of these appeared in 1969, titled Meditation in Action. The next year, 1970, was another major turning point. He got married, moved to the United States, and opened a meditation center in Vermont. Now, it is important to be honest that the person he married was a sixteen-year-old from an upper-class English family who was one of his students. For anyone curious, you can read her perspective in her memoir, Dragon Thunder: My Life with Chögyam Trungpa. Part of what she has said for herself is that:

For him there was a slightly different cultural context, because people in Tibet tended to get married a lot younger than they do in the West. From my perspective, I really was not attached to the conceptual norms I had grown up with; to a certain extent I’d rather radically rejected my culture. I really wasn’t looking at it from the reference point of whether it was appropriate or not. I simply had this unbelievable connection with him that felt to me very natural. I think you can say the proof is in the pudding. I don’t feel I was exploited because this was not a casual encounter. This is something that developed into a deep, meaningful, lifelong relationship.… On the other hand…I’m certainly not saying that I would condone 28-year-olds sleeping with 15-year-olds.

They did stay married, had four sons together, and it was 1970, in the wake of the countercultural movements of the 1960s. But Trungpa also reportedly had sexual relationships with many other students, and seriously abused alcohol over many years (The Other Side of Eden xiv – xv, 31, 34, 40-41, 176).

In the spirit of fairness, it may be important to name that some similar clergy/congregant dynamics were happening in my own tradition of Unitarian Universalism, as well as many other religious movements at that time (including into the present) which parallel abusive guru/student relationships. And while much good has come from the Sexual Revolution of the 1960s, there has also been a shadow side in which sexual freedom created opportunities for abuse. The blasé attitude was often along the lines of, “Stop being so puritanical, it’ll be fine.” In a few cases perhaps it was fine, but in many cases it was not fine. Abuse of power and betrayal of sacred trust caused lasting harm to individuals and religious communities. If you are interested in learning more, I strongly recommend the courageous lecture delivered last year at UU General Assembly by my colleague The Rev. Gail Seavey titled “If Our Secrets Define Us.”

As the UU movement has sought to learn from misconduct in the past, a few years ago the UU Minister’s Association distilled our sexual ethics guidelines to a simple, clear set of twenty-one words: “I will not engage in sexual contact, sexualized behavior, or a sexual relationship with any person I serve as a minister.” If a minister chooses to enter into a relationship with someone for whom they have served as a minister, the ministerial relationship must end. And there are recommended best practices for transparency and accountability to increase the chance of avoiding harm when transitioning to a non-ministerial relationship.

At this point, I have in some ways moved afield from the life and teachings of Chögyam Trungpa, but as I have begun to explore his life and teachings more deeply, I do not know how to talk about him responsibly without addressing the larger context of power dynamics and sexual misconduct that we have greater clarity about today than we did in the 1970s and 1980s—although perhaps lack of clarity was less a factor than a lack of processes for holding abusers accountable, processes much more accessible today in the wake of the Anita Hill hearings and related movements, even as the current system remains far from perfect.

(I will continue tomorrow in a post on “Chögyam Trungpa & the Level/Line Fallacy.”)

June 15, 2017 Chögyam Trungpa & the Level/Line Fallacy
Recent Comments
0 | Leave a Comment
Browse Our Archives
get the latest from
Carl Gregg
Sign up for our newsletter
POPULAR AT PATHEOS More Voices
1