As an undergraduate, I was a double-major in philosophy and religion. In some ways those two fields are similar—both are interested in exploring the big questions:

There are also ways in which the two fields are different — as in the classic formulation, “What has Athens to do with Jerusalem?” Philosophy literally means love (φιλο/philo) of wisdom (σοφία/sophia), and can connote a focus on what we can know based on our human experience—along the lines of the Unitarian Universalist (UU) Fifth Source, “Humanist teachings which counsel us to heed the guidance of reason and the results of science, and warn us against idolatries of the mind and spirit.” In comparison, religion can connote more of an openness to faith, transcendence, and revelation that comes from beyond our limited human perspective—as represented by the UU First Source, “Direct experience of that transcending mystery and wonder, affirmed in all cultures, which moves us to a renewal of the spirit and an openness to the forces which create and uphold life.”

Most of my first two decades of being raised in a theologically conservative congregation in the midlands of South Carolina were like swimming around in a familiar lake. Declaring a double major in Religion and Philosophy was like suddenly finding myself at the edge of the ocean for the first time—simultaneously overwhelming and exhilarating. As I lived into the tension between these twin perspectives, I increasingly sought to bring them into dialogue. I began asking my favorite religion professors about religious responses to twentieth-century philosophy and I began to ask my favorite philosophy professors about how postmodern philosophy might respond to twentieth-century theology. (I graduated college in 2000, so the twenty-first century was still in the future at that point.) 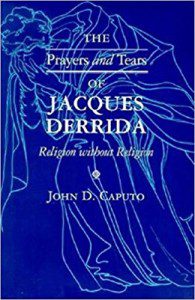 Around that time, I remember noticing a poster on the bulletin board outside the philosophy department about a conference on “The Prayers and Tears of Jacques Derrida: Religion without Religion.” I was intrigued. Derrida (1930-2004), who died a few years later in 2004, was a French postmodern philosopher known for his work on “deconstruction,” which emphasizes gaps in knowledge, the threads we can pull to unravel ideas. And he was famously an atheist. So what was this about his “Prayers and Tears” and his “Religion without Religion”? It turns out that Derrida was Jewish by birth, and surprised both his fans and his critics with a post-structuralist autobiography that played on the life and writings of the fourth-century Christian saint Augustine of Hippo (354-430 C.E.). In so doing, Derrida never stopped being an atheist, but in the spirit of “deconstruction,” he was interested in exploring what he called “repetitions” with a  “différance”: the ways we can start with the material that is around us in the world, and playfully and creatively make new meaning.

I came to learn that the title “The Prayers and Tears of Jacques Derrida” was itself a play on tears (as in crying) and tears (as in pulling apart). And the subtitle “Religion without Religion” was about seeking the original, authentic, true experiences that are often the source of religious movements—but that can become corrupted and institutionalized over time. Derrida’s work is quite difficult to read, but as I researched further, I discovered John Caputo (1940 – ), a much-more-accessible, English-speaking philosopher doing intriguing scholarship in a similar vein.

Now in his late 70s, Caputo has retired from full-time teaching, although as a scholar he does not show signs of slowing down anytime soon. If I were back in graduate school today and could sign-up for a course studying the work of one other contemporary philosopher, from what I can tell, the philosopher currently at the peak of her career who seems to be doing the most interesting, cutting-edge work along these lines is the French philosopher Catherine Malabou (1959-), who is a little less than a generation younger than Caputo.

At this point, I’m likely pushing the limits of the permissible nerd threshold, but thank you for indulging me in giving a shout out to any of my fellow religion and philosophy geeks out there. In tomorrow’s post on “The Religion of the Rose,” I will pivot to using the life and thought of John Caputo as a way of reflecting on what the intersection of postmodern philosophy and religion may have to teach us today as religious and spiritual progressives.

June 8, 2017 The Religion of the Rose
Recent Comments
0 | Leave a Comment
Browse Our Archives
get the latest from
Carl Gregg
Sign up for our newsletter
POPULAR AT PATHEOS More Voices
1