The Revolution in Bioethics is Already Here: from “Gene-editing” to “Genome Engineering”

(This post is a continuation of my topic yesterday on “Bioethics, CRISPR, & “Our Children Redesigned.”) 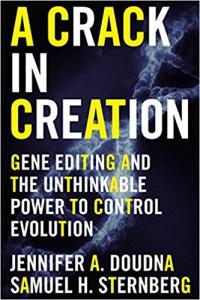 The best metaphor I’ve seen for how CRISPR works—for those of us who don’t have a doctorate in biochemistry—is that CRISPR is kind of like a “designer molecular Swiss army knife” which can “home in on specific twenty-letter DNA sequences and cut apart both strands of the double helix” (101).

The real rub for bioethics arises because CRISPR can alter not only somatic cells (throughout the body of individuals), but also germline cells, whose traits can be inherited by future generations (158). All of a sudden, we humans—ourselves products of the evolutionary process—have the power to micromanage the evolutionary process itself:

These are questions of genetics that do not even touch the coming augmentations that will be possible through artificial intelligence, nanotechnology, and other forms of bioenhancement, all of which I’ll delve into more deeply in a forthcoming post in November, inspired by the book Our Grandchildren Redesigned: Life in the Bioengineered Society of the Near Future.

For now, as some context for how rapidly these changes are happening, let’s turn the clock back almost forty years:

To give you a further example of the power that CRISPR holds, we humans could potentially choose to wield this new technology to either make mosquitos less dangerous or to make the mosquito extinct. Why would we want to do that? It’s not about having a few less annoying misquote bites:

The mosquito [arguably] causes [as much or] more human suffering than any other creature on earth. Mosquito-borne diseases—malaria, dengue virus, West Nile virus, yellow fever virus, Chikungunya virus, Zika virus, and many others —have an annual death toll in excess of one million. CRISPR-based gene drives might be the best weapon we have against this pervasive threat. (152-153)

And here’s the even more head-spinning twist: If we were to regret making mosquitos extinct, we could potentially bring them back, Jurassic Park-style, in the same way that CRISPR could allow us to bring back from extinction the Wooly Mammoth and other species (118-119). Cue: #LawOfUnintendedConsequences!

None of this is an exaggeration. There really are earth-shattering consequences at stake. Indeed, the U.S. Senate Armed Services Committee in its Worldwide Threat Assessment has classified

genome editing as one of the six weapons of mass destruction and proliferation that nation-states might try to develop, at great risk to America. (The others were Russian cruise missiles, Syrian and Iraqi chemical weapons, and the nuclear programs of Iran, China, and North Korea.) (217)

There is indeed much to be wrestled with about the implications of forthcoming biotechnology. But we already live in a world in which CRISPR has made “the human genome as easily manipulable as that of a bacterium” (187). For almost all the related bioethical questions, the issue is not only “if,” but what and when and how and by whom?(188). To quote the late Marshall Nirenberg, who shared the Nobel Prize in 1968 for “breaking the genetic code”: “[Humanity’s] [power to shape [it’s] own destiny can be used wisely or unwisely, for the betterment or detriment of [humankind]” (189). The choice is ours.

At this point, I’m tempted to re-post my blog from a few month ago about Eugenics. But the truth is that twenty-first century bioethics is more complicated than merely rejecting twentieth-century eugenics, which in most cases was racist and repugnant. For a more twenty-first century perspective, consider the view of Charles Sabine, who lives with Huntington’s Disease: “Anyone who has to actually face the reality of one of these diseases is not going to have a remote compunction about thinking that there is any moral issue at all.” You may disagree. But there are people who feel strongly about pursuing the power of these new biotechnologies.

And for better or worse, we likely do not have the luxury of indecision. As the historian Howard Zinn liked to say, “You can’t stay neutral on a moving train.” We can decline to explore the bioethical frontiers, but other nations are already going ahead. As we wrestle with these and other forthcoming bioethical dilemmas, it may help to keep in mind Pope Francis’s message to Tim Cook, CEO of Apple: “Never has humanity had such power over itself. Yet nothing ensures it will be used wisely.” Cook’s related insight for recent MIT graduates is also crucial:

The frontiers of biotechnology are both fascinating and frightening. As we continue to explore the what is possible, one piece of guidance I remind myself of often is from the 4th Principle in my own tradition of Unitarian Universalism: the call to pursue “A free and responsible search for truth and meaning.”

September 21, 2017 American Muslims
Recent Comments
0 | Leave a Comment
"A Democracy IS a Dictatorship.You have many dictators instead of one.When withdrawing consent (IN THE ..."
crazysquirrel What Happens If We Withdraw Our ..."
"Thanks for this Carl! Perfect timing."
Allison “Fierce Self-Compassion”
"Whoever thought up the phrase "Defund the Police" should be run out of town on ..."
Michel What Does #DefundThePolice Really Mean? Awakening ..."
"All true, and there are a lot of stories which must be told...I only would ..."
Michel The Stories We Tell Matter: On ..."
Browse Our Archives
Related posts from Carl Gregg

The Soul & Self Knowledge
If consciousness exists, it exists as an effect of a cause.  Consciousness...

Suffering & Self Realization
"Be careful not to be tormented by yourself."-III Shinkun 2-24 The sages...