Ginger Lerner-Wren thought she knew what she was getting into. In 1996, she ran as a candidate for a judgeship in Broward County, Florida. After being elected, she was on her way to serving as a judge in the Criminal Division. What she didn’t know is that six months into her tenure she would be asked to take on an additional part-time role presiding over the first mental health court in the United States.

One of the reasons this court was created was the emergence of reputable studies showing that at least “one in six inmates has a diagnosable mental illness” (142). Many of these inmates could potentially have found a different path than jail had mental health courts been more widely available. Not everyone who commits a crime is the right fit for an alternative system such as a mental health court, but for those who are, such a problem-solving court can be life changing. And part of what fascinates me about Judge Lerner-Wren’s perspective is that for more than two decades she has had extensive experience as a judge both in the traditional criminal court system and this much newer experiment in therapeutic jurisprudence.

Allow me to be clear as well that I do not want to unfairly paint traditional criminal courts with too broad a brush, as being only concerned with punishing criminals. At the same time, I do want to highlight the difference it can make to cultivate a therapeutic approach that prioritizes attempts to be healing, helpful, and even curative to the defendant.

It is also important to emphasize that the mental health court continues to balance attempts to help defendants with the indisputable need to protect the public. Nevertheless, a profound reorientation can take place for all concerned in such cases, when the focus shifts from short-term punishment to long-term wellness (ix). In the judge’s words: “For the first time in the United States, a specialized problem-solving court was dedicated to the decriminalization of people with mental health problems,  and to use the court process to link individuals with community-based mental health care, from a recovery-oriented perspective” (ix). 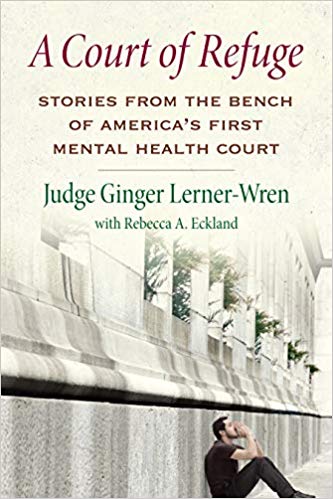 Looking back over the past twenty years, Judge Lerner-Wren has collected some of her most moving and memorable experiences in a book titled A Court of Refuge (Beacon Press, 2018). Reading these accounts, there were multiple times when I could understand the traditional impulse to ascertain if a person was guilty of one or more crimes—and if so, what punishment best fit the crime. But through the therapeutic process, the messy, complicated, many-layered humanity of everyone involved quickly became evident. And as people’s stories and backgrounds emerged, I could almost hear people thinking about a person they had perceived as ‘just a criminal’—as in, “Oh great! Now I have to deal with this person as a human being!”—to realizing how much they had in common.  And that kind of shift begins to get to the heart of the matter: everything changes when you begin to experience another person as a particular, unique human being like yourself, as opposed to seeing someone as one faceless generic object within a culturally-defined category such as “inmate” or “criminal.”

Let me tell you a bit more about what mental health courts mean in practice. The difference starts with little things, like the tone set at the beginning of a court session. I suspect most of us can imagine the classic bailiff pronouncing “All rise! The Court of Broward County is now in session, the Honorable Judge Lerner-Wren presiding.” Then everyone remains standing until the judge enters and is seated. In contrast, Judge Lerner-Wren took to entering alone and announcing, “Welcome to mental health court.” In her words, “The informality is important. The phrase helps to set the tone for a courtroom culture where human dignity, therapeutic justice, and the rule of law coexist” (13).

And instead of the typically adversarial court proceeding focused on ascertaining guilt or innocence related to a specific charge, she found it helpful to begin exploring the larger context and history. She often began with basic questions such as:

She was interested to discover through such open dialogues in court over the years that, “most people who have been referred to the court were high school graduates, had attended or graduated from college, and were working or had worked prior to their illness (82). These crucial pieces of people’s stories helped her collaborate with them to discern potential ways forward that might otherwise have been missed.

Much work, of course, remains to be done to make restorative justice, problem-solving, and more humane person-centered approaches more commonplace in our courtroom situations(165). But there is reason for hope. More than two decades ago in 1997, Judge Lerner-Wren was helping guide the first mental health court in the United States. Fast-forward to 2012 (which is the latest accounting I have seen) and according to the Bureau of Justice Statistics, “there were 3,052 problem-solving courts in the United States. The most common types of problem-solving courts were drug courts (44 percent) and mental health courts (11 percent)” (3). So that means there are now at least 334 other mental health courts across this county—and hopefully more to come.

Mental health courts are only one example of a larger movement bringing our society more in line with what my chosen tradition of Unitarian Universalism holds as our First Principle: “The inherent worth and dignity of every person.” In Judge Lerner-Wren’s words, “The rejection of stigma in favor of dignity is the essence of social justice.” And so the question for each of us becomes: what can I do—what can you do—within our various spheres of influence to create a world in which each human being can live a life of dignity?

March 8, 2019 A Clock on the Floor Runs Slower than One on a Table—& Other Wild Truths about Time
Recent Comments
0 | Leave a Comment
Browse Our Archives
get the latest from
Carl Gregg
Sign up for our newsletter
POPULAR AT PATHEOS More Voices
1

Medjugorje: When Mirjana Had the Courage...
Mystic Post
Related posts from Carl Gregg