“If You’re Not at the Table, You May Be on the Menu”: Principles of Social Justice

“If You’re Not at the Table, You May Be on the Menu”: Principles of Social Justice October 10, 2019 Carl Gregg

Here’s the thing about big words such as community, peace, liberty, and justice: they mean different things to different people. And I don’t mean to be flippant or insensitive when I say that there’s a lot of truth in the saying that, “One person’s terrorist is another person’s freedom fighter.” So much depends on one’s point of view.

So I want to invite us to reflect on what we mean when we say that we are for justice. I want to invite us to consider what people deserve and what they need. I want to invite us to ask, “What’s fair? And who decides? It matters, for instance, who is in the room when decisions about justice are made. As a slogan from the disability rights movement emphasizes, “Nothing about us without us.” Or as another aphorism reminds us, “If you’re not at the table, you may be on the menu.”

Along these lines, one of my touchstones for considering the questions of what’s fair and who decides is a book by the American political philosopher John Rawls (1921-2002) titled A Theory of Justice. One of the biggest takeaways from his book is a thought experiment that can be paradigm-shifting in how someone—especially someone raised with privilege—answers the question “What’s fair? And who decides?”

Rawls invites us to imagine that we are behind what he calls a “veil of ignorance.” From behind this veil, you do not know which advantages or disadvantages you would have in the imagined society under consideration—such as your gender, class, race, sexual orientation, ability, or religion. From this “original position,” you must choose “the principles of justice” that would structure the future society you would live in.

Now, perhaps you are a gambler, and want to play the odds. Maybe you are willing to design an unequal society in hopes that you will be lucky enough to come out on top when the veil is lifted and it is revealed which privileges and social advantages you will be assigned.

But Rawls assumes that the rational choice in your position would be to structure society in such a way that even the most vulnerable among us would have at least their basic needs met. Rawls’s theory of justice challenges us to fight for the same accommodations and dignity for others that we would want if we or our closest loved ones were in that situation (81). 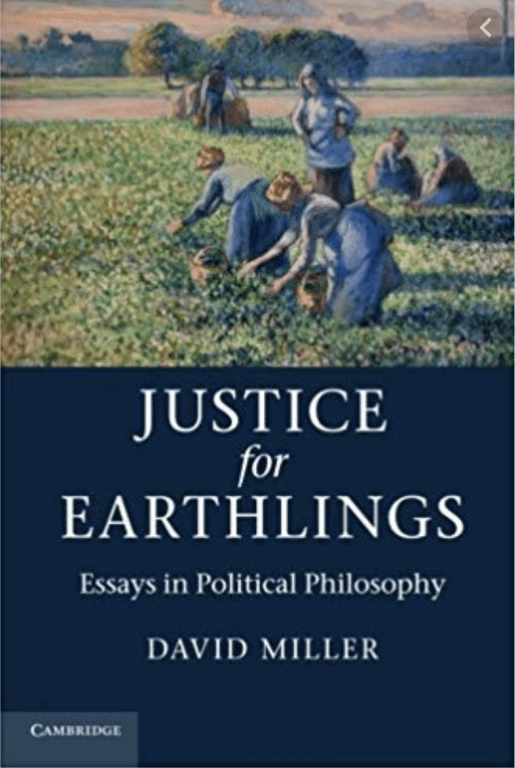 And as significant and helpful as I find this perspective, it’s worth considering that some of the contemporary ways we approach justice, at least the ways we have come to refer to them, are relatively recent in origin. It was only in the year 1900—barely more than a century ago—that the first book was published that included the term social justice in its title (4). And it is far more recent still—not until the last decades of the twentieth-century—that the term “global justice” became widespread (Miller 2013: 165). It is not only the word justice that we must wrestle with, but also the scale at which we seek to do justice in our globalized, pluralistic, postmodern world of 7.6 billion people–and climbing.

So, at the risk of oversimplifying, when we talk about social justice or global justice, one crude definition of what we mean is “how the good and bad things in life should be distributed” (Miller 2001: 1). “Who gets the advantages and who bears the burdens?” What’s fair? Who decides?

Let me say more using a set of cartoons. (Click on the link to view the cartoons. I’ll be here when you get  back.) Setting aside the unfortunate choice to make the situation about watching a baseball game at which the spectators have a high likelihood of being hit by a baseball—I have found this set of cartoons to be a clarifying visual aid for thinking about justice

Panel 1 (“equality”) shows why treating everyone the same is inadequate because people are not all the same. Giving everyone a box to stand on works out perfectly for the person in the middle, but the person on the left doesn’t need a box. And the person on the right, even when standing on the box, is still staring at the fence.

Panel 2 (“equity”) is a strategy of giving everyone what they need. In Marx’s language, “From each according to their ability (or resources); to each according to their socially recognized needs” (Gilbert 24). Note that in this second panel there are still three boxes total, but the tall person’s box on the left has been redistributed—Go social justice!—to the now joyous person on the right who can finally see over the fence!

Panel 3 (“reality”) is a sad reminder of our current state of extreme wealth inequality, in which the person on the left has absurdly too many boxes such that they are standing dangerously high up—and the person on the right is demoralizingly sitting in a hole. I have previously addressed wealth inequality at length, so I will limit myself to one data point for now. In the United States today,

Panel 4 (“liberation”) challenges us to take down the fence: to change the institution, the system, the structure that is holding people back in the first place. So although this cartoon isn’t perfect (and of course, nothing is), I invite you to use it as a tool to reflect on the ways you too may shift reality—within your spheres of influence—toward more equity or even toward collective liberation.

Along these lines, I have been heartened recently to hear more interest in Certified B Corporations, which are legally required to

consider the impact of their decisions on their workers, customers, suppliers, community and the environment…. B Corp companies must undergo a rigorous measurement of a company’s full environmental, social and governance (E.S.G.) commitment, which measures a company’s commitment to reducing environmental impact and supporting social justice as well as governance and engagement within their communities.

This stance is in contrast to the traditional understanding that corporations only exist to increase shareholder value. And while I celebrate an increase in the number of B Corporations, the deeper question for me is whether all corporations should be required to consider the impact of their decisions on other people and on this planet. Maybe we’ve been doing this wrong for quite a while now!  Sometimes we need to take down those walls that are keeping us from creating a world of peace, liberty, and justice—not merely for some, not merely for shareholders—but for all. For now, perhaps a greater awareness of Certified B Corporations can remind us that a better world is possible. I’m grateful to be with so many of you on our journey to create such a world. Together, may we turn our dreams into deeds.

October 14, 2019 Indigenous Peoples' Day, Scientific Knowledge, & the Teachings of Plants
Recent Comments
0 | Leave a Comment
"Yes, those who prefer to dream of a better world rather than accept the mess ..."
Barros Serrano Another World Is Possible: What Does ..."
""Wage labor is the bourgeois compromise between freedom and slavery."Modern "capitalism" (to use Marx's term ..."
Barros Serrano Alienated Labor, B.S. Jobs, & the ..."
"On this topic, I recommend two excellent social science resources: A book by Fordham Law ..."
Tim Bartik Another World Is Possible: What Does ..."
"I have long enjoyed all of your inspiring and informative pieces--and this one is my ..."
Nancy Pace Another World Is Possible: What Does ..."
Browse Our Archives
get the latest from
Carl Gregg
Sign up for our newsletter
POPULAR AT PATHEOS More Voices
1