How Democracies Die & An Education in Hope 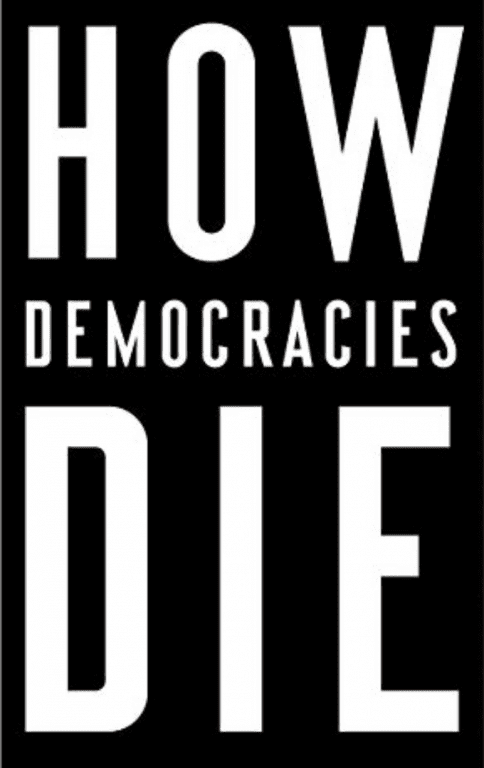 On Sunday, we passed the mark of being one year away from the next U.S. presidential election, which will be held on November 3, 2020. In reflecting on the current state of our body politic, one of the most helpful resources I have found is Steven Levitsky and Daniel Ziblatt’s powerful and accessible book, published last year with the sobering title of How Democracies Die. Both authors are professors of government at Harvard University. For most of their careers, they have been teaching, writing, and researching about historic dangers to democracy (Europe in the 1930s or Latin America in the 1970s) as well as new forms of contemporary authoritarianism around the world. But until the last few years, they never anticipated asking if democracy was in danger here at home (1).

Previously, they had trust in the strong supports for our democratic traditions:

But serious warning signs have started to appear. In their words:

American states, which were once praised by the great jurist Louis Brandeis as ‘laboratories of democracy,’ are in danger of becoming laboratories of authoritarianism as those in power rewrite electoral rules, redraw constituencies, and even redesign voting rights to ensure that they do not lose. And in 2016, for the first time in U.S. history, a man with no experience in public office, little observable commitment to constitutional rights, and clear authoritarian tendencies was elected president. (2)

To be clear up front, I will not try to parse the impeachment investigation. (You already have The Washington Post and many other media outlets doing that.)

One renown guide for protecting democratic norms is a small but seminal book published in 1978 titled The Breakdown of Democratic Regimes by the late Juan Linz (1926 – 2013), who for many years was a professor of sociology and political science at Yale University. “Born in Weimar Germany and raised amid Spain’s civil War, Linz knew all too well the perils of losing a democracy,” and he laid the foundations for an authoritarianism litmus test for determining whether a politician is acting anti-democratically (21).

According to the above political scientists, there is significant cause for concern if a politician does even one of the following:

In you are curious to learn more, Levisky’s and Ziblatt’s book How Democracies Die goes into the further details about each of those four categories (23-34).

They also detail—in ways we need to be direct and honest about—that President Trump has met all four criteria of that litmus test (65-67). To list only a few highlights:

I hope I am being clear that irrespective of partisan political differences, these anti-democratic and uncivil actions are neither normal nor ever acceptable in a liberal democracy such as the United States. “With the exception of Richard Nixon, no major-party presidential candidate met even one of these four criteria over the last century…. No other major presidential candidate in modern U.S. history, including Nixon, has demonstrated such a weak public commitment to constitutional rights and democratic norms” (65).

I should also add one other significant factor: President Trump’s compulsive lying and rampant use of Orwellian disinformation. He recently passed his 1,000th day in office, and according to the Fact Checker’s database used by The Washington Post, the latest count is that he has made 13,435 false or misleading claims during his time as president. “From the start of his presidency, he has averaged nearly 14 false or misleading claims a day.” To be honest, this rate of “exaggerated numbers, unwarranted boasts and outright falsehoods” is exhausting—and that is part of the point. 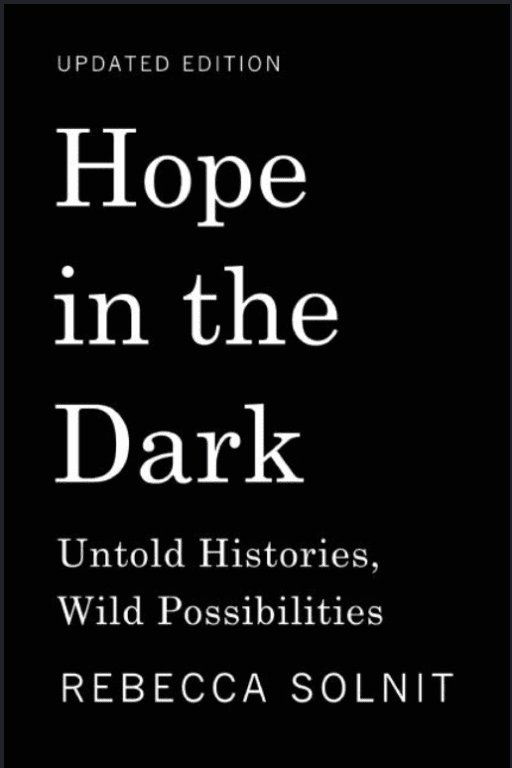 I could continue, but I want to emphasize not only the many real and present dangers to our democracy, but also why it is vital nevertheless to remain hopeful. And if you are in search of some hope at such a time as this, one book I would recommend is Hope in the Dark by Rebecca Solnit.

Now, I will readily admit that hope, wrongly understood, can seem naïve, an unwarranted optimism. False hope can make you want to scream, “Don’t you see how bad it is!” That is not the hope we need. “Hope is not the belief that everything was, is, or will be fine” (xiii). There is no guarantee of a better future. But if we give up hope of even the possibility that things could change for the better, then we capitulate all our power to the corrupt powers that be (xi).

The Brazilian educator Paulo Freire is best known for his paradigm-shifting book Pedagogy of the Oppressed. But for our current situation, his lesser-known follow-up Pedagogy of Hope may be more instructive. Here’s one crucial quote from that book: “Without a minimum of hope, we cannot so much as start the struggle. But without the struggle, hope dissipates, loses its bearings, and turns into hopelessness. And hopelessness can turn into tragic despair. Hence the need for a kind of education in hope” (12). I love that idea—of giving ourselves an education in hope.

Here’s the thing: no one really knows what the future holds. But we do ourselves and our forebears a disservice when we forget how much unlikely change has already happened. There was no guarantee that abolitionists would win the struggle to end slavery in the nineteenth century, that suffragettes would win the right to vote for women in the early twentieth century, that the freedom riders and so many other racial justice activists would come out on top in the civil rights movement, that LGBTQ+ citizens of this country would achieve same-sex marriage rights. We can do hard things!

In contrast, however, there are those in every age who benefit from claiming that the status quo is “immutable, inevitable, and invulnerable.” But it is none of those things (xix). Everything changes. The only real guarantee is impermanence. As you sometimes hear in meditation circles, “Whatever has the nature to arise—whether pleasant, unpleasant, or neutral—also has the nature to pass away.” Whatever is the present case, “This too shall pass.” Change is gonna come. Our invitation, our call, our challenge is to influence the direction in which change happens—to help “bend the arc of the universe toward justice.”

Consider this quote from Václav Havel (1936-2011), written from a jail cell where he had been unjustly imprisoned for writing dissident literature. A few years later he would be elected President of Czechoslovakia, but there was no guarantee of that victory when he penned these words:

The kind of hope I often think about (especially in situations that are particularly hopeless, such as prison) I understand above all as a state of mind, not a state of the world…. Hope is not prognostication. It is an orientation of the spirit, an orientation of the heart; it transcends the world that is immediately experienced, and is anchored somewhere beyond its horizons. Hope, in this deep and powerful sense, is not the same as joy that things are going well, or willingness to invest in enterprises that are obviously headed for early success, but, rather, an ability to work for something because it is good, not just because it stands a chance to success. (11)

We are called to give ourselves—our lives, our time, our energy—in the struggle for human dignity, justice, equity, compassion, peace, liberty, and democracy, not because we are guaranteed to achieve those goals, but because they are good and true and right.

Over the last few years as our core values have been increasingly under threat, one of my guides has been the frequently prescient Sarah Kendzior. She is a journalist with an academic expertise on authoritarianism. The focus of her doctoral dissertation was “how the Uzbekistan dictatorship employed the Internet to undermine public trust in and manipulate the media,” so let’s say she has quite the skill set for connecting the dots with current events here in the U.S.

On November 18, 2016, ten days after the most recent presidential election, she wrote a powerful essay seeking to draw on what she had learned from studying totalitarianism in the states that were formerly part of the Soviet Union, for what we might do to counter authoritarianism here in the U.S. I’ll share with you just a brief excerpt of her wisdom for such a time as this:

what standards you hold for yourself and for others.

your dreams for the future and

your hopes for your children.

the struggle of your ancestors and how

the hardship they overcame shaped the person you are today…..

You still have your freedom,

There are many groups organizing for both resistance and subsistence,

but we are heading into dark times, and you need to be your own light.

Do not accept brutality and cruelty as normal

even if it is sanctioned.

Protect the vulnerable and encourage the afraid.

If you are brave, stand up for others.

But most of all, never lose sight of

who you are and

If you find yourself doing something that feels questionable or wrong

a few months or years from now,

find that essay you wrote on who you are and read it.

Ask if that version of yourself would have done the same thing.

And if the answer is no?

October 30, 2019
Defense Against the Dark Arts: Harry Potter for Such a Time as This
Next Post

November 12, 2019 How Change Happens: Why do some social movements succeed & others fail?
Recent Comments
0 | Leave a Comment
Browse Our Archives
Related posts from Carl Gregg 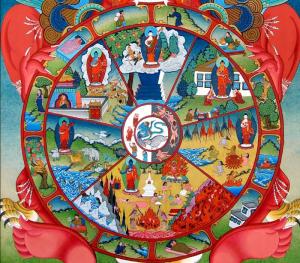