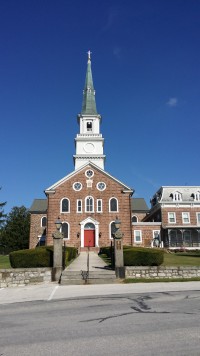 The American Catholic Almanac: A Daily Reader of Patriots, Saints, Rogues, and Ordinary People Who Changed the United States by Brian Burch and Emily Stimpson is one of those books you will return to again and again. A fine resource that could be used for homeschooling or self – enrichment the books daily readings are wide ranging and cover the gambit of Catholicism in the history of the United States.

Image Books has asked me to participate in their blog tour of the book. Each blogger was asked to pick one of the daily entries to write about. I have chosen the entry for Feb. 4 titled “The Church at the Rapids”. This entry deals with a church very near and dear to my heart. The church I consider my second parish, The Basilica of the Sacred Heart or as we locals have called it for centuries, the Conewago Chapel.

The Conewago Chapel’s claim to fame is that it was the first stone church built in the United States. The community was celebrating Mass well before 1787 when the present day church was built. The Catholics in the area were celebrating Mass before it was legal to do so but unfortunately the Mass house utilized prior to the building of the present day church is no longer standing.

A strong point to be made is that the Conewago Chapel was the epicenter of Catholicism in the early United States. The Catholic faith spread over southern and western Maryland, into Virginia, east to Philadelphia and west to Pittsburgh. Hanover, Littlestown, Taneytown, Bonneauville, Gettysburg, Carlisle, York, Harrisburg and New Oxford all sprung up thanks to the aid of the Jesuits stationed at Conewago Chapel. In fact parishes as far west as Pittsburgh were staffed by the circuit riders who came out of the Chapel.

Beyond its history of prominence in Catholicism in the United States is the beautiful artwork contained within its walls. The Chapel houses many gorgeous paintings that art museums would envy. Indeed more than one person has been moved to tears upon first seeing the interior. Many of these are the work of German artist, Franz Stecker. Mr. Stecker, famous for his portrayal of sacred objects, came to the United States in 1848. He returned to Austria in 1850 and died three years later at the age of 39. The remainder of this article will serve as a tour of these paintings. 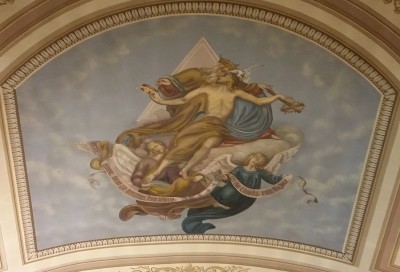 Prominently displayed on the side walls and ceiling at the front of the church are paintings detailing the life of Christ. While facing the altar the painting on the upper left ceiling depicts the Christ handing over his crown of glory and taking up the cross and thorns. 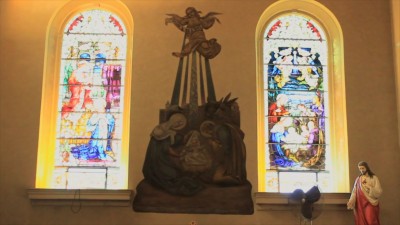 On the left side wall you will find The Nativity. 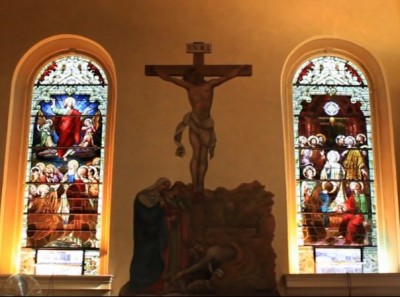 On the right side wall, The Crucifixion. 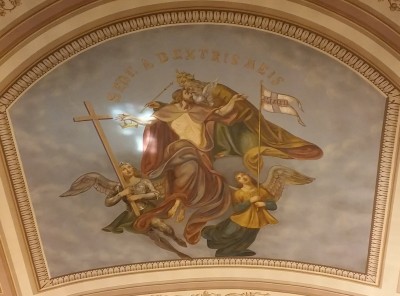 On the upper right ceiling is depicted Christ’s triumphant ascension into heaven. 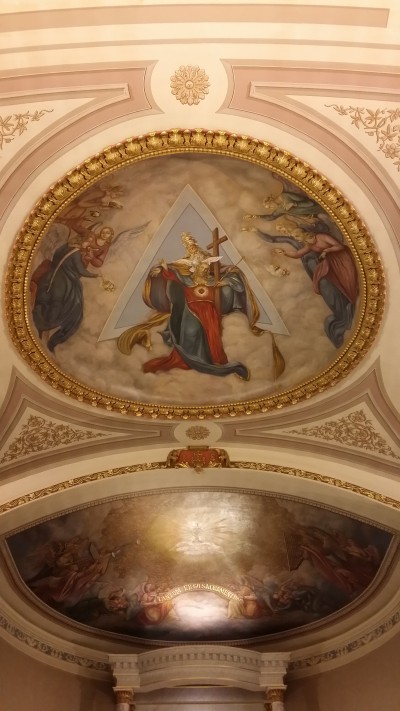 In the center of the ceiling is a gorgeous painting of the Trinity with Christ revealing his sacred heart. 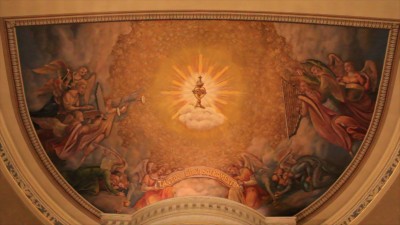 Directly above the altar is a painting of a monstrance surrounded by the heavenly hosts and with angels playing trumpets on bended knee. 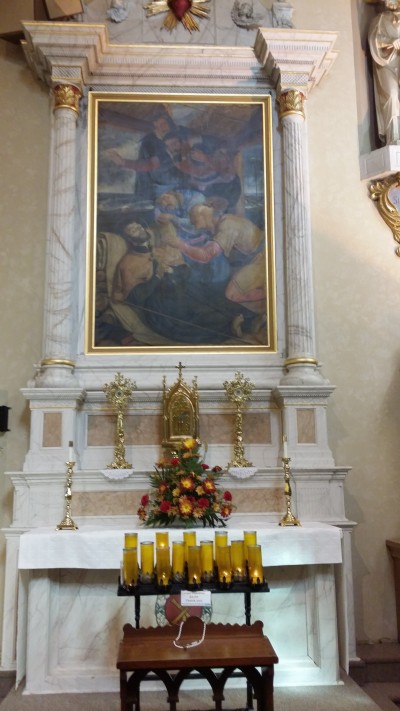 Over the side altar is another Stecker painting depicting the death of St. Francis Xavier. 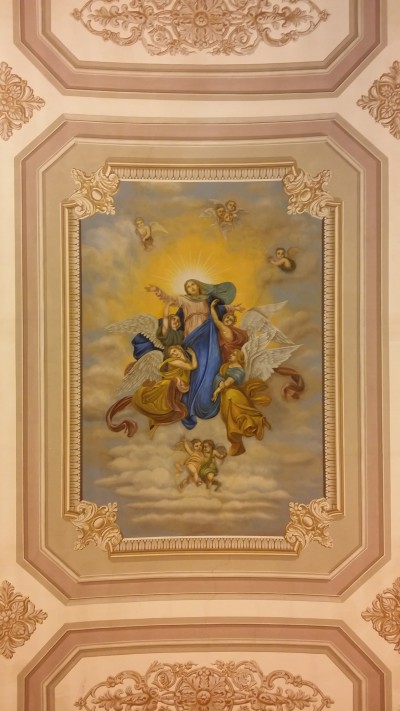 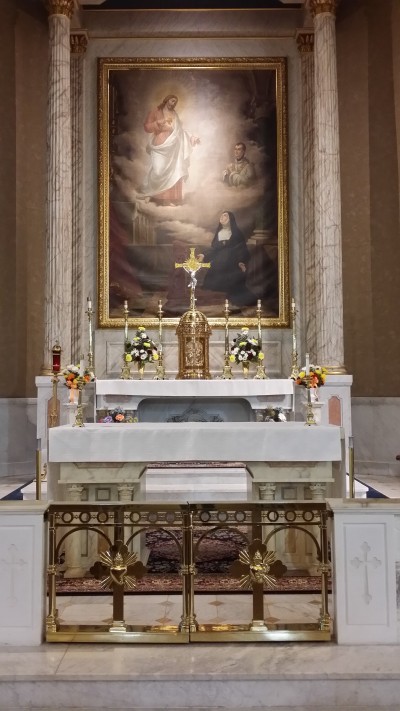 Over the altar is a Constagnini painting commissioned in 1887 of Christ appearing to Sister Margaret Mary.

In closing the Conewago Chapel was named a Basilic in 1962 by Saint Pope John XXIII. In 1975 it was added to the National Register of Historical Places. I hope you have enjoyed this brief “virtual” tour of the paintings within The Sacred Heart Basilica. If you are ever in the area feel free to stop in and see for yourself “The Church at the Rapids”. 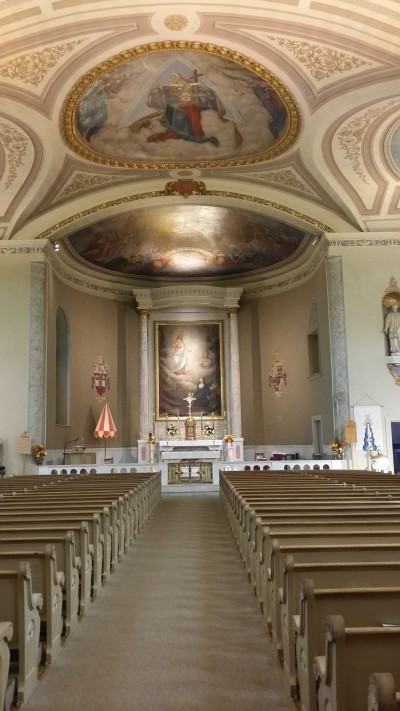 October 4, 2014 Church Fathers, Day Seventy-Five: St. Ambrose says cooperation is a law of nature
Recent Comments
0 | Leave a Comment
Browse Our Archives
get the latest from
Catholic
Sign up for our newsletter
POPULAR AT PATHEOS Catholic
1