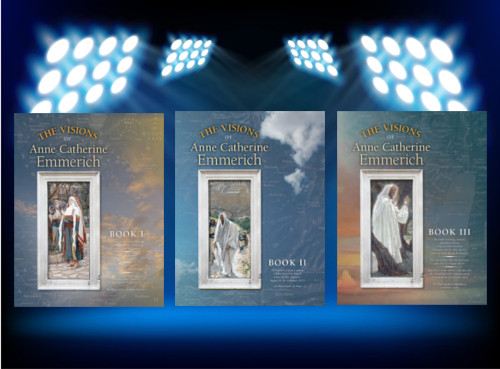 A decade ago Angelico Press embarked upon what can be best called a labor of love. The have recently released the fruits of that labor. The three volume set The Visions of Anne Catherine Emmerich  (First Journeys of Jesus (Volume 1), The Journeys of Jesus Continue Till Just Before the Passion(Volume 2), The Final Teachings, Passion, & What Follows (Volume 3)

) is like no other previously released edition. The books are printed in double-column, large text format and total a combined 1700 pages! Another beautiful edition to these volumes are the inclusion of all 350 paintings on the life of Jesus by James Tissot.

Anne Catherine Emmerich was an Augustinian nun who loved from 1774 – 1824. IN November 1812, Anne Catherine became permanently bedridden. Shortly thereafter she received the stigmata, the wounds of Christ. From that day forward she lived almost exclusively on water and the Eucharist. Beginning in 1819 until her death on February 9, 1824 Anne Catherine began relaying the content of her visions to the poet Clemens Brentano. He met almost daily with Anne Catherine and kept notebooks of her visions These notebooks total nearly 38 volumes. He took his notes and in 1833 he published his first volume, The Dolorous Passion of Our Lord Jesus Christ according to the Meditations of Anne Catherine Emmerich. Brentano next began compiling what would eventually be titled The Life of the Blessed Virgin Mary From the Visions of Anna Catherine Emmerich for publication, but he died in 1842. The book was published posthumously in 1852.

Beyond Clemens Brentano’s two books there have been numerous other editions published of Anne Catherine’s visions. Some of these have received considerable negative reviews due to the fact that material beyond Clemens Brentano’s notes was included or his writing was manipulated. Angelico Press’ version has the advantage of being perhaps the most reliable compilation of his work as the they went straight the source and used the recently published 38 volumes of Brentano’s notes for their research.

Anne Catherine’s visions are well known for the minute detail she has had for the daily life of Jesus Christ. Despite the fact that she had never been outside her home country of Germany and that for a better part of her life she never left the confines of her bed, she was able to provide extraordinary details on the places Jesus visited as well his miracles, his ministry and the people who surrounded him. In fact, her visions provide so much detail the Mel Gibson used them for his film The Passion of Christ. Another interesting fact Is that her visions have proven to be geographically accurate as they were used to find the location of the House of the Virgin Mary, the Blessed Virgin’s supposed home before her Assumption, located in Ephesus, Turkey.

Through the years many have questioned the authenticity of Anne Catherine’s visions. The Church considers these to be private revelation meaning these visions have occurred outside the time frame of Scripture. There are a few things to consider when approaching these volumes.

Firstly, the Church has neither condemned nor approved them. This means the laity are free to read them but should not consider them “gospel” so to speak. The Scriptures are the only authenticated writings on the life of Christ this any further volumes on his life do not add to the Deposit of Faith in Scripture and are not binding. It cannot be denied however that many have been moved by these readings which has led to an increase in their faith.

Secondly, Anne Catherine Emmerich was beatified by Pope John Paul II on October 3, 2004. In his homily the pontiff said:

Anna Katharina Emmerick served salvation in both ways. Her words, which have reached innumerable people in many languages from her modest room in Dülmen through the writings of Clemens Brentano, are an outstanding proclamation of the gospel in service to salvation right up to the present day. At the same time, however, Anna Katharina Emmerick understood her suffering as a service to salvation. Dr. Wesener, her doctor, recounts her petition in his diary: “I have always requested for myself as a special gift from God that I suffer for those who are on the wrong path due to error or weakness, and that, if possible, I make reparation for them.” It has been reported that Anna Katharina Emmerick gave many of her visitors religious assistance and consolation. Her words had this power because she brought her life and suffering into the service of salvation.

In addition to Pope John Paul II many have spoken favorably of Sister Emmerich. Most notably Blessed Pope Pius IX, who encouraged the cause for her sainthood, and St. John Neumann, who recommended the reading of the Brentano’s books. Judgements of this nature and by such holy men can be used to lend a sense of validity to these writings. I however must stress once more that these volumes should be taken as they are and not construed to add to or take away from the binding text of Scripture.

Angelico Press has done readers a service by providing perhaps the most authentic translation of Anne Catherine Emmerich’s visions available today. The inclusion of the beautiful illustrations and the highly detailed maps really set this three volume work apart from the rest. Much can be gained by the reading of these books including an increased devotion to and love for Christ. That is our duty in life…to know Him, to love Him and to serve Him. If a book can help us do that then it has unspeakable value. This three volume set is one such case.

March 31, 2016 Mary in the upper room at Pentecost, Mary: Day 254
Recent Comments
2 Comments | Leave a Comment
Browse Our Archives
get the latest from
Catholic
Sign up for our newsletter
POPULAR AT PATHEOS Catholic
1