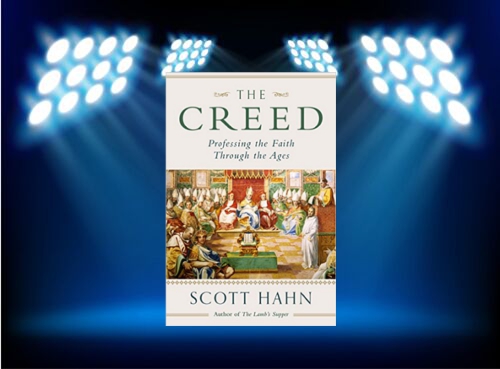 Throughout history the Church has used creeds to teach and declare her beliefs. She has used creeds to correct the wrongs of multiple heresies. Believers of today may only be familiar with the Nicene Creed but more have existed. Scott Hahn takes readers through a journey in Church history to explain the relevance and meaning of these creeds in his latest book The Creed: Professing the Faith through the Ages.

From the days of the early church you will find various forms of creeds in use. “The rule of faith, then is the general category we use to describe these primitive declarations of faith. Usually delivered in sermons and recited or accepted upon Baptism, they were summary statements of the most important – the most basic and essential – points of Christian faith.”

As time passed these statements of faith were tailored to combat the various and localized heresies that sprung up against the early Church. “If an author was battling a particular sort of heresy, he emphasized the doctrine that was challenged by the heretics. Thus Iranaeus expanded upon the goodness of creation, Tertullian on the triune Godhead, and Clement of Alexandria on the necessity of the Church.” These declarations of faith crafted by various authors all serve one overarching purpose. To shore up the church and to educate and correct her followers.

As crisis and persecution endangered the early church it became necessary to formulate a universal rule of faith. This necessity led to the Council of Nicea in 318 and the creed we are familiar with today. The crisis was the rampant spread of what had become known as Arianism. Arianism, named after its author Arius, proclaimed that Jesus was subordinate to the Father (not one with) and as Scott describes it “a creature, though the greatest of creatures. Jesus was “god,” according to Arius, but only because God adopted him and gave him the gift of divinity.”

Just because the creed was made official at Nicea, it did not mean the church was done dealing with heresies. The creed required one more bit of fine tuning at the Council of Constantinople In 380. Throughout all of these changes it is important to note this. These words that we routinely repeat every Sunday had real meaning to people when they were fist produced. Even when some tried to tamper with the creed with as little as a one word change. That one word made all the difference. “The great Fathers of the fourth century knew that, and they were willing to give their lives rather than change the articles of’ the creed.”

The creed is what binds us together as Catholics It’s the constant in every Mass throughout the world. Scott hits the nail on the head very early in the book with the following statement that I kept returning to as I read The Creed. “It’s significant that, in our liturgy, the Creed follows after the Bible readings, since the Creed is a summary of the history of salvation. It’s helpful, too, that it comes after the homily. So even if our pastor is having a bad day and his sermon notes don’t quite come together, we always end well with the Rule of Faith. And so, in the words of the Church, we ‘renew’ our baptismal covenant with the words of the Creed. And we are renewed.”

Scott Hahn masterfully weaves an easy to read book that takes a deep dive look at the role and importance of creeds in the history of the church. It is important to study the creed and have a real understanding of what is that we are reciting each week. It is equally important for us to remember that people in the early church chose to DIE for what those words meant. Scott Hahn has provided a book to help readers better understand the creeds significance in our faith journey. Our church was built upon those creeds. The early church fathers defended those creeds. Members of the early church gave up their lives for those creeds. The question is would we be willing to do the same?

Visit Emmaus Road to get your own copy of The Creed.

June 2, 2016 The most lamentable event in world history: Mary, Day 317
Recent Comments
0 | Leave a Comment
Browse Our Archives
get the latest from
Catholic
Sign up for our newsletter
POPULAR AT PATHEOS Catholic
1