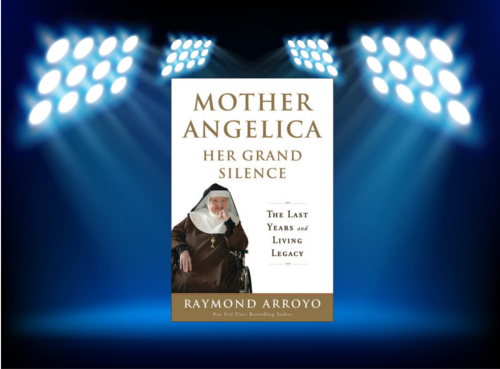 When we first heard the news I believe we were all in a state of sadness. We were aware of the fragility of Mother Angelica’s health but the loss still stings. Our beloved Mother Angelica passed only a few short months ago and Raymond Arroyo delivers in a book that gives an overview of the last years of Mother’s life. Mother Angelica Her Grand Silence: The Last Years and Living Legacypulls the curtain back on the silent years of Mother. Years we were not privy too. Time spent that was spent in prayer and sacrifice for us.

The book opens in 2001 with the final interview Raymond would conduct with Mother Angelica. Mother was now retired from EWTN and her priorities had changed. Her focus was on the monastery and expansion of her community was in her sights. These plans would come to an abrupt halt when in December 2001 Mother suffered a debilitating stroke that nearly ended her life. “Emergency surgery and the prayers of her sisters were all that saved her. Given the oxygen deprivation she experienced, her recovery was, in the words of one doctor “miraculous.” With the help of a walker she moved about the monastery and resettled into community life.” From what we saw of her on TV we know Mother had spunk…and that certainly did not change.

In the pages of the book we read of a secret trip Mother made in 2004 with to Japan. Accompanied by sisters and trusted friends, the trip was made to investigate the possibility of opening a new monastery for the Poor Clares of Perpetual Adoration, Mother Angelica’s order. The trip was completed but the plans fell through. Not only was the trip unsuccessful but the following year Mother’s health took a turn for the worse.

The remainder of her life Mother would spend in her room bedridden. Frequently visited by her sisters much of her time was spent in prayer. She prayed her way through division in the monastery. Without Mother’s guiding hand politics took over and a struggle for leadership ensued. This was eventually sorted out but not without the intervention of the Vatican itself.

Aside from this period of tension, there stories of possible bilocation, battles with the enemy, Satan himself, and multiple lives touched by this simple nun from Ohio. Raymond shares an entire chapter of letters sent to Mother. Letters of appreciation for how the writers’ lives were changed by Mother’s lessons. It became starkly evident as I weaved my way through the book just how many people Mother impacted. I think in the back of our minds we suspect it but reading these personal letters drives the point home. They serve as a beautiful witness to Mother’s life work.

“She told me once: “We must be unafraid of ridicule or human respect, unafraid to walk out alone, knowing that we are nothing and can do nothing on our own. But with His grace and His power you can do all things.” Her life was a living monument to that faithful approach. In the end, it wasn’t about Mother, but about whether God permitted something to happen or not.”

As it is with this book. The story of the last years of Mother’s life are not about her. They are about what God allowed to happen around the nun we had all grown to love. The real story is about the work Mother performed in answer to a call by God.  Those final years were perhaps her most important. A life in almost complete silence and relegated to prayer. Work that we may never truly understand what the results were. Work that touched countless lives including that of author Raymond Arroyo. Mother……you will be missed.

What Not to Say to a...
Steel Magnificat
Related posts from The Catholic Book Blogger