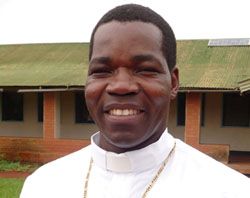 Yambio, Jul 14, 2014 / 02:03 am (CNA/EWTN News).- The “disgraceful case” of Sudanese Christian Meriam Ibrahim is only one of many examples of discrimination and harassment faced by Christians in Sudan, a bishop in the region has said.

“Christians in Sudan can attend divine service unmolested, but there is no genuine freedom of religion and conscience in the country,” Bishop Edward Kussala told Aid to the Church in Need July 10.

Bishop Kussala heads the Diocese of Tombura-Yamibo in South Sudan, a country which became independent from its northern neighbor in 2011. The region suffered a bloody civil war from 1983 to 2005.

Ibrahim, who was born to a Muslim father but raised a Christian, was sentenced to death in May 2014 for alleged apostasy from Islam. She was also sentenced to flogging for adultery on the grounds that Sudanese law does not recognize her marriage to a Christian man. Ibrahim, who would not renounce her faith, gave birth to a baby girl in prison with her legs shackled.

She was released on appeal in late June, re-arrested while trying to leave the country, then released again. She and her husband are presently at the U.S. Embassy to Sudan, hoping to move to the U.S., where her husband is a citizen.

Bishop Kussala said that there are other religious freedom problems in Sudan. Priests and bishops live “as de facto illegals” and are barred from holding passports.

“They cannot leave the country and would likely be barred from returning should they leave,” the bishop said.

Some priests have been expelled from the country, and “the bishops are condemned to remain silent,” he added.

About 3 million Christians live in Sudan. While they have the same constitutional rights as Muslims, these are not enforced equally and the Sudanese government holds Christians responsible for the breakaway of South Sudan.

Bishop Kussala said that the Church “does not pursue any political aims.”

“We only call upon politicians to respect freedom of religious faith and conscience.”

In May, Rep. Chris Smith (R-N.J.) suggested that the Sudanese' government's refusal to recognize religious fredom was a motivation for the region's lengthy civil war.

Sudan's population is 97 percent Muslim, and the nation scored an 11 out of 100 in Transparency International's 2013 Corruption Perceptions Index, ranking at 174 out of 177 among nations based on the perception of their public sector corruption – ahead of only Afghanistan, North Korea, and Somalia.

Since 1999, the U.S. state department has listed Sudan as a country of particular concern due to religious freedom violations.

The U.S. Commission on International Religious Freedom, which advises the U.S. government, said in its 2014 report that Sudan’s government “continues to engage in systematic, ongoing, and egregious violations of freedom of religion or belief.” The report noted that the country’s “restrictive interpretation of Shariah law” is imposed on both Muslims and non-Muslims.

Bishop Kussala called on Catholics, especially those in the West, to pray for their fellow Christians in Sudan. He also asked them to work to bring attention of their suffering and persecution to their lawmakers.

July 14, 2014 Christians disappearing from Iraq, bishops lament
Browse Our Archives
get the latest from
Catholic News
Sign up for our newsletter
POPULAR AT PATHEOS Catholic
1

If Pro-Lifers Took Seriously Certain Issues
One of the most important causes of Christians living in North America...
view all Catholic blogs
Copyright 2008-2021, Patheos. All rights reserved.
error: Content is protected !!