In a speech this week during the 19th National Congress of the Communist Party of China, Xi said that religions not sufficiently conformed to Communist ideals pose a threat to the country’s government, and therefore must become more “Chinese-oriented.”

While these comments were reportedly intended particularly for Tibetan Buddhists, who have lobbied for independence from China, it could also mean a cooling of the already-rocky relations between the Vatican and China.

Diplomatic ties between the Church and China were all but cut in 1951, when the communist party took control over Beijing. Members of the Communist Party in China are technically not allowed to hold any religious views.

Recently, Benedict XVI and Pope Francis have worked to re-establish diplomatic relations with the country, though it has been a slow and arduous process.

While the Chinese government technically recognizes Catholicism as one of five religions in the country, it does not recognize many Church leaders appointed by the Vatican, driving many among the Catholic Church leadership and laity underground.

The Chinese government established the Chinese Catholic Patriotic Association (PA), which is a sort of alternative ecclesiastical hierarchy officially recognized by the Chinese authorities.

Pope Emeritus Benedict XVI has called the PA “incompatible with Catholic doctrine,” since it recognizes both legitimately and illegitimately appointed bishops.

The Vatican and the Chinese government are in ongoing talks about the recognition and appointment of bishops. The most current proposal would allow the government to select possible episcopal candidates and send the names to the Pope for approval or denial.

In May, Chinese Cardinal Joseph Zen said that the danger of this proposal is that the Pope could be forced to approve a “bad bishop,” or see decisions ignored by the Chinese government.

Currently, the Vatican sends a list of potential candidates to Beijing for approval or denial before appointing bishops. At issue is that that Beijing also independently nominates bishops for leadership positions in the PA.

Cardinal Zen said he hoped the Church throughout the world would “intensify their prayers” for the Church in China, which continues to be persecuted in the officially-atheist country even as relations thaw.

According to a report earlier this year by US-based NGO Freedom House, violent and non-violent religious persecution has seen an overall increase in China since President Jinping came to power in 2012. 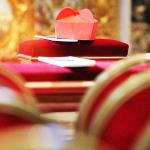 October 25, 2017
Cardinal Vidal Remembered as a Peacemaker, Pastor
Next Post

October 26, 2017 He overcame prison and drug addiction - thanks to the rosary
Browse Our Archives
get the latest updates from
Catholic News
and the Patheos
Catholic
Channel
POPULAR AT PATHEOS Catholic
1