New York City, N.Y., Oct 12, 2017 / 12:08 am (CNA/EWTN News).- Armed conflicts brings out “the most vicious forms of violence against children” and the world must act to aid the young victims of violence and all unaccompanied children worldwide, the Holy See has said at the United Nations.

“Never in recent memory have so many children been subjected to such violent brutality: children used as soldiers, suicide bombers, sex slaves, and disposable intelligence-gatherers in the most dangerous military operations,” Archbishop Bernardito Auza lamented. “The deliberate destruction of their schools and hospitals in total disregard of international humanitarian law has become a strategy of war.”

Archbishop Auza, the apostolic nuncio heading the Holy See’s permanent observer mission to the United Nations, spoke Oct. 10 to the U.N. General Assembly’s Social, Humanitarian and Cultural Affairs Committee, also known as the Third Committee. He spoke regarding the promotion and protection of the rights of children.

The Holy See and the Catholic Church have worked with the U.N. and others to oppose the use of children as combatants and violence against children. They aim to help relieve their suffering and “accompany them on the road to full reintegration with their families and society.”

“Children are first and foremost human beings with fundamental human rights,” Auza said. “They cannot be left voiceless and invisible. Their best interests must be recognized and respected. Their protection and integration must therefore be a primordial concern for all.”

He cited a 500 percent increase in the number of unaccompanied refugee and migrant children from 66,000 in 2010 to at least 300,000 in 2016. The proportion of children among migrants and refugees is growing, the nuncio added.

“An estimated 535 million children live in countries suffering from conflicts, ethnic or religious persecutions, violence, natural disasters and extreme poverty,” he said. “Millions of desperate children are fleeing their home countries without the protection of their families. Parents are constrained to see their children leave without them, hoping that after a perilous journey they will find welcome and protection somewhere.”

Unaccompanied children are among the 250 million migrants who have crossed international borders, and 65 million of these are refugees.

“They have fled from their countries desperate to find safe haven from persecutions and violent conflicts,” Auza continued. “They have abandoned once fertile lands which are turning into deserts, or they simply want a better life for themselves and for their loved ones, most especially for their children.”

Auza recounted Pope Francis’ emphasis on the importance of the Convention on the Rights of the Child to provide a basis to protect child migrants from homelessness and exploitation. Its legal obligations for states that adhere to it cannot be disregarded arbitrarily.

These include measures like proper identification and registration for children, the designation of guardians, and the rights to education and health care.

Specific efforts to protect child migrants include family re-tracing and reunification, education, and other long-term programs. There are child migrant advocacy efforts in schools and parishes. Many efforts also target the root causes of child migration.

“The Holy See and the Catholic Church throughout the world always strive to welcome, to protect, to promote and to integrate those who flee from adverse conditions, in particular children who are most vulnerable,” Auza said.

October 11, 2017
Six years ago, this Catholic college was the first to sue over the HHS mandate
Next Post 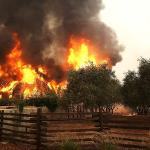 October 12, 2017 Bishop Vasa on California Fires: 'Our Diocese Has Been Hit Hard'
Browse Our Archives
get the latest from
Catholic News
Sign up for our newsletter
POPULAR AT PATHEOS Catholic
1

Don't Have Sex If You're Not Ready To...
Happy Father's Day Dads. The message of Mother’s Day is “Mothers are...
view all Catholic blogs
Copyright 2008-2021, Patheos. All rights reserved.