Call me a Grinch, but there’s absolutely no reason for getting into the Christmas spirit when Thanksgiving hasn’t even happened yet (Sorry super mega-department stores with your early Christmas decorations). But I will make an exception when it comes to Sufjan Stevens’ new Christmas offering, Silver & Gold. This is the second of Sufjan’s Christmas sets — his first, Songs for Christmas, came out in 2006 — and is a collection of nearly 60 original and traditional holiday songs.

Listening to Sufjan’s renditions of these classic Christmas carols — which range in tone from cheeky to casual to reverent — as well as his own contributions to the seasonal canon, one can’t help but be struck by the way in which he redeems the songs from their status as cheesy, overly-familiar tunes that have been stripped of much of their profundity by Christmas pageants, TV commercials, and department store muzak.

At their best, which is to say almost always, the renditions on these 5 discs ultimately serve as a reminder that Christmas carols are actually some of Christian theology’s best and brightest proponents, encapsulating both the wonderful dread and terrible hope that lies at the heart of the holiday.

If nothing else, it’ll likely be the only Christmas album you’ll hear with song titles like “Lumberjack Christmas / No One Can Save You From Christmases Past”, “Particle Physics”, and “Christmas Unicorn”.

November 13, 2012
Rod Dreher: "Apocalypticism is a narcotic among millions of American Christians"
Next Post 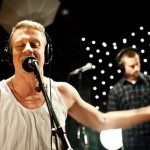 November 13, 2012 The Feedback Loop: The Politics and Theology of Macklemore
Recent Comments
3 Comments | Leave a Comment
Browse Our Archives
get the latest from
Evangelical
Sign up for our newsletter
POPULAR AT PATHEOS Evangelical
1

On Not Throwing the Baby Out...
Roger E. Olson
Related posts from Christ and Pop Culture