I am George Bailey: ‘It’s a Wonderful Life’ and Obsession With Personal Achievement

I am George Bailey: ‘It’s a Wonderful Life’ and Obsession With Personal Achievement December 24, 2012 Nick Rynerson

I am George Bailey.

Well, at least that’s what my wife tells me whenever we watch It’s a Wonderful Life, Frank Capra’s classic film that has turned into the Christmas film. If you haven’t seen it (seriously?), it is a story about George Bailey, a man with big dreams stuck in a small town that he just can’t seem to escape.

Every time I watch it, I cry. Not just at the climatic parts, but throughout the entire film. Start to finish. Heck, last night my wife and I went to see it at one of those neat old theatres that have the concession stand in the theater and I cried ordering our popcorn. I don’t cry during It’s a Wonderful Life because of sentimental impulses or fond memories, I cry because I am George Bailey.

Let me explain myself. I clearly am not ‘It’s a Wonderful Life’ star Jimmy Stewart (He’s got about 70 years on me and an enviable complexion) but as my life has unfolded, doggone-it  it just keeps taking Bailey-esque turns and I react in Bailey-eqsue ways. George Bailey is a selfish man, with a hell of a skill set and the ambition to match. Bailey is the kind of guy who you just know is going to do big things. He wants to travel the world, build skyscrapers and get out of his crummy little town.

But there is a war going on in his soul, a heated battle between his ambition and the people around him that he loves. When he is about to go off to college after his father dies, Mr. Potter, the town Rockefeller-figure wants to shut down the Bailey Building & Loan, the only holdout against a Potter monopoly in Bedford Falls, George sets aside his plans (just for a while of course…) and steers the Bailey Building & Loan ship. And while he makes many a sacrifice like this in the big moments, in the little moments of the film Bailey is self-driven, self-focused and two steps from leaving Bedford Falls for the self-fulfilling thrill of achievement. Don’t get me wrong. It isn’t all selfish ambition. He does want to make a difference. And he wants to make a difference on a big scale, in the city, reaching as many people as possible. But that isn’t where George Bailey is needed.

As this heartbreaking internal struggle goes on, he takes over the business indefinitely, gets married (which he said he’d never do) and has four children, all in the town that he swore he would leave in the dust.

Here’s where I come in. I am ambitious; way too ambitious for my own good sometimes. I want to save the world, have as much influence as possible and be a change agent. “And why not?”, I tell myself, “I am young (21 to be exact), intelligent (I know, I know…arrogant too) and I have a bright future (see what I mean?)”. My plan was and is to go to seminary, crank that out in 2 years flat, keep blogging, move to a big city and change the world. But this year I got married to the gal of my dreams. She totally supports my pipe dreams. But the thing is, we want to have a family and I am a part of a growing church in the town that I was born in: Normal, Illinois… my Bedford Falls.

There is this Bailey-esque war inside of me. I wanted to do great things, but loving people has slowed me down. While George Bailey may be the most selfish person in the movie, he has a heart the size of Texas. Just like Romans 7, the George Bailey war of self versus others only exists in those who want to do the right thing but find themselves compelled to do the opposite. The knowledge of the truth mixed with the desires of the flesh and stirred to hostilities is what leads George Bailey to the brink of suicide. George sees his own dreams dying. He cannot and will not save them at the expense of the welfare of his friends and family. But it is a bloody battle. Mr. Potter never contemplated suicide. His selfishness was unchallenged. But George was at war.

And while the theological dynamics of It’s a Wonderful Life are superstition-driven at best, God has used it this year to bring about a deep (and hopefully lasting) repentance from my ambition. Maybe one day I will be an influential writer, blogger or pastor. Or maybe I will raise a family in Normal, Illinois and serve God by (begrudgingly, sometimes) loving others more than myself. God doesn’t need me to be a big shot for Jesus; he needs me to be faithful with what he has given me, however big or small. I am constantly learning to trust that good God who has given me everything I have.

Yeah, I’ll probably still be a bit of a hothead and I’ll probably still need to cry when I watch It’s a Wonderful Life but maybe I won’t need to change the world: I will leave that to Jesus. And Whatever God may have for me; I am convinced that it truly is a wonderful life within the graces of God in Christ. 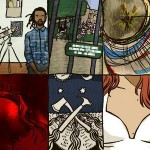 December 26, 2012 Our Favorite Music of 2012
Recent Comments
5 Comments | Leave a Comment
"Radford made a connection between Ender and Hitler.Another possible connection: Could Card have been referring ..."
Raymond Z ‘Ender’s Game,’ Genocide, and Moral Culpability
"Faith is the confidence that what we hope for will actually happen; it gives us ..."
Smiley M.M. Music Matters: David Bowie, Still Not ..."
""that many of us do not accept that a few cells of human DNA constitute ..."
myintx How I Changed My Mind About ..."
"No thought given to the unborn child whose life was 'silenced and oppressed'... sad."
myintx How I Changed My Mind About ..."
Browse Our Archives
get the latest from
Evangelical
Sign up for our newsletter
POPULAR AT PATHEOS Evangelical
1