One of the latest fads to cross the pond from England to America is Downton Abbey, the brainchild of Gosford Park creator Sir Julian Fellowes.  The show, whose third season premiered for American audiences this month, follows the affairs of the British aristocratic Crawley family, while also keeping up with the lives of their various paid servants “downstairs.”  The first season began with the sinking of the Titanic in 1912, but the show has already reached 1920 by now, meaning that it spans a transitional time in English history, not only encapsulating the epochal events of World War I, but also political and social upheavals in the roles of women, Irish citizens, and, perhaps most relevantly for the series, paid servants.  The question has already been raised about whether or not the role of the church should be expanded in the series.  On a deeper level, however, I think that a particular way the show may resonate for the Christian viewer is in its overall portrayal of the nature of servanthood.

By its very nature, Downton Abbey is in many ways about servants.  But it is even more fundamentally about what it means to serve…and to be served.  Take, for instance, the role of Carson the butler (played by Jim Carter), who presides with dignity over the other downstairs workers of the estate.  Carson’s unfailing loyalty to the Crawley family, his personal code of decorum, and the standards he sets among the other servants make him seem something of a stick-in-the-mud at times, yet it is hard not to admire his devotion to these ideals of servanthood.  And when in the first season he was confronted with a threat to his own hard-earned dignity, it is his employer, Robert, Earl of Grantham (Hugh Bonneville), who serves him by keeping him from being blackmailed.

Carson, whose responsibilities represent a point of pride for him, is ill-at-ease to find his lord serving him.  But this points to a reciprocal theme in the series: accepting service with grace.  In the first season, the heir apparent of Downton, Matthew Crawley (Dan Stevens), initially rebuffs his valet Molesley’s (Kevin Doyle) attempts at service, only to realize that in doing so, he has actually demeaned the value of the man’s work.  In season three, Matthew has begun to communicate these lessons to Branson (Allen Leech), a former chauffeur of Downton who is now a member of the family.  Indeed, many characters must learn a lesson that may be particularly difficult for American Christians: the necessity of accepting the service of others.  In John 13, Jesus, the Lord of Creation incarnate, stoops to wash the feet of his disciples.  Peter, however, reacts vehemently against this action, declaring, “You shall never wash my feet” (verse 8, ESV).  Yet after being rebuked by Jesus, Peter willingly allows his master to serve him.  Shortly thereafter, Jesus states, “If I then, your Lord and Teacher, have washed your feet, you also ought to wash one another’s feet” (verse 14).  We are rightly accustomed to reading this passage as a charge to serve others; but as with Jesus’s own action, every communal act of service requires that another member of the community therefore be the one served.

Perhaps no character in Downton Abbey more embodies how these tensions may be effectively balanced than John Bates (Brendan Coyle), who from the beginning of the show has walked this tightrope of serving and being served.  Time and again he finds himself reliant on others: first on the Earl of Grantham, his former fellow soldier who gives him a job at Downton despite questions regarding his ability to perform his duties; and now on his wife Anna (Joanne Froggatt), as she tirelessly seeks to prove him innocent of a murder.  When given the opportunity, Mr. Bates serves faithfully in his own capacities and stands against those who would abuse their positions, but when placed in vulnerable situations, he is able to receive the service of others as the acts of love they are.  In this, he plays out the challenging dynamic of the Christian life, that at times we will be washing the feet of others, but at times, we must expose our own feet to let them be washed. 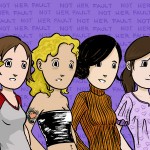 January 16, 2013 This Should Go Without Saying: Stop Blaming Rape on Women
Recent Comments
4 Comments | Leave a Comment
"Radford made a connection between Ender and Hitler.Another possible connection: Could Card have been referring ..."
Raymond Z ‘Ender’s Game,’ Genocide, and Moral Culpability
"Faith is the confidence that what we hope for will actually happen; it gives us ..."
Smiley M.M. Music Matters: David Bowie, Still Not ..."
""that many of us do not accept that a few cells of human DNA constitute ..."
myintx How I Changed My Mind About ..."
"No thought given to the unborn child whose life was 'silenced and oppressed'... sad."
myintx How I Changed My Mind About ..."
Browse Our Archives
Related posts from Christ and Pop Culture