In Which Jodie Foster Feels All The Things

Sunday night I watched the Golden Globes. I could tell I was in a fragile place of life, because I got in my pajamas, grabbed a bag of M&Ms, and for several hours, watched a bunch of celebrities pretend to be shy and grateful and embarrassed to be awarded for their work. I could tell that I was trying to escape some very pressing realities, because I ate up every minute of it, every awkward close-up, every sore loser pout, every fake tear and quavery voice. I felt a certain sense of solidarity when people who have been snubbed by the mainstream won their awards (Ben Affleck, Lena Dunham), like they were somehow on my “underdog” team. I was glued to the screen, to the countless dramas being enacted before me.

Perhaps none was so impactful as the glorious train wreck that was Jodie Foster’s acceptance speech for the Cecil B. Demille award. I was part horrified, part exhilarated by how live and unedited it was, six minutes of her time to say… whatever it was that she wanted to say. (She told reporters afterward that her speech “spoke for itself”, but the general consensus was that America was confused at best). The entire speech (which you can either watch or read the transcript of here) has already been analyzed in a myriad of ways, people looking for what they want in it. Whatever you make of it, it certainly wasn’t typical. It wasn’t a coming-out party, a rant about privacy and celebrity culture, or a celebration of all the behind-the-scenes people that make the golden globes work. It was simply a woman accepting her award from the industry that has caused her much joy and pain; it was like looking into the mirror of the Hollywood machine, and seeing the kind of fragility it can produce.

The mirror was held up to me, as well. I watched the Golden Globes, mentally rating the dresses and comedy routines. I loved the glittering dresses and the fumbled missteps all the same. I wanted to be entertained, to forget my troubles, to live vicariously through the emotion of other people.

I watched people cry as they listened to Ms. Foster’s speech. And although I could hardly understand it myself, I got teary as well. She was being honest with us, she rambled just like any one of us would have. She gave us a glimpse of the pain and the pride, of 47 years of giving your life to something that rewards you with a fake gold statue, an industry that demands you show up in a sparkly dress in order to receive it.

It was by far the best moment of the night, the rare glimpse behind the curtain. And after it was over, I no longer felt the need to keep watching. I knew it was time for me to turn off the TV, to get on with the business of dealing with real life. Of the countless little dramas and comedies, the roles I glide in and out of, the expectations and assumptions we all encounter in different ways. But most of all it was time to confront what Ms. Foster was talking about, the desire we all have innate within us: “to be seen, to be understood, deeply, to not be so very lonely”.

I couldn’t have said it better myself. 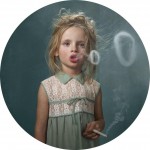 January 15, 2013
The Kiddy Pool: Childhood Innocence Up in Smoke
Next Post

January 15, 2013 The New Androgyny
Recent Comments
2 Comments | Leave a Comment
Browse Our Archives
get the latest from
Evangelical
Sign up for our newsletter
POPULAR AT PATHEOS Evangelical
1