Carolina Chocolate Drops: A Reminder That Nothing Is Black and White

Carolina Chocolate Drops: A Reminder That Nothing Is Black and White February 15, 2013 Nick Rynerson

American Music has never, ever, ever had a racial monopoly. Even though in the last few decades the media has reinforced the idea that Rap is “Black music” and Country is “White music”. Not too many folks would come right out and say that (“What about Emeniem and Darius Rucker?!” They might say…), but it’s a signature American unspoken norm.

However, nothing could be farther from the truth. “White” Rock & Roll would be nonexistent without the Blues and the amazing African American musicians of the 20’s, 30’s and 40’s would have toiled in obscurity were in not for the likes of Harry Smith and W.C. Handy. American music has always been a racially interactive dance.

Today, this dance is displayed with excellence in the music of the Carolina Chocolate Drops. This African American quintet consisting of an incredible banjo player, a guitar player, a fiddle player with great pipes and a singer/beat boxer is taking folk music into largely uncharted waters: contemporary Black Culture. The combination of acoustic old-time instrumentation, both old-timey & hip-hop sensibilities and deep roots reminds us why we need racial dialogue and collaboration.

The White Church and the Black Church (I am sad there is still such a division) could learn a lot from the daring of The Carolina Chocolate Drops’ willingness to adopt, adapt, and embrace a barrage of racial cultures for the good of all involved. I hope to see that day, and in the mean time I am encouraged by great music like this.

Seriously, if this doesn’t rock your world… 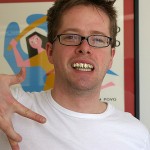 February 15, 2013 The Shocking Fall of Oscar Pistorius
Recent Comments
7 Comments | Leave a Comment
Browse Our Archives
get the latest from
Evangelical
Sign up for our newsletter
POPULAR AT PATHEOS Evangelical
1