Every Song I Ever Wrote Was Written for You: Belle and Sebastian

Every Song I Ever Wrote Was Written for You: Belle and Sebastian February 27, 2013 Amy Lepine Peterson

Last week Pitchfork.tv released an hour-long documentary about the making of Belle and Sebastian’s beloved album If You’re Feeling Sinister. The documentary is the latest in their Pitchfork Classic series looking behind the scenes at notable albums.

The documentary is well worth your time, if you’re a music lover, but even if you’re not, you’ll appreciate watching the way that silence, community, and artistic expression worked together to nurture healing and create beauty in lead singer Stuart Murdoch’s life. Let me explain.

At the age of 21, Murdoch was diagnosed with myalgic encephalomyelitis, or Chronic Fatigue Syndrome. He dropped out of college and moved in with his parents. In the mornings, he would eat breakfast, play piano for as long as he could, and then rest. For the better part of seven years, he struggled with this debilitating illness; yet he credits those isolating years with forming him into the songwriter he is today.

In 1995, Murdoch moved to Glasgow. Still weak and unable to find a job, he joined a government program, “beat box,” for the unemployed. According to the documentary, the government “gathered up all the waifs and strays from the town, and said, ok, you’re on a music course now.” Murdoch likened “beat box” to a “refugee camp for unemployed musicians.” The unemployed received welfare aid in return for “taking a course” and practicing music together. Once a month, they could use a recording studio too. Though at first he was too fatigued to play more than two or three songs at a time, the beat box program gave Murdoch a place to practice, to connect with future bandmates, and to survive.

After creating Tigermilk, the first Belle and Sebastian album, Murdoch moved into a bachelor flat above a church, working as the caretaker for their parish hall, and singing in the choir. While there, he and his bandmates recorded the album If You’re Feeling Sinister, which is widely regarded today as one of the best albums of the nineties.

It’s no coincidence that Murdoch was working for a church, or that a number of his songs feature religious themes. In 2004, he told The Guardian that in regard to faith, he is “still asking questions.”

“But,” he continued, “I had this time when I found myself singing all these old hymns in my kitchen and I couldn’t work out why I was doing it. Then one Sunday morning I got up, looked at my watch, and thought, ‘I wonder if I could make it to a church service?’ It was so welcoming. It just felt like you were coming home. Twelve years later, I’ve never left.”

What is fascinating to me about Murdoch’s story is the way that these various elements combined to produce a beautiful work of art. His illness and isolation emptied him out, creating space for art to emerge. Then playing music—practicing his art—was in many ways what restored him to health. As bass player Stuart David says, “If You’re Feeling Sinister was a culmination of him getting better…getting better through creating.” Yet without the support of his community—politically, religiously, and personally—this beautiful album might never have been created.

It makes me wonder what gems might emerge if we, too, are open to silence, practicing our disciplines, and supported by our communities. It makes me marvel at how music—ancient hymns—can emerge from the depths of memory and move us back to God. Maybe we should keep playing those hymns; and maybe it wouldn’t hurt to try opening our churches to unemployed musicians every now and then.

Silence, discipline, and community: each can provide healing and beauty, a truth demonstrated gorgeously on If You’re Feeling Sinister. 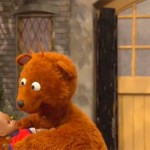 February 27, 2013
Leave Baby Bear and His Doll Alone
Next Post

February 28, 2013 Bravo’s Top Chef and the Likability of Artists
Recent Comments
4 Comments | Leave a Comment
Browse Our Archives
get the latest from
Evangelical
Sign up for our newsletter
POPULAR AT PATHEOS Evangelical
1