You have probably already heard of the imbroglio created when Tim Tebow backed out of an Easter speaking engagement at the First Baptist Church of Dallas. When I saw the original announcement that Tebow made on Twitter, I knew immediately that it was going to be a big deal. FBC Dallas is one of the flagship churches of the Southern Baptist Convention, and SBC represents one of the denominations where Tim Tebow is held up as a shining example of what a Christian should be.

But Tim Tebow stood them up.

A short time ago, Pastor Louie Giglio withdrew from praying at the Presidential Inauguration after an outcry over a sermon he preached in the mid 90’s outlining homosexual sex as sin. Now, Tebow has cancelled an engagement at FBC Dallas after there were protests over this same teaching. Have we reached a place in our culture where believing that homosexual sex is sin, and therefore opposing homosexual marriage, is on the same level as being a racist? A bigot?

If it is the case that the protest over the views at FBC Dallas and the sermon of Louie Giglio are issues of substance and not merely style, then nuance will not help the Christian move forward with conversation. The church has to realize that no matter how nicely she tries to say, “This sexual behavior is sin”, people will be offended. So is there any way that the church can say those things without being marginalized culturally? Perhaps, but it will take some wisdom. Here are a few things that we could do for starters.

1) Stop making a big deal out of celebrity Christians. As far as I know, Tim Tebow is not an elder or teacher in any church, and I don’t think he has any sort of theological education beyond his upbringing and personal study. That is not to say he is ignorant. He may very well be educated in theology beyond many pastors. My point is that he is a Christian and a football player, not a pastor theologian. It would be wise if we would stop thrusting celebrities into arenas to speak for the church.

2) Be more consistent in the way we talk about sexual immorality. It is very difficult for a gay person to take hearing about how ‘sinful’ his sex life is when he knows that Christians sleep around and get divorced as much as anyone else. It is a glaring hypocrisy. I am not suggesting that the church can somehow prevent such dalliances from ‘straight’ members, but at the very least, we ought to act like it bothers us just as much. If the church would simply talk about sexual immorality as a blanket category of ‘anything outside of one-man, one-woman covenant’, at least the gay community wouldn’t feel singled out by the church.

3) Many view this issue as the civil rights issue of our day – we ought not respond to that with outrage and dismay. Anyone who holds to the traditional Christian teaching on the matter of sexual immorality is going to be viewed by many as a bigot, and may be reviled as if they were a racist. The church has to be able to respond to that graciously. Above all, we cannot act the part. Despite what is said, holding to a Biblical ethic of sexuality is not bigotry, and the church needs to remain confident of that in the face of strong objection. That is the only way to remain gracious in the midst of a trying circumstance.

February 28, 2013
Bravo’s Top Chef and the Likability of Artists
Next Post 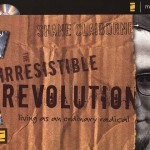 March 1, 2013 Notes from the Margins: Swords into Plowshares, AK-47s into Shovels
Recent Comments
32 Comments | Leave a Comment
"Radford made a connection between Ender and Hitler.Another possible connection: Could Card have been referring ..."
Raymond Z ‘Ender’s Game,’ Genocide, and Moral Culpability
"Faith is the confidence that what we hope for will actually happen; it gives us ..."
Smiley M.M. Music Matters: David Bowie, Still Not ..."
""that many of us do not accept that a few cells of human DNA constitute ..."
myintx How I Changed My Mind About ..."
"No thought given to the unborn child whose life was 'silenced and oppressed'... sad."
myintx How I Changed My Mind About ..."
Browse Our Archives
get the latest from
Evangelical
Sign up for our newsletter
POPULAR AT PATHEOS Evangelical
1