Notes from the Margins: The Mindy Project–A Once in a Decade Opportunity

The show Girls gets a whole lot of attention in the media world. Lena Dunheim, hailed for her emotional honesty and clear-headedness when it comes to body image, is at the top of the pack of in-demand writers and performers. Critically acclaimed and successful, Dunheim has hit the jackpot. She is funny, unapologetic, driven, and smart. Lena Dunheim is one of a kind. Or is she?

There is another girl on the scene, one who hasn’t quite gotten as much critical acclaim. Mindy Kaling, whose new series (which she writes, directs, and stars in) has found moderate success in a broader network market, with much less hype and fuss than Dunheim and her crew.

In fact, of the few articles in which The Mindy Project was mentioned in The New York Times, two of those were about weight (“Women on TV Step Off the Scale” and—I am not making this up—a slideshow entitled “Proud and Plump”) and one was about her male co-star.

Lack of (good) attention or not, The Mindy Project is one of the few shows on television that I currently watch. I think it’s funny, whip smart (check out the latest episode—”My Cool Christian Boyfriend”—for some biting satire on both church services and short term missions) and I think it is groundbreaking in a few areas. Mainly, that a woman of color is driving force of the show, and that her race is hardly mentioned at all.

The Mindy Project is not a show about race, gender, or cultural perceptions of beauty. But it smartly points out all of our current hang-ups with all of those issues by neatly side-stepping them. The fact that Mindy is ethnically Indian is barely mentioned, choosing instead to focus on her relatability as a working woman, a friend, and someone on a quest to live out her own romantic comedy. Her weight, which by Hollywood standards is something of a radical act, is brushed off with a joke in the first episode (in which her co-worker declares that she could stand to lose 15 pounds, to which she retorts that at least she wasn’t divorced like him). And her gender is just a fact of who she is, never the butt of the joke or an excuse for irrationality or an overload of “adorkability” (New Girl, I’m looking at you).

In many ways, The Mindy Project is not so remarkable. It’s a standard ensemble comedy that very often is funny, although there are a few jokes every episode that land with a thud. There is a love interest with a will-they-won’t-they-vibe. The characters are likable, fresh, and well-thought out. It’s a show about a girl and her life—her work, her friends, and her hopes.

But in other ways, it is in uncharted territory. That it is the first TV show since 2003 (ten years, people!) in which a woman of color writes and stars in her own sitcom should tell us something. It should tell us that there is a serious dearth of non-white and non-male perspectives in positions of power and visibility in television today; and it should tell us that we are missing out on some tremendous material.

Mindy Kaling is poised to change that, just by being true to who she is. While shows in recent years have addressed issues of gender (Girls) and weight (Drop Dead Gorgeous), race has been a trickier topic. While people laud Tina Fey and 30 Rock for their take on the “last taboo topic”, I can’t help but think how much better the jokes would have been if they had been written by Tracy Morgan himself. The Mindy Project, while not perfect, succeeds precisely in this area because Kaling is the one writing the jokes. She gives us a full, nuanced portrayal of everything that makes her who she is—and what she finds funny. She is the perfect person to present her show to us: she knows exactly what she is doing, and she smartly trades cheap jokes for good ones that stick—making fun of hipster Christians, clubbing culture, and midwives—all the while refusing to pander to stereotypes.

Since Kaling is the person in power, her show feels different. This really shouldn’t be so groundbreaking, nor should it even have to be pointed out. But since this is turning out to be a once-in-a-decade thing, it bears mentioning. Let’s see more people like Mindy Kaling behind the camera (and in front!). Let’s see what we are missing, and laugh ourselves silly doing it.

April 4, 2013
The Moviegoer: Terrence Malick's "To the Wonder" and Psalmic Yearning
Next Post 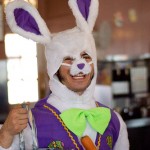 April 5, 2013 Frequently Searched Questions: Chick-Fil-A Dissertation Topics
Recent Comments
4 Comments | Leave a Comment
"Radford made a connection between Ender and Hitler.Another possible connection: Could Card have been referring ..."
Raymond Z ‘Ender’s Game,’ Genocide, and Moral Culpability
"Faith is the confidence that what we hope for will actually happen; it gives us ..."
Smiley E.E. Music Matters: David Bowie, Still Not ..."
""that many of us do not accept that a few cells of human DNA constitute ..."
myintx How I Changed My Mind About ..."
"No thought given to the unborn child whose life was 'silenced and oppressed'... sad."
myintx How I Changed My Mind About ..."
Browse Our Archives
get the latest from
Evangelical
Sign up for our newsletter
POPULAR AT PATHEOS Evangelical
1

A List of Sins from the...
Christian Crier
Related posts from Christ and Pop Culture