If you have been swept up in all the news with the recent Supreme Court rulings on marriage, you probably have not heard about a significant event that happened in Texas. Around midnight on Tuesday night, after an 11 hour filibuster, the Texas special legislative session ended and with it a pro-life omnibus bill called SB5.

There is much misinformation about what the bill actually does but, in essence, it comprised four parts. One part of SB5 would have banned abortion at 20 weeks, when some argue that unborn children are sufficiently developed to feel pain. A second part would raise the standards of care in abortion facilities to meet that of other surgical centers. The third part required that abortion doctors have admitting privileges to a local hospital (so patients can receive aftercare). And a final provision would have regulated the usage of the RU-486 abortion drug to follow FDA guidelines.

Of course, as you can imagine, the impetus driving at least some of this push by legislators to standardize and regulate abortion care was the recent trial in Philadelphia of Kermit Gosnell, who was convicted of murder and sentenced to life in prison for the infamous “snipping” of viable babies. Closer to home, in Houston, Texas, abortionist Douglas Karpen is under investigation for illegal and particularly gruesome late-term abortion procedures.

Without going into all of the procedural issues surrounding the bill, pro-choice legislators in the Texas Senate—with the assistance of a vocal and (literally) roaring crowd—successfully managed to kill SB5 by preventing the legislators from voting before the midnight special session deadline. It suffices to say that this was one of the most significant pieces of pro-life legislation ever proposed in the State of Texas.

Over all, it was a sad night for Texas. What transpired reflected poorly upon our legislature and our citizens. And it just adds to an increasing litany of instances where proper public discourse has been ignored at the expense of politics.

What can we do? We, as Christians, do have a particularly high responsibility to others. And that is to bring Christ’s redeeming Gospel to a hurting and broken humanity. Spreading the good news, the evangelion, is the mission of the Church. Included within that call are the ways in which we discourse with others.

Our God is a God of order. He is not chaos. Out of nothing—ex nihilo—He created the entirety of the cosmos. The ordering of the universe is both complex and understandable. God communicates himself to us in the birds of the air, the flowers of the field, and the cool gentle breeze. God wants to be known and to know us. Indeed, He “knows us more than we know ourselves.” What happened in Texas was anything but orderly or seeking to know and be known. Shouting someone down. Refusing to hear them. Shutting out debate. That is the very breaking of communion. It is to shut someone out of your life. And that wreaks a violence upon the soul unlike any other.

The pro-life community is often criticized for only caring about the unborn and doing nothing for babies once they’re born. Aside from the existence of various ministries, pregnancy resource centers, and para-church organizations that actually do a lot of great work, it is true that we can always do better to care for the whole person, from birth to death. Although Christians can validly disagree on the specific aspects of SB5, we can learn at least three lessons from this experience about what authentic dialogue should look like.

First, there was a loss of respect for the Other. Christian reverence was sorely lacking. We must recognize the dignity of the other person, that these are created in the image of God, before we are able to give them what is their due. Now, this does not mean kowtowing to our government, especially with respect to unjust laws, but it does mean showing our fellow citizens an appropriate way to relate to those put in charge over us. With reference to giving our leaders what they are due, St. Paul shows us one way: “I urge that supplications, prayers, intercessions, and thanksgivings be made for everyone, for kings and all who are in high positions, so that we may lead a quiet and peaceable life in all godliness and dignity. This is right and is acceptable in the sight of God our Savior, who desires everyone to be saved and to come to the knowledge of the truth.”

Second, we have to recognize that this is not merely a binary recognition of one person to another but also encompasses a greater communal dimension. The very life of God in Trinity mirrors what true communion looks like. That is, the unity of the Father, and the Son, and the Holy Spirit overflows so bountifully that God invites the rest of creation to join Him. Pope Francis recently spoke of this aspect in context of the Church:

The Church is born from the desire of God to call all people into communion with Him, to His friendship, and indeed, as His children, to partake of His own divine life. The very word ‘Church’, from the Greek ekklesia, means ‘convocation’. God calls us, urges us to escape from individualism, [from] the tendency to withdraw into ourselves, and calls us—convokes us—to be a part of His family.

It is often tempting, especially with an issue like abortion, to be mired in our own worldviews without ever giving a second thought to the voice of another. We must resist the call to dehumanize the other side to a mere mob, or reduce their communications to a cheap talking point. That helps no one and does not establish communion. Instead, we must be willing to respond charitably to those who support abortion. It is much harder to hate someone who shows you love. We must see into their lives the situations that give rise to a need for abortion. We must share of ourselves and our goods even when it hurts. That does not mean we come to agree on everything, but it does mean that when we are both open to each other that the path to journeying towards truth together can begin.

Finally, what does this journey look like? As I alluded to in the previous paragraph, it must be ordered to truth. Too often today, we are afraid of the word truth. To claim “truth” means that I must exclude another or that they are totally wrong. But that is a mischaracterization of truth. St. Augustine said it best once in that we do not possess the truth, but we are possessed by it. We must not be afraid of truth. Love, defined as willing the good of the other person, needs truth. Without truth, it ceases to be love proper because it seeks something lesser, more diminished, and ultimately unsatisfying. Without truth, there is no communion. We can see the truth of love embedded within our very bodies. That new life can be created between the loving embrace between a man and a woman, how wonderful that is! Regardless of how much sex is trivialized or commercialized, the truth of that cannot be stamped away indefinitely. It remains. Life is a good thing. Even many arguments for abortion are based upon the future quality of life of the child, or the mother, or some other good. No one (usually) seeks an abortion for its own sake.

Through abortion, the natural Mother-Father-Child dynamic is parodied in a pure exercise of power by one party or another. That most intimate of relationships, which should be one of maternal care, childlike love, or fatherly protection, becomes a zero-sum game where one party must gain at another’s loss. That mentality has contributed to poverty of our modern discourse today. The choices seem stark because our culture has learned to solve its problems through sheer power, rather than through love in truth and truth in love.

There was a lot of anger in that room. There was a lot of brokenness. And there was a lot of pain. None of that came out of thin air. Each and everyone of those persons has a soul, an eternal origin, and was called to be in communion, to be forever blessed with God in heaven. The political debates, yes, are quite important and not irrelevant. But if Christians are to provide a third way, an example to this world, then that call, that invitation, to communion is where we must begin.

Rachana Chhin is a 23 year-old from Houston, Texas. He received his Bachelors in International Studies at Baylor University in Waco, Texas and is currently pursuing both a Juris Doctorate and Masters in Catholic Studies at the University of St. Thomas in Minnesota. 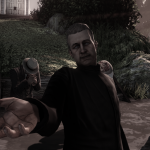 June 27, 2013
Booker DeWitt’s Shotgun Baptism and the Tragedy of Cheap Grace in Bioshock Infinite
Next Post

June 27, 2013 Silver Linings in DOMA Case?
Recent Comments
0 | Leave a Comment
"Radford made a connection between Ender and Hitler.Another possible connection: Could Card have been referring ..."
Raymond Z ‘Ender’s Game,’ Genocide, and Moral Culpability
"Faith is the confidence that what we hope for will actually happen; it gives us ..."
Smiley M.M. Music Matters: David Bowie, Still Not ..."
""that many of us do not accept that a few cells of human DNA constitute ..."
myintx How I Changed My Mind About ..."
"No thought given to the unborn child whose life was 'silenced and oppressed'... sad."
myintx How I Changed My Mind About ..."
Browse Our Archives
get the latest from
Evangelical
Sign up for our newsletter
POPULAR AT PATHEOS Evangelical
1