On July 4th, Celebrate America, But Don’t Worship It

On July 4th, Americans will wave our flags proudly, belt out our national songs triumphantly, and consume our barbecue and lemonade a little too freely. Why? Because we live in America, the best nation this planet has had the privilege to host. I’m grateful to be an American, and I enjoy the many freedoms and benefits that come with my citizenship. Nonetheless, our nation’s history has a track record for taking patriotism beyond gratitude and into nationalist idolatry. Many Americans through the years have harvested a superiority complex—a mentality and posture that has been harmful to our country and others. Patting our backs for our supreme eminence is not how we should be celebrating this holiday.

The belief that a nation singularly surpasses the standard and therefore must lead the world in politics, economics, culture, morality etc. is called exceptionalism. In our country, this mindset extends all the way back to our early settlers: the Puritans. You think America has got it great today? You should’ve seen it 400 years ago. It was paradise—no King, no Catholics, no Anglicans, no Baptists, and almost no sinners.

In 1630, John Winthrop (1588-1649), a Cambridge educated Puritan, led 700 intrepid souls across the Atlantic on the Arabella in hopes of establishing a “city set on a hill.” Winthrop became the governor of the Massachusetts Bay Colony, where he enforced standards of holiness on all the citizens. They left England in order to escape the worsening morals in government, the church, and society and lead righteous lives for the world to observe and imitate. Winthrop voices this mission in a tract he wrote on board the ship titled, “A Model of Christian Charity”:

For we must consider that we shall be as a city upon a hill. The eyes of all people are upon us. So that if we shall deal falsely with our God in this work we have undertaken, and so cause Him to withdraw His present help from us, we shall be made a story and a by-word through the world.

In other words: “No pressure guys, but you better not ruin this opportunity to maintain an angelic society that will save the world by its example.” If Winthrop were here today to see how his American project turned out, would he consider it a success? Not likely. He would probably gather another saintly cohort and set up a holy utopia elsewhere for modern day America to observe and emulate.

I sympathize with how serious Winthrop took his holiness before God and his genuine good will for others, desiring “to improve our lives to do more service to the Lord . . . that ourselves and posterity may be the better preserved from the common corruptions of this evil world.” However, even though his aim in separating from the corruptions of society was honorable, it was sorely misguided. As historian Edmund S. Morgan has pointed out, Winthrop failed to reconcile his exceptionalism with a central Puritan belief: original sin. As long as humans shape societies, there will be corruption, hurt, and moral failure. No human or society can claim inherent superiority over others, not even America .

Well, on that gloomy note, have a great Fourth of July!

Seriously, enjoy the holiday and celebrate all the great things that America stands for. But also take some time to reflect on the common humanity that we share with the rest of the world, and remember that we are no better than anyone else. The goal of the world is not to become like the America of today or of 400 years ago, but to be recreated anew into the Kingdom of God where true liberty and righteousness reign forever. 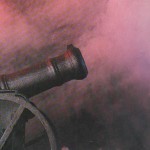 July 3, 2013 Independence Day Staple, the "1812 Overture" is a Story of God's Sovereignty Over Human History
Recent Comments
0 | Leave a Comment
"Radford made a connection between Ender and Hitler.Another possible connection: Could Card have been referring ..."
Raymond Z ‘Ender’s Game,’ Genocide, and Moral Culpability
"Faith is the confidence that what we hope for will actually happen; it gives us ..."
Smiley M.M. Music Matters: David Bowie, Still Not ..."
""that many of us do not accept that a few cells of human DNA constitute ..."
myintx How I Changed My Mind About ..."
"No thought given to the unborn child whose life was 'silenced and oppressed'... sad."
myintx How I Changed My Mind About ..."
Browse Our Archives
get the latest from
Evangelical
Sign up for our newsletter
POPULAR AT PATHEOS Evangelical
1

Are Men Human Podcast and Links
It is vaguely warmer here this morning, and I guess that means...
view all Evangelical blogs
What Are Your Thoughts?leave a comment
Copyright 2008-2020, Patheos. All rights reserved.