Tony Soprano: The Line Between Good and Evil

By now most of us have heard that James Gandolfini passed away on June 19. The American actor, best known for his much acclaimed lead role in HBO’s The Sopranos, was vacationing in Rome with his family when he died unexpectedly of a heart attack, aged just 51.

Gandolfini was, of course, many things besides an actor, and it would be unfair to reduce him to his body of work or his public persona. He was a husband, a father, and a friend, and the outpouring of love and grief at his death suggests just how beloved a man he was. As an actor, however, his enduring legacy will always be Tony Soprano, a role he embodied as completely and naturally as perhaps anyone ever has. There tends to be a spate of hyperbole after anyone passes away, but anyone who has seen The Sopranos will recognize that Gandolfini as Tony Soprano was something special. Sopranos creator David Chase’s statement via E! News in the aftermath of Gandolfini’s death was to the point. “He was a genius,” Chase said. “Anyone who saw him even in the smallest of his performances knows that. He is one of the greatest actors of this or any time. A great deal of that genius resided in those sad eyes. I remember telling him many times, ‘You don’t get it. You’re like Mozart.’ There would be silence at the other end of the phone.”

It was a role few actors could have pulled off. The show made a point to portray Tony Soprano as the Everyman, someone we could all empathize with: someone with kids he struggled to relate to, with a troubled marriage, weighed down by work stress, prone to depression—the prototypical modern man. He was also, of course, a mob boss, and deeply volatile and violent. Thus the range of emotions Gandolfini portrayed on a weekly basis, and portrayed with immense human feeling and charisma, was truly staggering. Few more complicated characters have ever been rendered on television, and HBO’s foray into a comparatively new medium—the extended television drama—gave Gandolfini an unprecedentedly large canvas on which to work. Chase’s analogy to Mozart is apropos—so much of Gandolfini’s gift was unconscious, unlearned, unmerited. His immense physicality, twinned with his disarming mischievousness, played directly into the show’s basic premise: that a New Jersey mobster could be someone much like you and me.

Tony Soprano inherited a place in the world that drove him to increasingly inhuman places, and as we watched we were torn between self-righteous disgust and empathy. We were never allowed to simply gawk, voyeuristically, at a wicked man doing wicked things. If that had been the show’s main appeal, it would never have reached the heights it did. Instead, thanks to Gandolfini’s nuanced performance, we were continually obliged to recognize ourselves in Tony’s humanness: his charm and playfulness, his self-pity, his guilt, and his complex motivations. The Sopranos never permitted us for a moment the comfortable dichotomy between good and evil.

If it was about any one thing, The Sopranos was about the ways sin permeates a man’s heart, and then works outward from his own heart to contaminate everything around him. Tony’s choices were never simple, and as we watched they were perfectly understandable (if not usually justifiable) given the context. Tony’s father was a mob boss, and his moral universe was forged in a very different set of circumstances than yours and mine. The show spent time developing Tony’s conflicted relationship with his parents, particularly his mother, whose self-serving manipulations fueled much of Tony’s angst. Thus his choices both conditioned and were conditioned by his circumstances. But wherever we draw that line, there can be no doubt that Tony’s choices wrought devastating effects on everyone who came in contact with him. There were literally no characters on the show that were not affected, if not completely destroyed, by his poisonous influence, and the closer they were to Tony, the more ruinous the repercussions. He drove business associates—even close friends—over the brink of financial ruin without a thought. He cheated on his wife relentlessly and (mostly) without remorse. He murdered even those closest to him to suit his needs. And through it all reverberated the psychological pain and heartbreak of those he had hurt, and perhaps even more, those he drove to violate their own consciences.

Gandolfini had a case full of awards for his performance on The Sopranos, including an Emmy, a Golden Globe, two Screen Actor’s Guild Awards, and awards from the Television Critics Association and American Film Institute. All these befit the enduring legacy he created. His work on The Sopranos (alongside Chase and others) blazed a trail for the great serial television programs that would follow. But more than that, more than its immediate contextual significance as a genre-bender, a groundbreaking demonstration of what television could do, The Sopranos was, and remains, great art. It was about those universal verities, good and evil, and it was brave enough to differentiate between them. It was this fundamental honesty on the part of David Chase and the shows’ other writers that made it truly transcendent as television and as art. They recognized that, as Alexander Solzhenitsyn put it, “the line between good and evil cuts through the heart of every man.” And rarely, if ever, has an actor rendered that line so masterfully.

Ethan McCarthy is a writer living in Highwood, Illinois with his wife Jenni and their two children. They like literature, music and listening to the Atlanta Braves on the radio. He currently works in an elementary school special education classroom.

August 7, 2013
ELSEWHERE: Pacific Rim and the Immensity of God
Next Post 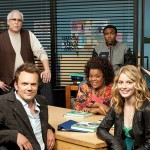 August 8, 2013 Sin in Syndication: Breaking the 'Community' Spirit
Recent Comments
0 | Leave a Comment
"Radford made a connection between Ender and Hitler.Another possible connection: Could Card have been referring ..."
Raymond Z ‘Ender’s Game,’ Genocide, and Moral Culpability
"Faith is the confidence that what we hope for will actually happen; it gives us ..."
Smiley M.M. Music Matters: David Bowie, Still Not ..."
""that many of us do not accept that a few cells of human DNA constitute ..."
myintx How I Changed My Mind About ..."
"No thought given to the unborn child whose life was 'silenced and oppressed'... sad."
myintx How I Changed My Mind About ..."
Browse Our Archives
get the latest from
Evangelical
Sign up for our newsletter
POPULAR AT PATHEOS Evangelical
1