When It Comes to Mainstream Media, Hate the Sin, Not the Sinner

When It Comes to Mainstream Media, Hate the Sin, Not the Sinner August 1, 2013 Guest Contributor

My endearingly small home state of Rhode Island only supports one statewide newspaper. With the digital uprising of blogs and backpack journalism, The Providence Journal is dying a painfully slow death with little redemption in its future. Should the local church notice or care?

After all, aside from Fox News’ faithful following in the Bible belt, there is a clear war between the Christian community and the national news media. Although the occasional skewering of evangelicals in mainstream media may never subside, there is less reason than we may believe for Christians to chronically berate the media either.

In some ways, Christians should respect mainstream media’s purpose of pursuing and exposing truth. We should utilize it to be informed citizens prepared to engage the world, and look for glimmers of hope amidst its brokenness.

Leaders like Bill Clinton and Richard Nixon will always exist with secrets to hide or cover up, and without the media to expose them, their deeds will remain hidden. In less just nations, there will always be a Joseph Kony and his Lord’s Resistance Army abusing innocent citizens. But without the media, how would the church ever know to help?

The most adamant (and accurate) accusations against mass media relate to political bias. Political bias is inherent in many news outlets because it is valued; because so many outlets exist each can collect a specialized audience. Political editorializing is the wave of new journalism. This should not be a problem unless opinion distorts the truth—the hard-cut, nonpartisan facts.

As a media major in New York who has interned with several mainstream news outlets, I personally understand the contradictions and convoluted views of mainstream media. Yet if the church respects the world’s desperate need for truth, it should in some form respect the mainstream media outlets that fulfill Ephesians 5:13 where the church cannot (“But when anything is exposed by the light, it becomes visible”).

Investigative journalism exists to expose the dark side, hold our leaders to accountability, and provide realistic hope when possible.

The case can certainly be made for the lack of media coverage initially with abortion doctor Kermit Gosnell’s slaughter of babies and injury of dozens of women. But if not for Kirsten Powers’ column in USA Today, I along with the general national population may never have heard about his crimes.

In order for the church to help the orphan and widow, loose the bonds of wickedness, and let the oppressed go free (Isaiah 58), we must be aware of the situations in our midst and discern the wisest ways to answer those needs. In my neighborhood, that means following The Daily News on sex trafficking in New York City or The New York Times on the city’s overwhelming homelessness.

Certainly, one of the most difficult things to swallow in accepting the news media is its lack of hope. Some people prefer to be uninformed rather than barraged with natural disasters and political scandals. Yet within the morose headlines there are messages of hope and answers for the downtrodden. We live in a broken world, but it does not mean that we should escape its realities for a more sheltered naïveté.

Whether or not we like mainstream media, we should align with its purpose: truth and accuracy. If we wish to become educated citizens, we cannot bite the hand that feeds us, nor become apathetic to its faults or failings. Let us send agents of hope instead of conceding to defeat. At the very least, we can gratefully use the broken pieces of light the mainstream media offers to help fulfill our Christian callings.

Kara Bettis is a graduating senior at The King’s College in New York City, studying Media, Culture and the Arts. In her little spare time she loves to study theology, write, explore quirky coffee shops, and cliff jump. Andy Crouch’s book, Culture Making, has shaped her views on her calling to be a culture creator before a critic. She has written for World on Campus and World Magazine. Check her out on Twitter @whatakaracter or at her blog http://whatakaracter.wordpress.com 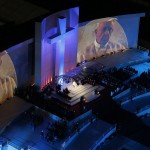 August 1, 2013 Why Was Pope Francis's Statement on Gay Priests Misrepresented?
Recent Comments
0 | Leave a Comment
Browse Our Archives
get the latest from
Evangelical
Sign up for our newsletter
POPULAR AT PATHEOS Evangelical
1

Answering a Question about the Trinity:...
Roger E. Olson
Related posts from Christ and Pop Culture