How Theology Could Make Steven Pinker a Better Scientist

Experimental psychologist Steven Pinker ruffled some feathers recently with an essay in New Republic. In it, he defends a view known as scientism—the belief that science is the most legitimate source of knowledge and that it can explain all of human experience. The essay is postured to be a sort of peace treaty (or “plea,” as Pinker calls it) to ease the tension between scientists and humanities scholars. Instead, many have complained that the essay comes off as scientifically arrogant and condescending to humanities studies in general. It does. Pinker’s article has, thus, been greeted by a chorus of criticism from publications such as NPR, The New York Times, The Guardian, and, most interestingly, New Republic’s very own literary editor, Leon Wieseltier. A common theme throughout this criticism is that Pinker seems blind to his own scientistic hubris.

While I agree with many of his critics, I had a slightly different reaction to the article. I think Pinker has some good things to say, things Christians should think about, and several of his intuitions about science and the world are correct. But he’s led into error when he speaks about science’s relationship to religion. Why? Because he lacks an awareness of theology and the influence it has on science and his own thinking. Ironically, then, the humanities (and specifically religion) could help Pinker be a better scientist. By seeing his own theological and philosophical blind spots, Pinker could avoid making the inaccurate claim that science disproves religion.

First, a couple things he gets right: Pinker correctly states that science is committed to the ideal that the world is intelligible. That is absolutely true. The activity of science presupposes the intelligibility of the universe. But it’s not only scientists who are committed to that idea. Christians should be too. The gospel of John begins with the theologically and philosophically profound statement, “In the beginning was the Logos.” That term carried with it deep philosophical implications. The ancient Greeks used the term Logos to refer to the rational order underlying the universe. Thus, when we read John’s gospel, it is telling us that all things were created by, and through, the Logos—an eternal rationality; namely, God. So, Christians, just as much as scientists (not to mention Christians who are scientists), should be committed to the idea that the universe is intelligible. Since they believe it was created by a rational Intelligence, they would expect nothing less.

Another thing Pinker is correct about is his claim:

[Religious believers] are apt to endorse the partition plan proposed by Stephen Jay Gould…according to which the proper concerns of science and religion belong to “non-overlapping magisteria.” Science gets the empirical universe; religion gets the questions of moral meaning and value.

He goes on to say that this partition plan “unravels as soon as you begin to examine it.” Pinker is right on the money here, as his own example will show in a moment. However, the idea that science and theology belong to non-overlapping domains isn’t false because science disproves religion, as Pinker suggests. It is actually the opposite. Theology encompasses and undergirds science.

Whereas John’s gospel tells us that all things were created by and through the eternal Logos (thereby motivating Christians to expect the universe to be intelligible), Colossians 1 specifies that “all things” means all things, “in heaven and on earth, visible and invisible” (v. 16). That would include invisible things like the laws of nature, laws of logic, ethical truths, aesthetic truths, and so on. They’re all creations of a rational God and reflect His nature in some way. In other words, no truth that can be perceived or learned falls outside the purview of “God’s Truth.”

Christians should, therefore, be as happy as can be with science and the facts it discovers. They should celebrate scientific discoveries as much as atheists. Facts are not a threat to the Christian faith. Rather, they are a confirmation of it. It all reveals God. Indeed, as Paul said, God’s invisible attributes and eternal power are clearly perceived through the things that have been made (Rom. 1:20). That’s why Christians should agree with Pinker that the partition plan proposed by Gould is false, and yet vehemently disagree with him when he says, “The moral worldview of any scientifically literate person…requires a radical break from religious conceptions of meaning and value.” A theologically informed Christian ought to find that statement ignorant as well as absurd.

To see how theology undergirds science, one needn’t look any further than Pinker’s essay. Pinker, at his most audacious moment, says:

[T]he findings of science entail that the belief systems of all the world’s traditional religions and cultures—their theories of the origins of life, humans, and societies—are factually mistaken… We know that the laws governing the physical world (including accidents, disease, and other misfortunes) have no goals that pertain to human well-being. There is no such thing as fate, providence, karma, spells, curses, augury, divine retribution, or answered prayers…

He makes much ado about the laws of nature, in several places. But, sadly, Pinker is blind to the fact that the concept of laws that “govern” the universe is highly theological. As respected physicist Paul Davies complained in The New York Times a few years ago:

[T]he very notion of physical law is a theological one in the first place, a fact that makes many scientists squirm. Isaac Newton first got the idea of absolute, universal, perfect, immutable laws from the Christian doctrine that God created the world and ordered it in a rational way. Christians envisage God as upholding the natural order from beyond the universe, while physicists think of their laws as inhabiting an abstract transcendent realm of perfect mathematical relationships.

Pinker unwittingly uses a historically theological concept (governing laws of nature) to repudiate theology. That’s awkward. Perhaps a greater awareness of the rich tradition of Christian theology and the influence it has had (and still has) on the development of science would do Pinker well. But not only him, Christians too. It could save us from the mistake of partitioning off our faith into a private sphere, where it has no relevance to public knowledge, and it allows the cultural vacuum of belief to be filled by crass scientism. In short, we could all use a little more humanities.

September 4, 2013
ELSEWHERE: Your Life Is Even More Meaningless Than You Thought
Next Post 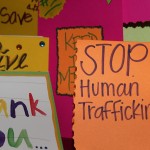 September 5, 2013 The Paradox of Living in the Face of Human Trafficking
Recent Comments
0 | Leave a Comment
Browse Our Archives
get the latest from
Evangelical
Sign up for our newsletter
POPULAR AT PATHEOS Evangelical
1