One such naysayer is Damon Lindelof, who helped take out part of London and San Francisco in Star Trek Into Darkness after destroying the planet Vulcan in Star Trek (and topping it off with most of Earth in World War Z). In an interview at Vulture (partially reprinted at io9), Lindelof somewhat ruefully states that “ultimately I do feel — even as a purveyor of it — slightly turned off by this destruction porn that has emerged and become very bold-faced this past summer. And again, guilty as charged. It’s hard not to do it, especially because a movie, if properly executed, feels like it’s escalating.”

Is there anything intrinsically immoral about big budget action movies featuring large-scale destruction?  I would contend that the answer is “No.”  However, it’s vital that any such movie take great pains to remind its viewers of a simple fact, one that many films basically ignore: Cities are filled with human beings whose lives are significant. This is one of the key points made in Charlie Jane Anders’ tongue-in-cheek but perceptive io9 piece “9 Vital Questions to Ask before Destroying a City in Your Movie.”

A common thread running through her questions is that the best disaster films are the ones that acknowledge the presence and significance of the human populations in the affected cities. This can be done by establishing the escape or safeguarding of the civilian populace (question #6); or, if the attack has come suddenly and there are civilian casualties, filmmakers ought not shy away from acknowledging the human cost (question #7). The heroes should be seeking not only to defeat the enemies but to protect the citizens around them, and perhaps even (if possible) the city itself (question #3).

As Lindelof observes, the Hollywood blockbuster market has been one of escalation; he feels that once a movie budget crosses the $100 million threshold, there is a clear expectation that the stakes will be nothing less than Earth itself. Anders notes that there is nothing inherently problematic about raising the stakes in such movies, but they must be earned (question #8):

There’s a meme going around that movies (and some television shows) have gotten addicted to stakes that are too high. It’s always about saving the world, when sometimes a story about saving a single person or a single small town can be more meaningful. But honestly, there’s nothing wrong with saving the world — it’s what superheroes and space opera heroes do, after all. Everybody loves a story with high stakes, because it’s part of the joy of escapism. The trick is to earn those stakes, by showing us enough people being affected, in enough ways, by whatever is going on. And by explaining why these events are important, in a clear, jargon-free way.

While I believe that most blockbuster movies are more than just escapism, I would tend to agree with Anders that such movies are subject to the same rules and demands as a small-town drama or any other narrative: the conflict is only compelling or meaningful to its viewers if it is about very human crises.

In her essay “The Church and the Fiction Writer,” the great Catholic short story writer Flannery O’Connor famously compared sentimental works to pornography.

We lost our innocence in the fall of our first parents, and our return to it is through the redemption which was brought about by Christ’s death and by our slow participation in it. Sentimentality is a skipping of this process in its concrete reality and an early arrival at a mock state of innocence, which strongly suggests its opposite. Pornography, on the other hand, is essentially sentimental, for it leaves out the connection of sex with its hard purposes, disconnects it from its meaning in life and makes it simply an experience for its own sake.

Again, this does not invalidate the genre as a whole. Anders points out several instances in which movies directly address the fact of doomed cities’ human populations, whether by seeing to it that they are kept out of harm’s way, showing the terrible consequences of the disasters, or positioning the heroes so that they are fighting with or on behalf of the people. Evangelicals have rightly been concerned of late with ministering to urban populations, recognizing that cities are not just assemblages of construction but realms where millions of human souls dwell. As it is ever upping the destructive ante, Hollywood would do well to bear this in mind as well.

September 6, 2013
ELSEWHERE: The Theology of Beard Length
Next Post 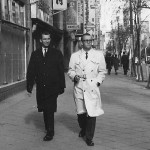 September 9, 2013 The Precarious Validity of 'Pastor Fashion'
Recent Comments
0 | Leave a Comment
Browse Our Archives
get the latest from
Evangelical
Sign up for our newsletter
POPULAR AT PATHEOS Evangelical
1