Steve McQueen and Discovery of the Self

Steve McQueen and Discovery of the Self October 22, 2013 Guest Contributor

One of my favorite passages of prose is the introduction to the British mystery author Agatha Christie’s autobiography. As she looks back on her life, she is struck by the significance of memory. Each memory, great or small, is like a snapshot that captures her true self at a single moment in time. Yet while the true self is revealed in these glimpses, we ourselves cannot fully know the whole self. The passage bears quoting in its entirety:

What governs one’s choice of memories? Life is like sitting in a cinema. Flick! Here am I, a child eating éclairs on my birthday. Flick! Two years have passed and I am sitting on my grandmother’s lap, being solemnly trussed up as a chicken just arrived from Mr Whiteley’s, and almost hysterical with the wit of the joke.

Just moments—and in between long empty spaces of months or even years. Where was one then? It brings home to one Peer Gynt’s question: ‘Where was I, myself, the whole man, the true man?’

We never know the whole man, though sometimes, in quick flashes, we know the true man. I think, myself, that one’s memories represent those moments which, insignificant as they may seem, nevertheless represent the inner self and oneself as most really oneself.

This passage was always in the back of my mind as I worked on a recently finished music video about Steve McQueen, inspired by the same research that led me to write about his conversion to Christianity. The vivid visual symbolism of his films lent itself beautifully to Christie’s comparison of life and cinema. Flick! Here he is, dismounting a horse with cat-like grace. Flick! Here he is, a young street kid flashing his switchblade at all comers. Flick! Here he is, an old cowboy cracking a smile after suffering a savage beatdown.

But where was Steve McQueen himself, the whole man, the true man?

In this video, images from the prime of his youth are juxtaposed with snapshots of his older self. In some of the latter, he is almost unrecognizable. But the eyes give away that it’s the same Steve. Similarly, reflections from those who knew him best at different stages of his life are puzzle pieces that fit into a consistent picture.

What emerges most clearly in his last days is a stripping away, a sifting down of all the qualities that made him who he was. His lesser qualities were chipped and chiseled away, his greater qualities brought into sharper focus. The bright spark of humanity that had always flickered behind those eyes was fanned into a refiner’s fire.

These moments show him baffled, beaten, and on the run, as he himself was always running–from time, from age, from death. But victory came for McQueen only when he acknowledged that he had been defeated. Only then could the work of redemption begin.

In C.S. Lewis’s The Great Divorce, the ghost of a young man allows an angel to kill his pet lizard, a representation of his sinful desires. As the angel breaks the lizard’s back, the ghost reels and gasps, “Ow! That’s done for me,” an utterance with more layers of meaning than he knows. Both the ghost and the body of the lizard disappear. In their place rise a bright, solid man and a magnificent stallion. The man is the ghost’s true self, his whole self. It is himself given back to him. So God gives ourselves back to us, the dross refined, the soul come forth as gold.

Esther O’Reilly is a student of mathematics who writes about music, the arts, theology, and the intersection of faith and culture at Southern Gospel Yankee. She has also contributed to The Retuned. 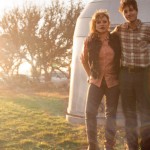 October 22, 2013 ELSEWHERE: Reconfigurable Robots of the Future
Recent Comments
0 | Leave a Comment
Browse Our Archives
get the latest from
Evangelical
Sign up for our newsletter
POPULAR AT PATHEOS Evangelical
1