Is the Proper Christian Response to the Grammys to Walk Out?

Sunday’s Grammy Awards were about par for the course for our beloved and admittedly messed-up pop music culture.  Performance and style ruled the day, perhaps at the expense of artistry and talent.  A few performers delivered the “shock-value” acts that we’ve come to expect from awards shows, vying to deliver the most attention-grabbing, publicity-worthy performances, including a mass wedding of heterosexual and homosexual marriages. Because if there’s one thing pop music loves, it’s love, acceptance, and non-judgmentalism.

But Katy Perry’s “satanic” song and dance isn’t really all that shocking when you remember that Nicki Minaj performed an exorcism at the 2012 Grammys.  And Beyonce and Jay-Z’s sexy routine isn’t that surprising when you consider Rihanna and Drake’s performance in 2011. It’s not news that pop music’s definition of “love” is ooey-gooey and ill-defined, or that the way the music industry values marriage might not be exactly sacramental.

This is pop music we’re talking about.  This is the same award show that was so non-judgmental that they invited Chris Brown to perform, just three years after he was charged with physically assaulting Rihanna.

Apparently, though, Christian recording artist Natalie Grant — who was up for Best Gospel/Contemporary Christian Music Performance for Alive (Mary Magdalene) and Best Christian Music Song for Hurricane — was surprised.

After documenting on Facebook her journey to the Grammys (“Roots painted … check. Hair cut (4 inches!!!) … check. Dress picked … check. Now to find the perfect shoes.”), she continued the play-by-play that evening.  Midway through the event, she posted:

We left the Grammys early. I’ve many thoughts about the show tonight, most of which are probably better left inside my head. But I’ll say this:

I’m pretty cynical, but I’m not cynical enough to think that Grant’s Facebook post was purely a publicity stunt.  She’s a recording artist who posts a lot of personal stuff on Facebook, and this was just a continuation of that pattern.  Not as an attention-grabbing stunt, but as a part of an ongoing conversation with her fans, which is probably motivated both by PR strategy and by a desire to make a positive Christian influence.

Regardless, it worked as a publicity stunt.  And when Grant realized what a hurricane of response she’d set off, she responded in mostly commendable ways: reiterating on Facebook that she did not condemn any specific performance, just that she had a lot of thoughts that were best left inside her head.

Unfortunately, some media outlets were more than willing to fill in the blanks Grant left.

The first article about her decision that popped up in my Facebook feed used disrespectful language to describe in detail exactly which performances might have been offensive: calling Beyonce Jay Z’s “bodacious bride” and describing her “ample bethonged derriere”; deciding that Katy Perry’s success has led her to circle “the vortex of hellish behavior for years”; and demeaningly referring to Madonna simply as “menopausal.”

Grant’s decision to leave, and her decision to post on Facebook about it, were probably well-intentioned, but that doesn’t mean they were wise.  In fact, maybe it wasn’t just her many thoughts about the evening that were “better left inside her head” — maybe she should have also left inside her head the very fact that she had those thoughts.

Despite her best intentions, I fear that Grant’s post comes across as holier-than-thou.  As my friend Laura Turner tweeted, “It reminded me of Christian friends who asked others not to cuss around them in HS. So showy.”

I can’t help but wonder if a more appropriate response would have been to leave without saying a word.  After all, didn’t Jesus tell us to do our praying in private?  And when we do good works, not even to let the right hand know what the left hand is doing?

I can’t help but wonder if a more appropriate response would even have been to stay. Christians are not so holy that we can’t bear to be around offensive behavior — and we shouldn’t expect a secular event to conform to our standards of morality.  Jesus was holiness incarnate and he happily rubbed shoulders with the most despised sinners of his day.

Maybe the most loving thing to do would have been to stay — to look for redemptive possibilities, or to make personal connections with the beloved, made-in-the-image-of-God humans in the audience and on the stage.

For you to reach out

And take a hold of love. 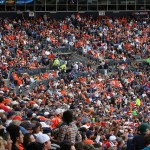 January 30, 2014
Do You Struggle with Sports Idolatry? Cultivate Sports Atheism
Next Post

January 31, 2014 In Light of Macklemore's Same Love, the Church is Called to a Different Love
Recent Comments
0 | Leave a Comment
Browse Our Archives
Related posts from Christ and Pop Culture