Walking with the Dead: The Trauma and Healing of Community

Walking with the Dead: The Trauma and Healing of Community February 12, 2014 daviddunham

How does someone survive psychological trauma? It’s more than a theoretical question for those struggling to survive the zombie apocalypse. The ubiquity of death, threat, and despair has the potential to scar even the most mature psyche. For many people confronting their trauma is their only chance of survival.

There’s so much more to fear in the zombie apocalypse than just the dead. What makes The Walking Dead so fascinating is its exploration of the life and humanity of its survivors. It’s possible to be alive and yet be more like a zombie than a person. Regular viewers have seen this dynamic often at play in Michonne’s life. Her toughness and unwillingness to let others in has at many times suppressed her humanity. It has taken her a significant amount of time and effort to develop relationships with the people in the prison. And in episode nine of season four she almost reverts to her emotionally suppressed state.

With the prison destroyed and our main characters on the run, Michonne immediately shifts into default mode. She finds herself some new “pets” and begins walking. She is alone again. Surviving like she did before she met Andrea at the end of season two. She sees footprints in the mud going away from the prison, but she refuses to follow them. Alone is better, since you can’t lose what you don’t have. She stabs Herschel’s zombie head as a signal that she’s truly leaving the prison and all it represents behind. Before long she finds herself in the middle of a zombie herd, following along like a lifeless walker herself. She has shut down, she has locked away any pain or grief she had.

The reality of living within community in a broken a world is that it creates the potential for trauma. We can harm one another, or we can simply encounter the pain of loss. Community is dangerous to our psyche is some ways. Michonne experienced this reality even before we meet her. In a bizarre dream sequence she reminds herself of the loss of a son, of a friend, and a lover. It’s a community that failed her and a community that she misses. In the dream sequences we see her lover giving up on life. “Why,” he asks, “should we keep living?” The dream and Michonne’s later monologue in the dinner suggest that he killed himself and killed their son. That community betrayed her, failed her, abandoned her, and yet she misses it. She says plainly, “Mike, I miss you.”

Carl is going through his own emotional struggle. As the episode opens we see a Carl who is angry and resentful towards his father. As Rick lies at death’s door unconscious, Carl yells and screams at him, saying, “I don’t need you to protect me – you probably couldn’t protect me anyways.” He lists off all the people that Rick couldn’t protect, including Judith and Herschel, and finally his mother. Like Michonne, Carl abandons community. “I’d be fine if you died,” he says. But both Carl and Michonne, by the end of the episode come to a realization: they need community.

The reality of a broken world is that while community creates the potential for trauma it is also essential to overcoming psychological trauma. A common approach to counseling victims of trauma is to urge upon them honest confession and discussion. Group therapy aims at cultivating solidarity among victims. Instead of focusing on symptoms, many of the best models of therapy focus on contextualizing stress and utilizing relational networks to foster healing. By the end of the episode both Carl and Michonne realize this.They need others to fuel their survival, not just physically, but emotionally. Carl needs his dad, in fact he needs him so much that even when he thinks Rick has turned he would rather be bitten than live alone. He puts his gun down and turns his head, exposing his neck to his father, waiting for the bite. When he realizes that his dad is still alive he cradles his head pressing his own against him. Their relationship will bring him healing. It’s the same thing that happens to Michonne. She awakens to reality when she sees her zombie doppelganger. She has a choice, she can be just like this real life zombie, walking mindlessly in the midst of the herd, or she can choose life. She slays all the zombies around her, even her pets, in a dramatic demonstration of her choice to live. She goes back to the muddy trail and follows the tracks, finding Carl and Rick again. Her own healing begins even before she weeps outside the window at the sight of them. Community creates the potential for trauma, but it also provides the context for healing.

We are bound together, created for the purpose of community. We need each other. Even while we readily acknowledge that we can hurt each other, we can’t really survive without each other. There’s a choice our characters have to repeatedly make, not too different from the one we have to make, will we isolate ourselves from others or will we risk the investment of community. Will they become pre-dead zombies, or will they live in community?

February 11, 2014
The Kiddy Pool: Philip Seymour Hoffman and the Paradox of the Loving Addict
Next Post 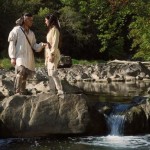 February 12, 2014 'Alone Yet Not Alone' and the Racial Tone-Deafness of Conservative America
Recent Comments
0 | Leave a Comment
"Radford made a connection between Ender and Hitler.Another possible connection: Could Card have been referring ..."
Raymond Z ‘Ender’s Game,’ Genocide, and Moral Culpability
"Faith is the confidence that what we hope for will actually happen; it gives us ..."
Smiley M.M. Music Matters: David Bowie, Still Not ..."
""that many of us do not accept that a few cells of human DNA constitute ..."
myintx How I Changed My Mind About ..."
"No thought given to the unborn child whose life was 'silenced and oppressed'... sad."
myintx How I Changed My Mind About ..."
Browse Our Archives
get the latest from
Evangelical
Sign up for our newsletter
POPULAR AT PATHEOS Evangelical
1