9.5 Theses On Being A Sanctuary Denomination

“[One] who will not help or support others unless they can do so without affecting their safety or their property will never help their neighbor.” – Martin Luther, 1527

I. Sanctuary means the provision of shelter: Congregations and institutions of the ELCA either currently are able to offer shelter or can be modified to do so; shelter is offered according to the needs of our neighbor.

Although the resolution from the New York Synod lists this first and then goes on to outline an expanded definition of sanctuary, the expansion of sanctuary is not meant to detract from the core practice of sanctuary (shelter) but rather to allow shelter to be a center from which even wider practices can be encouraged and celebrated.

Jennie Bell of Church World Service, asked how a denomination declaring sanctuary would aid their work, says: “I would say that it means that anyone who needs safety and protection can find it in a ELCA church. In light of the mass shootings I think this offers enormous opportunities not only around the issue of immigration but also racial violence.”

II. Most congregations will balk at offering sanctuary as shelter: and the tiptoeing around this ecclesial fragility will potentially weaken any polity or churchwide changes.

Mireya Reith of Arkansas United, an organization empowering Arkansas immigrants through advocacy and service, asked how a denomination declaring sanctuary would aid their work, says: “Mississippi proves, you have to be prepared. So in the worse case scenario immigrants know they have somewhere to turn. Also it reclaims the word sanctuary which has been given a bad name, especially, intentionally, after SB411 [an anti-sanctuary municipalities bill in Arkansas that passed this spring]. So much so, even ally mayors have been nervous about doing anything publicly with immigrants and we almost lost the whole voter registration requirement for city commissions for Fayetteville because of SB411. We need a movement to reclaim sanctuary & welcoming & it has to start somewhere & makes sense it would be churches where concept of sanctuary began. And even in those cases where it is not necessary to host immigrants in sanctuary, it is a commitment by your church to the broader support immigrants need in this enforcement environment, like rapid response, ICE watch, services for families who have been separated from loved ones due to enforcement policies”

“Honestly, the Churchwide votes seem to me mostly opportunities for guilty white people to feel better without any real obligations on their parts. While you would advocate for going farther, I actually think we went too far. The apology, Emmanuel 9, and yes, even the Sanctuary memorial are so much posturing without having done the real work of anti-racism and dismantling of white privilege. I get that Churchwide is supposed to be inspirational and maybe even aspirational. What I don’t think it should do is make us think we’ve arrived when clearly we have not.”

“Dismantling white privelige” always has a concrete meaning – it is fear mongering in the abstract; life-giving to all in the concrete.  Here it means – organize your actions in such a way that you protect the most vulnerable.

V. Undoubtedly, sanctuary is also much more than direct shelter. It is also all the other things that include accompanying and caring for immigrants; and not just immigrants, but also other peoples needing shelter, protection, and safety. All letters currently emerging from the ELCA, bishops, and pastors that encourage these practices are welcome also, as long as they are not designed to soften or tiptoe around the central practice of sanctuary: offering shelter.

We neglect the cross when we do not offer shelter to the needs of our neighbors;

We neglect the cross when we are unable to offer shelter or fails to make provision to do so;

We neglect the cross when we succumb to the congregational and institutional habits that prevent us from offering shelter;

We neglect the cross when we say “sanctuary” and do not mean the provision of shelter.

VIII. Sanctuary is also all the things the synod and denominational resources go on to say. We can learn from them, as well as from the resources at sanctuarynotdeportation.org

IX. We have to work from the text of the resolutions, not from people’s subjective perceptions of what the assembly “meant” by the resolutions. We cannot pull a Bill Clinton and say, under duress, “It depends on what the meaning of ‘is’ is.” When we start asking ourselves, “What does sanctuary really mean?” we need to let our yes be yes and our no be no. Sanctuary is sanctuary. Sanctuary is the provision of shelter.

For everyone’s edification, below are the two resolutions on sanctuary, the first brought from the Metropolitan NY Synod TO the ELCA, the second the resolution which finally passed AT ELCA churchwide. These are long. I have some colleagues and others who were present at the assembly who have been arguing for what the assembly really “meant” by the final resolution, but since most of us weren’t at the assembly, we have to work from the text of the resolutions, not from people’s subjective perceptions of what the assembly “meant” by the resolutions. Towards that end, here are the resolutions themselves. My hope is we will interpret them in the strongest, most proactive way possible that moves us towards providing shelter, safety and protection for our immigrant neighbors that is also advocacy and sensitive to the wider set of needs that result in people needing sanctuary.

RESPONSE to raids, detentions, deportations, and the criminalization of immigrants and refugees; a

STRATEGY to fight individual cases of deportation, to advocate for an end of mass detention and amplify

VISION for what our communities and world can be; and a

our faith communities; and be it further

RESOLVED that the Metropolitan New York Synod declare itself one of the first major metropolitan Sanctuary Synods of the ELCA ready to help protect refugees and undocumented people from arrest and deportation by Immigration and Customs Enforcement officers (ICE), in partnership with organizations like Lutheran Immigration and Refugee Service, The New Sanctuary Coalition, The New York Immigration Coalition, New York Legal Aid Society, and the ELCA’s AMMPARO program by:

Advocating for just immigration policies, including fairness in admitting and protecting refugees; and be it further

RESOLVED that the Metropolitan New York Synod endorse, fully support, and help train congregations seeking to be sanctuary congregations, creating a network of sanctuary in our synod, whose work would include but not be limited to:

Reach out to nearby immigrant congregations or communities,

Expand or redevelop existing programs with a focus on reaching out to immigrants and refugees,

Create and distribute “Know Your Rights Cards” to undocumented persons,

Reach out and network with other sanctuary congregations to share support and information,

Train in and participate in accompaniment program,

Participate in the ELCA’s AAMPARO program for unaccompanied minors,

Encourage participation in “Jericho Walks” around Federal Plaza, and

Host Immigration Consultations with legal professionals for immigrants; and be it further

To receive with gratitude the memorial from the Metropolitan New York Synod concerning sanctuary;

and refugees and to the policy questions involved, as exemplified most recently in the comprehensive strategy Accompanying Migrant Minors with Protection, Advocacy, Representation and Opportunities (AMMPARO);

To recognize that the ELCA in congregations, synods and the churchwide organization are already taking the actions requested by this memorial; and

To request that appropriate staff on the AMMPARO team, LIRS and the

existing strategies and practices by the five current sanctuary synods and develop a plan for additional tools that provide for education and discernment around sanctuary;

The Evangelical Lutheran Church in America declares itself a sanctuary church body; and

To request the ELCA Church Council, in consultation with the appropriate

churchwide units and offices, provide guidance for the three expressions of this church about what it means to be a sanctuary church body and provide a report to the 2022 Churchwide Assembly

August 13, 2019 The New Moral Minority
Recent Comments
2 Comments | Leave a Comment
"Clint was describing what he sees. How does that translate into disliking?" We grow spiritually ..."
Joe Cage If You’re Evangelical It’s Time For ..."
"I remember a guy who came over to me out of the blue and asked ..."
Karen Silver Answering the question: Do you know ..."
"nice."
Brandon Roberts Ten Things Christians Can Learn From ..."
"Thanks. Clear and persuasive. I appreciate your work."
Harvey James Johnson Ten Things Christians Can Learn From ..."
Browse Our Archives
Related posts from Clint Schnekloth 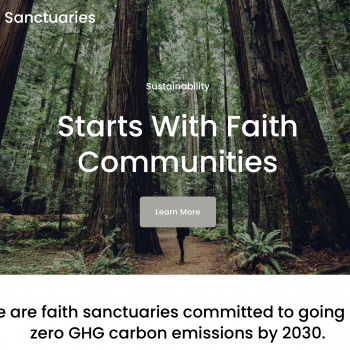 Progressive Christian
Sanctuary: Being Christian In the Wake of Trump
Clint Schnekloth