The Book of Strange New Things by bestselling author Michel Faber is a new novel (Oct 28, 2014) that delves into the psyche of a Christian missionary who travels impossibly far from his beloved wife to bring hope to some weird alien beings.

Those of us who are puzzled by or even scornful of what believers call “faith” may gain a sympathetic understanding from this atheist’s beautifully written novel.

Faber, the Dutch-born, Australian-reared, Scotland-based author of several novels, including the huge bestseller and delicious reading experience The Crimson Petal and the White, doesn’t write a dull paragraph. This long book (480 pages) wasn’t long enough for me. Reading an advance copy on my laptop, I kept fearing it would end, but it didn’t end until it was ready to.

The world Faber created felt so full and real that it wasn’t until hours later that I realized there were several loose ends. I’d absolutely read a sequel.

The odd thing about my reading of The Book of Strange New Things was that the protagonist was so nuanced, an ardent Bible-quoting believer who nonetheless wasn’t inflexible, whose love for his wife didn’t make him impervious to being attracted to a human colleague on this other world, that I kept thinking Michel Faber was probably a Christian. But no, I found this excerpt online, from a 2008 interview by Helen Brown in The Daily Telegraph (London):

Baptised at 11 (“Did I feel transfigured or just wet?”), Faber lost his faith early. “I left my parents a letter explaining that I didn’t believe in God. The more I read, the more I felt that we were dealing with myths: human attempts to come to terms with the big challenges of life. My parents were very upset. My mother said: ‘This means we won’t meet you in heaven.’ For years I was quite a militant atheist. I wanted to burn down all the churches or turn them into second-hand record emporiums.”

He softened in his thirties. “I don’t have any faith myself, but I think that religion is here to stay. When you go to buy a paper you have to accept that the newsagent believes he’ll go to a paradise after he dies where there are virgins running around, or he believes the world was created in seven days . . . there will be some belief that doesn’t make any scientific sense. That doesn’t mean you can’t buy a newspaper from him or ask how his kids are.”

Faber recently attended an art exhibition at his local church and was moved when the rector told him: “If you see anybody else out there who looks hungry, just bring them in.”

“It is sinful to be too cynical about that,” Faber remarked. “My feelings are a bit schizophrenic. I get increasingly respectful of people who have faith and increasingly creeped out by them.”

I expect that Faber’s own efforts to comprehend alien ways of thinking (both human and otherwise) contributed to the depth and detail we see in The Book of Strange New Things. He has managed to create a novel that is science fictional, quite suspenseful, and profoundly literary all at the same time. Up to the minute too, as far as what’s going on back on our overheated, disaster-prone, greedy and crime-filled home world.

June 28, 2014
On Finally Learning to Meditate (For a Few Seconds)
Next Post

September 21, 2014
Recent Comments
0 | Leave a Comment
Browse Our Archives
get the latest from
Nonreligious
Sign up for our newsletter
POPULAR AT PATHEOS Nonreligious
1

'No gratuitous violence in the Bible,'...
The Freethinker
Related posts from Creative Atheist 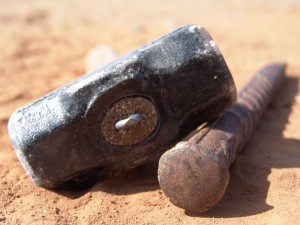