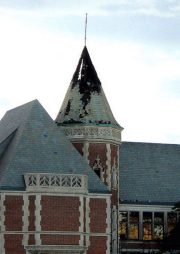 Christianity claims to be able to answer the Big Questions of Life®. I can buy that, but anyone (or any religion) can answer them. It’s whether the answers are credible that matters.

For discovering reality, religion comes up short. Surprisingly, we rarely turn to science, the discipline that has faithfully answered so many other questions. But science can help with the Big Questions, too.

For example: Why are we here? Science can answer that: we’re here for no more cosmically-significant reason than why deer, jellyfish, and oak trees are here.

For example: Where did we come from? Science has some remarkable answers (Big Bang, evolution) and still has a lot of work to do in other areas (string theory, abiogenesis). Science never answers anything with certainty, but the scientific consensus, where there is one, is the best explanation that we have at the moment. The retort “Well, if Science can’t answer it, my religion can!” is not a meaningful answer. Sure, your religion may have an answer, but why trust its answer over the incompatible answers of the other religions?

For example: What is my purpose? There is no evidence of a transcendental or supernatural purpose to your life. One great thing about rejecting dogma is that you get to select your own purpose! And who better than you to decide what that is?

For example: What will happen to me after I die? There’s no evidence that anything more remarkable will happen to you than happens to a deer, jellyfish, or oak tree when they die.

And so on. Science has answers; it’s just that religion doesn’t like them.

Science has only one reality to align itself with. By contrast, each religion makes up its own, which is why they can’t agree. Science provides answers and doesn’t demand faith to accept them.

Think about a church steeple with a lightning rod on top. The steeple proclaims that God exists, and the lightning rod says that it can reduce lightning damage. Which claim provides the evidence to argue that it’s true? Religion makes truth claims and so does science, but science takes it one step further: it actually delivers on its claims.

Religion … well, not so much.

(This is a modified version of a post originally published 9/2/11.)

August 22, 2012
The Parable of the Professor and the Rocks
Next Post