Do We REALLY Trust in God?

Do We REALLY Trust in God? August 31, 2012 Bob Seidensticker 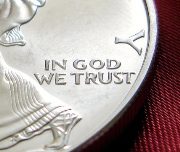 Is it really true that “In God We Trust”? With what do we trust him? It might indeed make Christians feel warm and fuzzy to see that motto on U.S. currency, but do they actually believe it?

That is, who would actually trust that God will take care of important things without some sort of safety net?

Indeed, the government has made clear that that’s not the way things work. In response to preventable deaths among minors within the Followers of Christ church, Oregon recently removed laws protecting parents who rejected medical care for their children in favor of faith healing.

As noted in the excellent American Humanist article “In God We (Do Not) Trust,”

It is tantamount to the state saying, “Sure, it looks great on a coin, but come on you idiot, it’s not as though this god stuff actually works.”

For atheists, “In God We Trust” on currency and as the official motto of the United States is one of those pick-your-battles things. It’s in blatant violation of the First Amendment (“Congress shall make no law respecting an establishment of religion …”), but issues such as injury from faith healing are more important and deserve more attention.

But let’s look for a moment at what we discarded to make room for this motto. E Pluribus Unum (Latin for “Out of many, one”) was the de facto motto before the adoption of “In God We Trust” in 1956. That certainly showed those atheist commies which side of the theological fence we were on, but this came at a price.

One trait that is special about America is that we’re composed of people who came from all over the world to pull in the same direction to make a great country.

Out of Many, One. Which country would this motto fit better than America? Out of Many, One—a custom-made inspirational reminder of who we are and where we came from.

And we flushed it down the toilet in favor of “In God We Trust,” a one-size-fits-all poncho that could be worn by a hundred countries.

(This is a modified version of a post originally published 9/23/11.)

August 29, 2012
Probability Proves Bible Prophecy (or Not)
Next Post

September 3, 2012 What Makes a Good Prophecy (and Why Bible Prophecies Aren’t)
Recent Comments
0 | Leave a Comment
Browse Our Archives
get the latest updates from
Cross Examined
and the Patheos
Nonreligious
Channel
POPULAR AT PATHEOS Nonreligious
1

Nonreligious
You know the photo that came with your...
Cross Examined