Probability Proves Bible Prophecy (or Not) 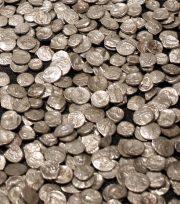 Now and again I come across bold statements that are widely accepted within Christian circles, but they’re often passed along without evidence, like urban legends. The Christian who shares them usually doesn’t know why they should be believed.

For example, the claim that Mark was the assistant to an eyewitness and wrote the gospel named Mark (I wrote about that here).

That the apostles wouldn’t die for a lie (I wrote about that here).

And that the probability of just eight of Jesus’s 300 fulfilled prophecies coming true randomly—that is, without him being the real deal—is 1 in 1017.

Cover the state of Texas in silver dollars two feet deep and find a particular one, blindfolded, by dumb luck—that’s the equivalent probability. In other words, probability shows the reliability of the evidence for Jesus. Who’s going to argue with probability?

At least, that’s the question we’re meant to focus on. The proper question: Who says the probability is 1:1017? And what was the calculation?

I finally had a chance to explore this claim when I recently stumbled across the source, Science Speaks by Peter Stoner, originally published with a different title in 1944. The online version is here (go to chapter 3).

The computation examines eight different prophecies, determines the likelihood of their happening to anyone, and then multiplies them together to get the minuscule 1:1017.

Stoner was the chair of the departments of Mathematics and Astronomy at Pasadena City College, so he should know something about reasoning. Let’s step through these eight prophecies and see.

Let’s ignore the fact that a character in a book about Israel was far likelier to be born in Bethlehem than in Bermuda, Brazil, or Borneo, so comparing Bethlehem against the rest of the world is unrealistic. Let’s also ignore that Stoner simply assumes that Jesus was divine.

At least we have it on good authority that the Micah reference, “out of you [Bethlehem] will come … one who will be ruler over Israel,” actually refers to Jesus, because the gospel of Matthew says so (Matt. 2:6).

Or do we? When you actually read Micah 5, it is clear that this ruler of Israel will be a warrior who will turn back the Assyrians, the empire that began conquering Israel piecemeal beginning in 740 BCE. “Your hand will be lifted up in triumph over your enemies, and all your foes will be destroyed” (Micah 5:9) doesn’t sound like any event in the life of Jesus.

Additionally, Stoner takes the historical accuracy of the gospel story as a given, but why assume that? The authors of Matthew and Luke were obviously literate, and they would have read Micah. Did they accurately record Bethlehem as the birthplace of Jesus, or did they just throw in Bethlehem to jazz up the story with a “fulfilled” prophecy?

2. Jesus didn’t enter Jerusalem carried in regal splendor but riding humbly on a donkey (Zech. 9:9). Stoner asks: Of all the men who entered Jerusalem as a ruler, what fraction did so on a donkey? He gives this a probability of 1 in 100.

But again, this simply assumes the historicity of the gospel story. It’s like asking, “How many people who walked the Yellow Brick Road did so after landing on a witch in a house?”

Let’s take a closer look at Zech. 9:9. It says that the victorious king will come

lowly and riding on a donkey,
and on a colt, the foal of a donkey.

What are they saying here? Is this a mother donkey with its colt? No, this is synonymous parallelism, a poetic form found in the Old Testament, where the last line simply echoes or restates the previous line.

All four gospels have Jesus enter Jerusalem on a donkey, and Matthew and John both mention the prophecy. But Matthew doesn’t understand the poetic structure and thinks that it means two donkeys: “They brought the donkey and the colt and placed their cloaks on them for Jesus to sit on” (Matt. 21:7).

What’s more likely—that Jesus rode two animals like a circus acrobat or that Matthew was inventing the fulfillment of a prophecy?

And like the previous prophecy, the king is a warrior. This time, his domain after his victories will extend from sea to sea, which (again) doesn’t match the Jesus of the gospels.

The gospel fulfillment (Matt. 27:9) refers to Jeremiah, not Zechariah. Oops—I guess divinely inspired authors are only human. But even when we find the reference in the correct book, the Zechariah story has nothing to do with betrayal.

And so on. There’s no need to dig into the remaining prophecies; you see how this plays out. Not only are these “prophecies” poor matches for the Jesus story, the probability calculations for these eight examples simply beg the question by assuming that the gospels are history (which is the question at hand) and make meaningless estimates of probability to create the fiction that actual science is going on here.

Are we dealing with actual prophecies? No—the allusions to Old Testament stories are easily explained if we suppose that the authors of the gospels simply searched the Scriptures for plot fragments that they could work into the Jesus story. The probability calculations are meaningless.

Don’t suppose that the gospel authors were journalists writing history. Scholars don’t categorize the gospels as biography but as ancient biography, which is not the same genre. An ancient biography isn’t overly concerned about giving accurate facts but with making a moral point.

August 31, 2012 Do We REALLY Trust in God?
Recent Comments
91 Comments | Leave a Comment
Browse Our Archives
get the latest from
Cross Examined
Sign up for our newsletter
POPULAR AT PATHEOS Nonreligious
1