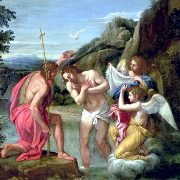 Psalm 22 is one of the most popular places to look for the supposed Old Testament prophecies fulfilled by the life of Jesus. Apologists claim that it closely parallels the crucifixion story but was written roughly 1000 years earlier.

The very first verse of this chapter is, “My God, my God, why have you forsaken me?” which are the last words of Jesus according to Matthew and Mark.

Verse 7: “All who see me mock me; they hurl insults, shaking their heads. ‘He trusts in the Lord,’ they say, ‘Let the Lord rescue him.’” Sure enough, Mark records the onlookers insulting Jesus and mocking his inability to free himself.

Verse 16: “they have pierced my hands and my feet” sounds like the crucifixion. This form of execution was practiced by many cultures in the Ancient Near East for centuries before the time of Jesus, but it probably didn’t go back as far as the writing of this psalm. In that case, this verse looks prophetic.

Verse 18: “They divide my garments among them and cast lots for my clothing,” as noted in Mark.

These are some clear parallels, but what best explains this—that this ancient psalm really did predict the crucifixion or that the gospel story was deliberately written to mimic a prophecy? The author of Mark was surely familiar with this psalm and could’ve added the distribution of the clothes, the mocking from the crowd, and the last words.

But what about the piercing of the hands and feet? It may not say that. A better translation may be, “like a lion they pin my hands and feet.” The NET Bible’s comment:

Make that change and see what verse 16 says:

wild dogs surround me—
a gang of evil men crowd around me;
like a lion they pin my hands and feet.

No longer do we have a good parallel to the crucifixion story. (Let me note, however, that there are arguments for each interpretation of the verse.)

Let’s reconsider those last words: “My God, why have you forsaken me?” Does forsaking Jesus sound like part of God’s plan? This doesn’t sound like the cool-headed, in-control Jesus written about in Luke and John.

What it sounds like is Gnosticism (not in the Psalm, but when transplanted into the gospels). The Gnostic Gospel of Philip (third century) explains it this way, “‘My God, My God, why, lord, have you forsaken me?’ [Jesus] spoke these words on the cross, for he had left that place.” That is, Christ the god entered Jesus the man at baptism (remember the dove?) but then abandoned Jesus at the crucifixion.

What about the skipped verses?

Now consider the entire chapter. The apologetic claim rests on picking intriguing little fragments out of context, but taken as a whole this looks even less like the crucifixion story.

Verse 12: “Many bulls surround me; strong bulls of Bashan [a place known for its cattle] encircle me. Roaring lions tearing their prey open their mouths wide against me.” Bulls and lions? That sounds like martyrdom in an arena, not crucifixion.

Verse 17: “I can count all my bones.” This unfortunate guy is clearly mistreated, but (again) this isn’t the gospel story.

And the biggest problem with shoehorning of Psalm 22 into the gospel story is that there’s no reference to the resurrection! How can this be the story of the sacrifice of Jesus without the punch line?

To argue with a person who has renounced the use of reason
is like administering medicine to the dead.
—  Thomas Paine

September 3, 2012
What Makes a Good Prophecy (and Why Bible Prophecies Aren’t)
Next Post