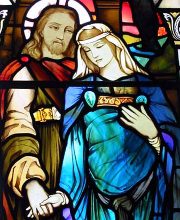 You’ve probably heard of the papyrus document christened by some “The Gospel of Jesus’s Wife.” That’s a big title to put on a scrap the size of a credit card, but note that most of the handful of papyrus manuscripts dated to the earliest days of the church aren’t much bigger.

The phrase of interest in the manuscript is, “Jesus said to them, ‘My wife.…’”

Was Jesus saying, “Take my wife, please”? We don’t know the context because the scrap has just 33 words on both sides.

The document is written in Coptic and is thought to have come from the fourth century CE, but it appears to be a translation of a Greek document from the second century.

Though the document has declared authentic by some experts, more work remains before the relevant scholars can reach a consensus. One of the most compelling arguments in favor of its authenticity is that very few people would be able to create such an excellent hoax. The hoaxer would have to be a scholar himself.

On the other hand, this isn’t beyond consideration. The provocative 1973 discovery The Secret Gospel of Mark is thought by many to be a hoax created by the very man who first reported the find.

Many Christians have been eager to discount this discovery. Not only might it be a forgery, there are other issues.

The second century was a time when marriage was debated within the church. The apostle Paul discouraged children. He made clear that marriage was second best and that chastity was preferable (1 Cor. 7). Marriage wasn’t even a Christian sacrament until the twelfth century. The Gospel of Jesus’s Wife could be an important data point in our understanding of the changing views of marriage in the early church.

The Christian commentary that I’ve read is antagonistic to the idea of a married Jesus. That shouldn’t be surprising, I suppose. There’s a lot at stake here. The Roman Catholic Church has reiterated its ban on both women and married men as priests, using the life of Jesus as a model. A married Jesus (which, after all, would have been the state of a typical Jewish man during that time) might also add weight to the Adoptionist view of the early Jesus, where Jesus was simply an ordinary man who was adopted by God because of his sinless devotion.

But Jesus being married shouldn’t cause too many problems since his dad was married as well. Like Father, like Son? The solitary Yahweh is a late development, and before the Babylonian exile (586 BCE), Yahweh was often paired with Asherah (or Astarte, Ashtoreth, or Ishtar). This pairing is explicitly seen in extra-biblical evidence, but we do see clues within the Bible. King Josiah reformed Judaism to allow only Yahweh worship, but these reforms document that Asherah worship happened within the Temple (2 Kings 23:4–7).

Here’s what I find odd about Christian pushback against this new evidence. They skillfully point out the weaknesses in the argument, and good for them. Our goal should be to set agendas aside and discover if this document is genuine and, if so, what to make of it. But why can’t they be just as skeptical about the tenuous claim that the gospel of Mark was written by a companion to Peter, who was an eyewitness (I explore that here)? Or be that skeptical about the “Why would they die for a lie?” claim that the apostles’ martyrdom points strongly to the historicity of the gospel story (I explore that here)?

We all have our biases. Maybe the many Christians who play both sides of this question—earnest about evidence they like and skeptical about what they don’t—honestly don’t see the hypocrisy. But then my job is to gently tell the Christian that he’s got something green stuck in his teeth.

September 24, 2012 The Prayer Experiment, Week 1
Recent Comments
0 | Leave a Comment
Browse Our Archives
get the latest updates from
Cross Examined
and the Patheos
Nonreligious
Channel
POPULAR AT PATHEOS Nonreligious
1