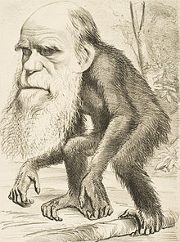 Why were the Nazis so unpleasant? Because they were force-fed evolution, of course! Christian podcaster Greg Koukl thinks that he’s uncovered the missing link.

In a 2011 Stand to Reason podcast (starting at 5:00), Koukl spoke of being informed that all German soldiers during World War II were issued two books, Goethe’s Faust and a German translation of The Origin of Species. And it was Hitler himself who insisted that they get them.

About the logic behind Hitler’s assigning these books, Koukl says:

It’s because the ideas in The Origin of Species served [Hitler’s] purposes well, and if a person actually believed what Darwin taught, then they would make good Nazis.

My first complaint is that Koukl accepted the story uncritically. This story nicely supports his worldview that evolution is both harmful and wrong, so he passes it on with no fact checking. I do my best to take the opposite approach: when I find a delicious story that skewers an opponent (either a person or idea), I want to make sure that I have strong evidence so that I don’t look ridiculous after passing on flawed hearsay.

In doing my own research on books issued to German soldiers, the only page I came across was a post in another atheist blog who’d heard the podcast and asked the very same question. That blogger raised a great point: Why issue those two books but not Hitler’s own Mein Kampf?

And remember that Nazis liked to ban books. Or burn them. The official Nazi library journal in 1935 listed twelve categories of banned books. One category was:

Writings of a philosophical and social nature whose content deals with the false scientific enlightenment of primitive Darwinism and Monism.

Let’s move on to Koukl’s ill-informed ramblings on evolution. One of Koukl’s favorite ploys is to try to tie eugenics with evolution.

First off, Darwin himself rejected eugenics. In The Descent of Man, he said, “No one who has attended to the breeding of domestic animals will doubt that [not culling the inferiors] must be highly injurious to the race of man.” Creationists enjoy quoting just the paragraph that contains this sentence and ignoring the very … next … paragraph where he overturns this argument. (I’ve written more on Creationists taking Darwin out of context here.)

Darwin rejected eugenics, Greg. Of course, you’ll quickly backpedal and argue that Darwin’s own personal opinions say nothing about the validity of evolution. Agreed! Which is why whether or not Hitler kept his copy of Origin under his pillow or had an autographed photo of Darwin on his night table says nothing about the central issue here: Is evolution the best explanation of why life is the way it is?

Which is why this entire topic is simply mudslinging.

“Hitler was bad, and Hitler and Darwin were BFFs! And Darwin was ugly! And … and he probably ate babies! And didn’t recycle!” Whether true or not, this is irrelevant.

This is what one does when one doesn’t actually have a real argument.

Which brings up the last point: Did Hitler base his eugenics policies on evolution? Koukl seems to imagine a sweet and gentle Adolf Hitler, picking up litter and helping little old ladies cross the street, being turned to the scientific Dark Side after reading Darwin. But we don’t need to imagine any such nudging. Germany had plenty of anti-Semitism around already. In fact, Martin Luther himself wrote the violently anti-Semitic On the Jews and Their Lies.

This bypasses the issue: Is evolution correct? Bringing up eugenics is not only flawed but irrelevant.

It’s the white flag of surrender.

[Jews are a] base, whoring people,
that is, no people of God,
and their boast of lineage, circumcision, and law
must be accounted as filth.
— Martin Luther, On the Jews and their Lies, ch. 4

(This is a modified version of a post originally published 9/24/11.)

Nonreligious
A hail of flawed reasoning in our last...
Cross Examined
TRENDING AT PATHEOS Nonreligious