Should an Atheist Pray? 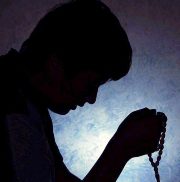 I enjoy polite (or spirited) conversations with Christians. As an out atheist, I’ve attended church small groups and chatted with “Repent or Else!” sign carriers on street corners enough so that I’m rarely surprised by new arguments in favor of God’s existence. Still, the debate keeps me on my toes, and a well-educated Christian can teach me a lot about the church.

When the conversation turns to my atheism, I’m occasionally asked if I’ve ever asked God into my heart. The question never makes sense. Granted, a visitor at my front door ought to wait to be invited in, and perhaps God ought not barge in and force his way into my life. But that’s not the first step. In the case of the visitor at my front door, I have no doubt that that person exists. The Christian always glosses over that first step. Sure, I might ask God into my heart … after I know that he exists.

But my antagonist persists. “Have you tried it? Just try it. Just ask God into your heart.”

You mean, like, right now? Okay—so I try it. I think: God, if you exist, please make yourself known. And nothing happens.

Well, yeah. Of course I wasn’t sincere. I ask God into my heart with the same sincerity as the Christian would ask Odin into their heart. Why would either of us do that with sincerity or enthusiasm?

But what if we dialed it back a bit? Drop the demand for sincerity and just pray. This is the upcoming project of the UK-based Unbelievable radio show and podcast. The instructions for participants are here. In brief:

We are asking each atheist who wishes to take part to pray for 2 to 3 minutes a day for 40 days for God to reveal Himself to them.

I presume the subjects are to go through a test for 40 days to parallel Jesus’s 40 days of trials in the wilderness (40 having the numerological meaning “lots and lots”). The experiment is to run from September 17 through October 26.

But what about that sincerity thing?

We only ask that anyone taking part commits themselves to finding a quiet meditative “space” and praying there for two to three minutes each day as earnestly as they can for any God that there might be to reveal himself/herself/itself to him or her, and that he or she remains as open as possible to ways in which that prayer could be answered.

Okay—I’m in. I don’t expect that I’ll be able to be all that earnest—frankly, I don’t have much expectation of anything supernatural happening or even much desire for God to exist—but I’ll have a go. To any Christian who says that I’m not approaching this with much sincerity, you’re right. As I read it, none is required—as it should be. Sincerity comes after the fact; sincerity is earned.

Let’s take a step back to consider this interesting approach to evangelism. It’s different. More typically, a Christian will advance a particular logical argument for God, and I’ll ask if this is what convinced them that God exists.

“Oh no, of course not,” they’ll usually say.

Okay, if it didn’t convince you, why expect that it’ll convince me?

They almost always became a Christian either because they were raised that way or because they had some sort of mystical experience. They give me intellectual arguments because that’s the best they’ve got; they can’t give me the mystical experience. Maybe we have a parallel with a Zen koan—the koan doesn’t make a lot of sense, but that’s the point. Words are an inept vehicle for conveying the truth of Zen. Are Christian apologetics an inept way of making the case that God exists?

This prayer experiment follows the road less taken. I’ll probably have more to say about walking the walk and whether that’s a reasonable request as I get into the experiment.

Will I do a Leah Libresco? Leah (of the Patheos blog Unequally Yoked) dramatically switched sides, from atheist to Catholic, in June.

No, I don’t think that will happen to me. I don’t read her blog as regularly as I’d like, so I don’t understand her position well, but if I may speculate, I think her personality is such that Christianity appealed to her in a way that it just won’t with me. (And I could be totally wrong in that guess.)

Not only do I think that I won’t convert, I think that that’s impossible. My hypothesis is that atheists like me are stuck in atheism once they get there (I’ve written more here: “I Used to be an Atheist, Just Like You”).

I now have a chance to test that hypothesis.

Taste and see that the LORD is good;
blessed is the man who takes refuge in him.
— Psalms 34:8