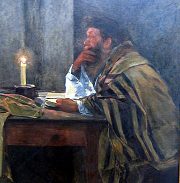 Today’s the big day! It’s the beginning of my 40-day trial by prayer.

I’m to pray for two to three minutes per day as sincerely as convenient and ask God to reveal himself to me. I’m to watch for signs of God’s presence in daily life. For more on this experiment, read my earlier post.

The experiment is in response to a 2010 paper “Praying to Stop Being an Atheist” in the International Journal for Philosophy of Religion. I’d like to pull out from this long paper a few ideas that need critique.

Author T. J. Mawson notes the critique of other scholars of his work: “Mawson’s words are beyond parody.” I wasn’t very impressed with the arguments myself, as you’ll see, but I do appreciate an author who can be that honest and self-deprecating!

In this paper, I argue that atheists who:

(1) think that the issue of God’s existence or non-existence is an important one;

(2) assign a greater than negligible probability to God’s existence; and

(3) are not in possession of a plausible argument for scepticism about the truth-directedness of uttering such prayers in their own cases,

are under a prima facie obligation to pray to God that He stop them being atheists.

Note the similarity between this argument and Pascal’s Wager. Pascal said that betting on God’s existence is the smart bet—if you win, you get bliss in heaven, and there’s not much downside if you lose. But if you bet against God and lose, you get an eternity in hell, and if you win, you can’t even say, “I told you so.”

One way Pascal’s Wager fails is that it ignores how it applies to the challenger as well as the person challenged. The same is true here. Mawson says that atheists ought to pray to an undefined god that they don’t (yet) believe in, but by the same logic, Christians should also pray to god(s) that they don’t yet believe in. This doesn’t negate his argument but says that it applies to him as much as to any atheist.

Now, on to the paper. It claims that atheists praying for God to help them is as reasonable as shouting “Is anyone there?” in a certain dark room. Some say that a wise and helpful old man lives in this dark room, though some say that this claim is false.

I disagree that these are equally reasonable things. Dark rooms and old men are things we’re all familiar with. “There’s a wise old man in this room” many not be a true statement, but it certainly can’t be dismissed out of hand. By contrast, “There’s a supernatural being who created the universe” is implausible on its face.

And if this is supposed to be an analog to religion, why imagine just one room? All gods aren’t sought in the same way. We should imagine many different rooms and perhaps different protocols to represent the wide variety of gods that Mankind conceives.

Mawson assumes that the wise old man is willing to reveal himself. And here again we have a difficulty, since Christians are quick to explain away God’s hiddenness by saying that God might not reveal himself. The simple God hypothesis has expanded to claim that God exists and he desperately wants a relationship with each of us … but he may remain silent despite our pleas. We’re told that God has his own good reasons for remaining hidden (reasons we can’t understand), but how far do we want to go to support this God hypothesis in the face of contradicting evidence? At what point does it go from honest rational inquiry, to support for preconceived beliefs with an unfalsifiable hypothesis?

I will comment more on the paper as the prayer experiment continues, but I’ll wrap up here with an anecdote that the paper concludes with. Atheist Bertrand Russell was asked, “What if you die and find yourself in front of God after all?” Russell said that he would tell God that he hadn’t provided enough evidence for his existence. Mawson imagines God responding, “Well, you didn’t ask me for any, did you?”

And we’re back to the Alice-in-Wonderland God who desperately wants a relationship with us, who knows that our not believing in him will send us to hell, and who knows that he looks indistinguishable from the thousands of other gods that humanity has invented but refuses to do anything to simply make his existence plain.

As a brief aside, let me comment on the Unbelievable podcast that is hosting this experiment. Their approach—praiseworthy, it seems to me—is typically to bring together a Christian and a non-Christian to discuss their different views. The non-Christian might be a Muslim or an atheist. The discussion might be evolution vs. Creationism. Sometimes they have two Christians with two different theological views. What it’s not is simply a sermon to tell the flock what to believe about some aspect of life or Christianity.

Why is this not the model for other podcasts? Reasonable Faith, Stand to Reason, Apologetics.com, Please Convince Me and most other Christian podcasts: I’m talking to you.

Last week I took my third acid trip.
This time I saw God.
Otherwise, it was nothing.
— Paul Krassner

September 19, 2012 Where is the Islamic Renaissance?
Recent Comments
193 Comments | Leave a Comment
Browse Our Archives
get the latest from
Nonreligious
Sign up for our newsletter
POPULAR AT PATHEOS Nonreligious
1